Not A Holiday Monday

The reason it’s not a Victoria Day holiday for me is because T-Man has to work today. So I’m doing exciting things like laundry and continuing weeding my garden, quick before it starts to rain. Again. It’s still pretty cool for this time of year. It warms up some when the sun comes out but you need a light jacket or sweater when it’s hiding behind the clouds again.

We went to Milady Daughter & Milord SIL’s place on Saturday for dinner. Our job was to move her countermarche loom from what will become baby Alien’s room to the current office room. They are definitely nesting and reorganising their home before her “beached whale” time. We had to take the loom apart partially to get it through the doorways but we managed to get it put back together again. Might need a bit of adjustment on the treadle ties when she actually goes to use it. Like most of us who have crafts, computers, camping gear etc., they have a lot of stuff to sort out and to find new places for. A 3-bedroom condo sounds like lots of space but they don’t have a basement, shed, or storage locker to put the things they don’t need all the time but still want to to access without difficulty. It makes me appreciate my detached house all the more, that’s for sure. Old as it is, we have lots of storage spaces: big closets, basement cupboards, cold room, attic spaces, 2 sheds, single detached garage and extra craft rooms bedrooms. The only drawback is the one tiny little bathroom, but we cope.

I wanted to show off the pretty skein I spun from my “backyard” dyes: 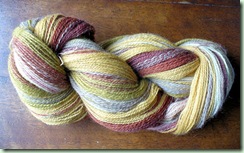 That’s about 625 yards of approximately sock-weight crossbred wool yarn. It’s not super-soft but not bad if you aren’t oversensitive. The 12 colours are chosen from my home-grown madder, rhubarb root, rhubarb leaf, blackberry shoots and leaves. No pre-mordanting except some with rhubarb leaf and a few of the colours were modified with a smidge of copper (olivey green) or iron (grey and taupe) or ammonia (muted red). I decided what order to put them in and measured alternating short and long (28" and 54") lengths. Then I broke each length in half and put them in my organiser folder in order so I wouldn’t get mixed up as to which came next. I spun 2 bobbins as similar as possible on my Victoria wheel. Then I plied them together on my Louet S-90 and tried to match the lengths of each colour but not worrying about the occasional area where they didn’t. You can see those overlapping two-tone effects in the skein. The two bobbins ran out at almost the same time and I wound off the extra bit and joined it in too so I used all of it up. The final skein weighs exactly 150g. And there’s twice as much as I need for the pattern I was thinking of using so now I have to reconsider my plans. It’ll be lace and something scarfish/shawlish, that’s all I can say so far. There’s lots of nice patterns to choose from or I could cobble together my own. Then I have to spin some more yarn for the original project that I had in mind. Awww…

In other knitting news, I’ve nearly finished the Super-Secret Project #1 for Alien. Sorry I can’t share! Yet. Haven’t gotten much further on the Happy Legs tights though, just part of the second leg while the first one is up to the knee. Slow going in favour of the baby stuff, gardening and reorganising my yarn. Along with re-sorting and going through the weaving yarns, one of the baskets that hang on the studio wall just took a nose-dive for no reason, spilling yarn balls all over the floor. I never even touched it! (I think it’s trying to tell me something.) There’s also the leftovers of the fleeces from the Anne Field Workshop that will need to be washed sometime soon. They’re not getting any less stinky sitting around! Not starting on that today though. It’s supposed to rain later and I would prefer to put it outside to dry faster.

Oh and I got some new books. I feel some book reviews coming on. Soon.

really nice colors on that skein!
yeah gardening is a bit challenging these days around here but hey it's 30C back east so If I had to choose , I prefer the cool weather.I really suffered last summer when it reached 38C. Still don't want to sow the beans...great lettuce weather though.