Darling Yarnpiggy of Flying Pig Knits has nominated me for a Beautiful Blogger Award! 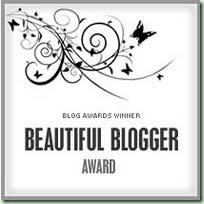 I now have to list 10 little-known things about me and nominate 10 blogs in turn. So are there 10 things you don’t know about me? I have no idea if you’ve heard any of this before, but I’ll do my best.

1. I’m not afraid of snakes, spiders or bats. I think they are cute and actually have a friendly cupboard spider that lives in my kitchen window. When I was a girl I once rowed out in a small boat onto a lake after dark just so I could feel the bats flit around my head. I also caught garter snakes just so I could feel them slither around my wrist.

2. I am afraid of being underground (caves, tunnels, subways, underground parking) but not so much that I can’t go there. I just feel the weight over my head and am uncomfortable until I’m out. Except once I couldn’t go with my family into the Horne Lake Caves on Vancouver Island because they were just too tight! Brrr…

3. I was born with a large mole on my left butt-cheek. My adopted mom used to say it’s how she could tell me apart in a crowd. And I would reply, “A crowd of nude sunbathers!” Yes, it’s still there.

4. My adopted mom only knitted and my birth mom only crocheted (though her mom could do both). I can do both. So can my daughter. So far my granddaughter has knitted a little bit – but then she’s only five. What will impending grandbaby Alien do? And why are the males in the family not at all interested?

5. Speaking of birth mom, I still have a little portion of her ashes on my dresser. Where to finally put them? I haven’t decided yet. There’s also a portion in Mexico, Haida Gwaii, Kamloops and somewhere off Crescent Beach in White Rock. She gets around, eh?

Jeepers! Only halfway there so far. What else about me? Must dig deeper.

6. I have no religion whatsoever. Although I was baptised a Catholic when I was 2 weeks old, I rejected the whole sorry mess when I was 13. Took me until I was 17 to tell my parents though. (Caused a huge kerfuffle in the family.) I try to respect those who do believe, but sometimes it’s hard. The Golden Rule should be all you need to live by.

7. Religion aside, I never knew it growing up but I was adopted into a dysfunctional family. Both of my younger adopted siblings have undiagnosed mental problems which our parents had no tools or help to manage. And to complicate matters, we had my mom’s sister living with us and she too had some issues. However, I knew I was loved and was smart enough to avoid most of the drama and came out of it just fine. I never realised until much later how crazy it really was.

8. I don’t like to be ordered around or told what to do. I hate having someone looking over my shoulder or watching me work – unless I’m purposely demonstrating. I’m happier if I know exactly what is expected and when it’s due and left to accomplish the task without supervision. Probably why I don’t have a Real Job, huh?

9. I’ve always thought of myself as a Plain Jane. T-Man thinks I’m beautiful though so maybe my perception is wrong? I think beauty is in the eye of the beholder anyhow and should be much more than skin deep. Personal style is more important (and fun!) than geometric perfection. At least I’m not worried about aging. As long as I have my general health, a few sags, bags, wrinkles and gray hairs are no big deal.

10. Speaking of age, I know I’m getting older because I don’t recognise a lot of the pop-culture references any more. And I don’t care. The reason could be that I don’t watch so-called “reality” TV, listen to popular music or read the bestseller books. I don’t live in the past either, but I choose my own path through the overwhelming media assault. It seems to be a path that is less-traveled – but I’m happy there. I surely could tell you the names of some recent popular knitting patterns!

Whew! That was hard! Now the even-harder part, websites to nominate. Along with hers, Piggy has already nominated 3 of my would-be choices. Maybe I’ll go with some that aren’t personal acquaintances but whose blogs I enjoy:

1. Ev of Strings ‘n Things. She also has a great podcast! Give it a listen.

2. Marilyn of Waterbourne – A Live-Aboard Blog. The skipper of Victoria’s FibreFest and documenter of ships and boats of all types.

3. Leslie of Devon Fine Fibres. I’ve mentioned her before but she so impresses me.

5. Trapunto of The Straight of the Goods. Weaving and life.

6. Cynthia of Living and Dyeing Under the Big Sky. More gorgeous fibre arts.

8. Leena of Riihivilla, Dyeing with Natural Dyes. (Scroll down each post for the English version.) Amazing dye colours from Finland.

10. And Sheepish Annie, just for making me laugh. Although I believe in being ready for the Zombie Apocalypse too. Are you?

It was hard to pick from the gajillion blogs I try to keep up with. And I didn’t want them to be the hugely popular ones but some a little more off the beaten track or ones you just might not have considered. Most of these folks are busy and likely won’t be interested in playing along so I won’t bother most of them to let them know they’ve been nominated. You can if you like. Or just leave them a comment if you enjoy their blog. After all that’s what this meme is all about, right? 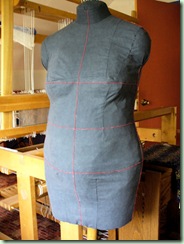 Look! She’s gray and wrinkly just like me! I don’t have those red lines though. Heh. We are already getting to be very good friends. I’ve used Deb to re-cut the Celestine dress pattern to hopefully fit me. It certainly wouldn’t have fit at all if I just went with my bust size. I went up a whole 4 sizes from the bust to the waist and hip, from a 42 to a 48 - which had to be extrapolated since the pattern sizing only goes up to 46. Yikes! Obviously women are expected to be more hourglass-shaped than pear-shaped, huh?

It might be a bit big now (since Deb is slightly larger than me) but at least I have some extra fabric to take in. Better than being caught short, right? I also brought the bust point down (gravity works!) and narrowed the front inset in order to accommodate it. Then I used the Sewing Muse website to track down some helpful fitting articles in my Threads magazines. Shoulders and sleeve cap needed some work to narrow them. This is a great site for a searchable up-to-date index for every issue of Threads right back to the beginning. Very handy. Yes, of course I have every issue from 1985 to the present. Why do you ask? It used to have knitting and weaving and all sorts of other crafts too besides just sewing.

So now that the pattern is ready to go, I don’t have any fabric that I want to use. I won’t be cutting up any of the good stuff because I want to make it out of something relatively inexpensive, just in case I’ve created a “wadder”. I’m aiming for a (hopefully) wearable muslin. I also need a matching zipper, preferably invisible. I haven’t sewn in one of those in donkey’s years! Don’t even have a proper foot for them anymore. Here’s a great tutorial on this type of zipper installation.

My first sewing pattern order finally showed up just now. Another is still to come. More later. Yes, I’m definitely on a sewing kick. Knitting? Nearly finished the Multi-Multnomah. Only 7 (or maybe 3) rows to go then the bind-off. It all depends on how much yarn I have left. Hope I don’t have to rip back if I miscalculate.