I went and left you hanging at about the 1/3 point in our vacation, didn’t I? Sorry about that. I’ve been caught up in getting back to what passes for normal around here. Nearly 6 hours in the garden didn’t get me very far and there’s lots more to do still when the weather clears up. Had a lovely time with my Spectrum Study Group where we planned the next few months worth of meetings and I finished a Super-Secret Project or two. So, back to south-central Oregon and heading towards Crater Lake.

The weather remained dreary as we headed south and a little west toward the “back door” to Crater Lake. The roads we travelled are closed in winter and spring which could be very soon in these parts. They apparently get ridiculous amounts of snow and only plough the main road up to the rim. After that you’re on skis or snowshoes until summer! Luckily for us it only snowed a tiny bit but T-Man had to drive very carefully along the rim road with sheer drop-offs often on both sides. There was no lake! Just a humungous bowl-full of fog.

After driving nearly halfway around the rim we had to drive down the twisty mountain road to the campground where we were lucky to get one of the last electrical sites. It was hailing on us by then and we were very glad for our little heater. I still thought the lake was just a myth! The next morning broke sunny and a whole lot warmer so we drove back up and spent all day going all the way around the rim road with a few extra side trips. There really was a lake there: 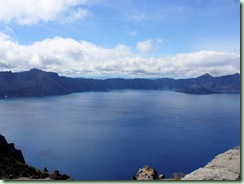 It was formed when 12,000 ft. Mt. Mazama blew up 7,700 years ago with a force many times that of Mt. St. Helens, leaving a crater that eventually filled up with water. It has the most gorgeous colours in every shade of indigo due to its clarity. There’s only one trail down to the water: 1.1 miles of steep zigzag where you can get a boat tour of the lake. We were proud that we did the hike just so we could say we touched the water! I think this much-too-friendly guy was trying to help T take his photos: 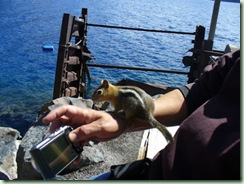 Golden-mantled ground squirrels look a lot like big chipmunks and obviously somebody has been feeding this cheeky one against park rules. Crater Lake is something like 6,000 ft. above our usual sea level so we were pretty happy when we finally made the arduous trek back up to the rim: 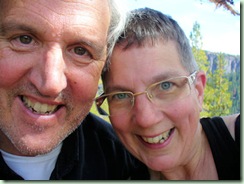 Amazingly there were an awful lot of folks heading down the trail who looked like it was going to be a difficult hike back for them. They do warn you that you should be reasonably fit but they also have a defibrillator in the storage locker at the bottom! And a washroom as well as an emergency phone. People always think they are in much better shape than they really are. Even we spent a lot of time resting while huffing and puffing before we made it. All hot and sweaty but pretty pleased with ourselves.

There are several underwater volcanic cones in the lake but this one: 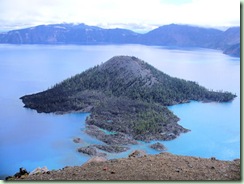 Wizard Island is the biggest and unlike the rest, is above the surface. There’s one more island: 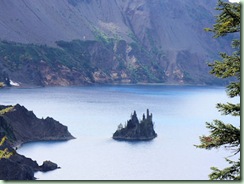 called the Phantom Ship that is the remains of an even older volcano than the caldera it’s sitting in. We also took a side trip from the rim road and visited the Pinnacles: 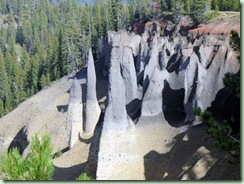 These fantastic rock formations were situated along a deep river canyon and are the remains of fossilised fumaroles, hollow volcanic heat vents, that were uncovered by the scouring action of the river. Really cool-looking, huh?

So after the Grand Crater Lake Tour we left the next morning for another of Oregon’s famous geological features: the Oregon Caves. You hang a left at a little town called Cave Junction and drive a narrow twisty road through the farms and up into the mountains. The little campground we stayed at was empty apart from one more camper who came in after dark. Before then though we drove up the rest of the twisty steep road to the cave entrance. We found a cute little chateau there as well as the welcome centre, all sided in cedar bark. Luckily we were just in time to join the next tour of the caves so we jumped right in. It’s a 90-minute half-mile hike with over 500 stairs inside the marble caves: 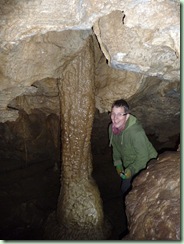 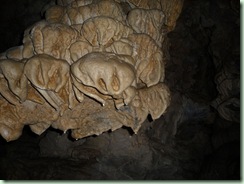 I didn’t get any great photos really so I borrowed these ones from T. I’m really impressed with myself – that’s the second tour we’ve been in (including Lewis & Clark Caverns last year) and I haven’t had even a twinge of my underground-phobia. Maybe it’s the fact that it’s all tamed by tunnels and stairs and there’s a guide who keeps you hopping and entertained. We also saw a cute little cave bat hanging from the ceiling. I love bats. No pics because we didn’t want to disturb it anymore than we already had.

After our adventures in the caves and with a whole new vocabulary (stalactites, stalagmites, columns, flows, curtains and moon milk – oh my!) we had to get over to the coast. However there is no direct route except through the corner of northern California. This took us back to Cave Junction, down through the redwoods, bypassed Crescent City and back up to the Oregon Coast for Day 11.

What we did and where we went from there is unfortunately going to have to wait for the next instalment! This is getting pretty long again. We have our Thanksgiving Dinner tomorrow night at T-Man’s brother’s with a large contingent of family – minus The Ninja who left yesterday for Japan and classes with the ninjutsu masters. More anon.