We’ve been having lots of rain for the last few days. It feels odd after last week’s warm sunshine and definitely inching more towards winter. The gorgeous leaves are sadly beginning to fall in earnest. At least I managed to get more than half of the garden sorted before the rains came. I’m actually enjoying the break and my neck, wrists and particularly my right hip are thanking me. But I so want to finish the job! I was even dreaming of pulling weeds the other night as the rain rattled on the gutters.

My weld (luckily harvested before the rain set in) is drying on my basement dye studio table. Before I cut it down the flowers were pretty much finished but only a few partial stems had gone all the way to brown dried seeds. I gave myself a blister trying to cut up the pieces with blunt pruning shears. So I switched to the kitchen scissors and it worked much better, especially after eliminating the thickest stems since I doubt they have much colour in them anyhow. I thought the plant matter might manage to dry easier if it was in smaller bits. Interestingly, no colour leached off on my hands and I suspect this dyestuff needs heat (and apparently alkaline) to give up its yellow. Not at all like the coreopsis which I picked with nitrile gloves this time so as not to stain my fingers until they looked like an old smoker’s. I saved lots of dye seeds to replant: weld, coreopsis and my locally famous monster variety of marigold (not monster as in flowers but the plants are often over half a metre tall and get commented on by all the neighbours). I also get all these as volunteers but I’d rather have a little more control over where and when they turn up. So they get started in spring in the “grow-op” like all my other annuals and veggies.

I still need to deal with the poor pathetic madder plants. I’ve decided that they finally after all these years need a chance in the garden instead of the big galvanised buckets they’ve been lurking in. It’ll be harder to keep control over them but perhaps I’ll get more large madder roots if they have more space to run. I do have to be careful about getting scratched though – my skin comes up in rather nasty welts from these surprisingly bristly sprawlers. The dye garden will have to get a a bit of a makeover to find space but I was pretty happy with the colour harvest I got from it this first year.

So. Let’s have some knitting shall we? I’ve finally given the finished baby things to Milady Daughter though I cheated a little and gave them to her the day before the baby shower Saturday. The party itself was lots of fun: about equal parts family and friends (mostly SCAers) which made for an interesting mix. And I got to hold my new little grand-niece who was only a week-and-a-half old. So cute with her little white rose headband and purple dress! Of course I managed to forget my camera. Doh. Her second cousin, my impending grandbaby, got a huge haul of lovely gifts with the main colour also purple (the theme was “anything but pink”) with a side-salad of green and a splash of blue. Nana and Alien’s Other Grandma both gave her handmade quilts with pink in them though and of course there was no complaint! Less than a month to go now. Mom-to-be is doing really well even though it’s Beached Whale time. She’s on her last week of work before starting maternity leave. Things are getting exciting!

The first of the FO’s are a set: 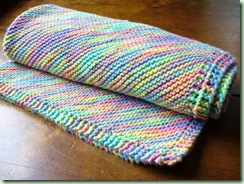 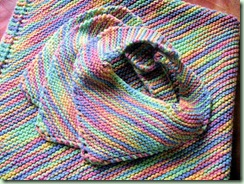 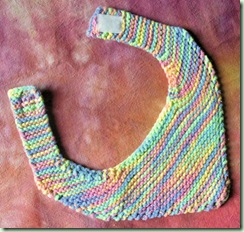 Comments:  I managed to get the blanket knit before my hands got so bad over the summer. The bibs had to wait to start until we were on our vacation at the end of September. While we were driving long distances I somehow managed to screw up the pattern several times and had to go down a needle size from the blanket, both to make the bibs small enough and to actually get 3 of them out of the blanket’s leftovers. I ended up Frankenstein-ing the third and last bib out of small lengths to complete it. The yarn was difficult to join invisibly – I used stitched joins (like a half-Russian join) in the blanket but simply tied knots at the selvedges on the bibs and then reinforced every join on both blanket and bibs with fray-check. Not too much though because I was afraid it would be stiff. After I machine washed and dried everything I clipped the tails of the knots closely and they seem to be holding ok. I finished the bibs with a small piece of Velcro for the fastener, machine-stitched in place. She’s going to have to remember to close the Velcro when laundering or the hook end will stick to everything!

I have an even nicer baby gift but it’ll wait until next post.