More computer tech stuff coming up. Those who prefer crafty stuff can skip down to the FO now.

I was interested in how our little 2-person household stacked up with the rest of the computer-verse gadget-wise. So I checked the stats (as of last month): more than 88% use Windows and of those more than half are still with good old XP. Less than 7% use MacOS and a mere 1% are running Linux. The popularity of iPads and smart phones, especially the iPhone is growing fast though. And I’ve noticed that most new computers advertised are laptops, not desk-sized versions. Portable is taking over. Fascinating – to me at least.

As you might know, we’ve been using computers around Damselfly’s Pond since the early 1980’s. Ah, the joys of the Commodore 64 with no hard drive, just big old floppy disks and a whole 64k of memory! Currently we each have two actual computers: two big desktops, a netbook and T-Man’s new baby, a Macbook Air. Plus his iTouch, iPod and my now-ancient and feeble Palm T/X (which even in it’s current has-been state still has considerably more brainpower and function than that first C64). I think there’s a mostly-dead vintage MacBook kicking around here somewhere too. I bet that’s nothing compared to some households! We don’t even have a flatscreen TV. Or Blu-Ray. By the time we get around to it, there will be new technology available I’m sure.

One thing I’m currently coveting is my own iTouch. We have enough credit card points to get the model I want and T has just ordered it for me. This is how we got his and he loves it – but the new ones are even better. Cameras, voice recording, video recording, useful apps – light-years ahead of my poor old expiring Palm. (No, I don’t want an iPhone.) Now I just have to wait until it comes. No instant gratification here. So what do I expect for a freebee?

Geek babble over. You can come back now. 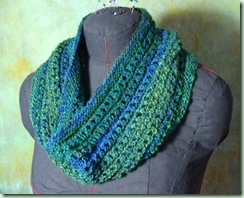 Pattern: my own design.

Comments: Since I won this skein of yarn in a draw, I decided that it needed to be knit up into something nice. I never did measure how many yards I had and there is some little bit left that I’m not quite sure what to do with! This is a simple cowl using the eyelet pattern from the recent girl’s cardi I made. It can also serve as a prototype for the requested one I’ve just started to knit out of the cardi leftovers. I quite like the shape as it can be worn in several different ways and doesn’t come undone or fall off. Now I know why I’ve seen so many of this type of neck warmer being worn around town!

I'm saving up my airmiles points for an itouch too! Thanks for the cowl pattern, I need to make one asap for myself. It's getting chilly and damp out there. :)

You're welcome to the pattern, Cyndi! Let me know how it turns out.