Break out the poppies! Yes, it’s Remembrance Day here in Canada. Lots of folks get the day off but poor T-Man doesn’t. Both our dads were in WWII, mine in the Canadian Army infantry serving in Italy and T’s (much younger than my dad) in the Navy but late enough to have missed most of it. My brother The Sergeant-Major was in the Canadian Armed Forces Reserve until he retired and served as a peacekeeper in Egypt. So we get the full meaning of the day even if we don’t gather at the cenotaph or raise a glass at the Legion Hall. I’m especially grateful that my husband, son and son-in-law never had to serve in a war and hope the same for my little grandson. (And so as not to be sexist about it, the girls too. Even if one isn’t fighting the front lines, war affects everyone.) I was reminded of the hour when I heard a vintage plane go over at 11am but couldn’t see it for the low cloud and drizzle.

Because it’s so much more dreary out today, I’m glad I got out for some Adventures In Public Transit yesterday when we had a gorgeous sunny fall day instead of rain. I headed downtown and went first to check out the clothing options in Sears just because I so rarely get there. Meh. Too much polyester and absolutely everything seems to be made in China. Badly too. There were a couple of cute items but the only things that really interested me were either in an uncomfortable fabric, didn’t fit me or were too far beyond what I’m willing to pay for a Name Brand (which apart from my expensive taste in shoes and boots is admittedly a rather low number). On to Dressew.

I got lost in the elaborate underground maze on the way through Pacific Centre Mall. It’s changed some in recent years and I haven’t been there for ages. I finally bumped into the Skytrain station (otherwise known as SewerRat at this point) and since my transit pass was still good decided to take it to Waterfront Station. Probably could have walked it faster but oh well. Emerged into the light in Gastown and walked around a little playing tourist. The area is “gentrifying” considerably and I for one think it’s a good thing. The opening of the Woodwards complex hasn’t hurt. Lots more people around who didn’t look like they wanted to panhandle you and stylish new businesses opening up. Personally I’m not at all afraid of the sleazier areas, at least in broad daylight, but I hope it attracts some of the more timid folks to explore now.

Dressew still had some of its infamous cheap yarn available so I restocked my supply of Kaffe Fassett sock yarn. Been using it up on baby things lately and I just love the colour combinations. I did a goodly perusal of both floors and ended up with a few small notions and these fabrics: 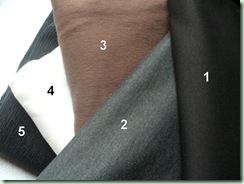 I seem to have been in a neutrals mood. They’ve all been warm washed and machine dried and came out with flying colours. Number 1 is a black double-knit in nylon, rayon & lycra – I think. I didn’t write it down and most of the tagging in this store is suspect anyhow! It has a nice weight and drape and lots of stretch and I hope to make some pull-on pants and a funky skirt and maybe even another simpler one out of it.

Number 2 is a heavy flecked gray double-knit with less stretch and a lot less drape than Number 1. I’m not sure of the fibre content but I think there’s some polyester in it. I think it will make a great dress. Like this one: 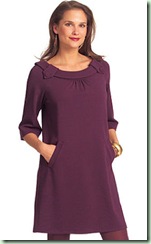 Butterick 5244 view B, circa 2008 and apparently now out-of-print. I’ll have to be careful that the neckline isn’t too wide or it’ll fall off my non-existent shoulders though. I can wear it with a top underneath for more warmth this winter.

Fabric Number 3 is a medium-weight brown sueded cotton/lycra jersey. The edges curled under a lot when I washed and dried it so it will be gangs o’fun to cut out. I want to make this vintage number: 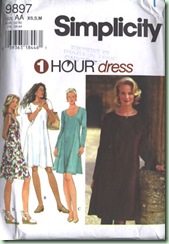 Simplicity 9897 from 1996, probably view B with short-sleeves this time. I made view A, the long-sleeved high-neck version, years ago in a cheap and pilly polyester knit with an almost terry-cloth texture to it. Since I’ve lost a little of the old midsection bulge, I wear it more often than I ought to since it’s totally shredded and makes me sweaty and stinky. It is indeed very quick and easy to make with no facings or zipper. I just might begin with this one to get my sewing mojo jumpstarted.

Number 4 is a cream-coloured very lightweight stretch knit (can’t remember what fibres!) which is going to become some very light and soft underdrawers. This is part of my ongoing project to find something that is more comfortable for me than regular ladies’ panties. Something that doesn’t cut in to my delicate areas, doesn’t roll up and doesn’t slip down. A tall order methinks. This stuff only cost me $12 for 3 metres so I’ve got lots of room to experiment for less than the cost of a single pair of these: 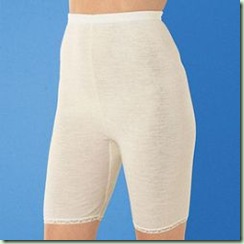 I’ll just modify this well-aged pattern from the stash: 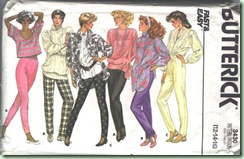 Butterick 3430 from 1985. This should be a lesson to you – never throw out a pattern because it just may come back into style 26 years later. Hmmm…I just recalled that I actually made a pair of matching tights from this pattern for that Simplicity dress! They wore out in the thigh area rather quickly due to chub-rub. Sometimes cheap fabrics are not a bargain.

Lastly we have fabric Number 5. I was not shopping for this one. (Actually I wasn’t really shopping for fabrics at all!) I have no idea what I will make out of it. It was also the first piece I got them to cut for me so that says something. It’s a black lightweight rayon/lycra scrunched crepe something – maybe a voile? I just looked more closely and I’m now pretty sure it’s woven rather than knit but hard to tell the weave structure. It has a deep super-stretchy texture and is quite soft but with a certain amount of body. All I know is that it will be some kind of long tunic top and that I love it. $4 a metre in the bargain basement bin. Not exactly winter fabric though so it goes on the back burner.

Yes, I know I started a sewing binge last spring and never got very far with it. Apart from my lovely Debbie Double and a bunch of new patterns anyhow. Plus right now I have a partially cut out quilt for my bed that is Priority Number ONE. (And seems to be taking forever to do – for a quick quilting technique. Must be the 256 x 3 layers squares, huh?) But lest we forget, this is what my hands looked like a short 3 months and 2 weeks ago: 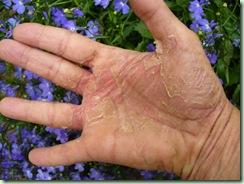 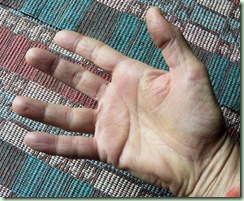 Absolute perfection. See why I might be able to get a little more delicate work accomplished these days? I’m officially off any meds at all and am currently just using my own homemade moisturiser. Whew. Better stay this way. Just sayin’.

The difference in your hands is amazing! What's in your homemade moisturizer? I have a co-worker who's having problems with her hands, not as bad as your were, but bad enough that I've made balms and lotions for her.

I'm pretty sure it wasn't my homemade cream since I barely used it until recently. I think that I was already healing on my own and the Protopic prescription ointment cleared up the last of it. I've used a gazillion different things so it's kind of hard to say which one was most effective! I'm willing to share the cream recipe but it's really long and complicated and needs pricey specialty ingredients and dedicated equipment to make it. Plus I think the commonly available Cetaphil products (the moisturizer and especially the barrier cream) and good old shea butter might be just as effective.