I finally got around to harvesting the rest of the woad crop. I didn’t really have anything I wanted to dye right away so I took it to the extraction stage and got a lovely dark blue. There wasn’t much colour in the froth on the top but there was sure a lot of frothy foam! I left it to settle out for an hour or so and it was still sitting there undiminished so I took a spoon and scooped it out into a small pail. Now that it was clear I poured the rest into three 2-quart canning jars plus a 1-quart jar. It didn’t quite reach the top of the smaller jar so I just topped it up with a little plain water. I even remembered to label the jars! 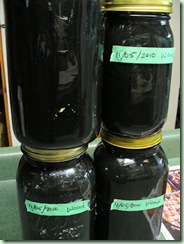 No idea what the pH is or whether this will keep very long but so far so good! To use it all I have to do is dump it in the dyepot add a wee bit more soda ash (to counteract any fermentation), warm it up to 50C and reduce it with thiox. This is the first time I’ve tried to save the woad for later use so we’ll see how it goes. It would have just been composted anyhow so nothing ventured nothing gained.

While I was waiting for the woad leaves to cool I used the time to snip up the meagre handful of 2-year-old madder roots I managed to get from my big galvanised pots. It’s easiest to cut when it’s still fresh – later on it’s like sawing lumber. I decided that since I have more garden space now dedicated to dye plants it can go in the actual ground. Besides it hasn’t done very well over the last couple of years so I thought it could use a change of soil. I added some lime and bone meal to help perk it up and it will get compost in the spring with the rest of the garden. So now there are 6 hopefully healthy roots in the corner where they can go as crazy as they like. And a weensy pile of madder root drying in my basement, maybe enough for a small skein or two: 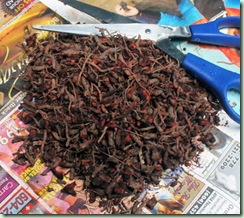 I love the smell of madder root. It’s kind of earthy and quite distinct. Better than woad anyhow! Smells even better when it’s cooking but I’ll save that for another time.

Today is a lovely and mostly-sunny fall day but I’ve got a nasty migraine. The light is too bright! I’m knitting on Princess Pink’s Not-Pink Cardi instead. Nearly done but don’t know if it will be blocked in time to give it to her tomorrow afternoon.