It’s my birthday today and it’s the big Six-Oh. I’m trying to decide how I feel about that. I breezed through 30, 40, 50 with barely an eye-blink but for some reason I’m feeling more…contemplative? Perhaps a smidge more concerned about the speed of the passing years and the ever-diminishing time remaining to me. In earlier eras I would be considered an old woman but I don’t feel old – at least most of the time. I feel fit and strong and productive. I’m happy with my life (Horrible Summer of the Itchy-Peelies aside) and wouldn’t really change anything that I have any influence over. There’s a few things I’ve learned over the years: don’t sweat the small stuff, don’t try to fix anybody else (just me), and don’t be afraid of change because it happens anyhow. So maybe it’s going to be OK, this Seventh Decade in The Life of Damselfly. Bring it on!

I’ve been working on yet another secret project which can’t be blogged about. Yeah, that’s what? Number Five in the last few months? This one is not for a baby or a grandkid but is for my local Ravelry group’s Festivus exchange. I have just over a month to finish up a gift package for my Swappee. Unfortunately I won’t be able to post about it until the middle of December. Sigh.

The sweater for Princess Pink is coming along. I’ve nearly completed the second sleeve but of course I haven’t even started the body yet. Worsted yarn knits up a lot faster than my usual lace and sock yarns though. Easy-peasy. I’m aiming to finish by next Monday when I’ve been invited to My Son The Ninja’s house for a belated birthday dinner.

I also found a sweater that I want to make for me out of the Berroco Remix yarn that I originally bought for the PP sweater. More on that later. It’s an interesting yarn: 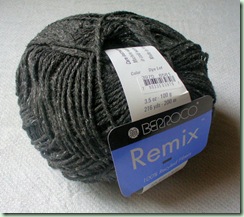 100% recycled fibres in a tweedy blend of 30% Nylon, 27% Cotton, 24% Acrylic, 10% Silk, and 9% Linen. Whew! It was the nylon that stopped me from using it for PP because we’re now pretty sure she’s allergic to it. Not a good choice of yarn with 30% nylon, even more than sock yarn contains. Oddly enough, my son-in-law also is sensitive to nylon. I didn’t know that was such a common problem. Not for me though. So I get a sweater for me out of the mistake. Heh.

Meanwhile it’s a sunny day with a little fog. Kind of like my life…

Bonne Fête Louisa! wishing you a very healthy year.
The six O is looming for me too( next year) and I catch myself sometimes thinking if I will be able to go through the stash before I go...must knit more-must knit more.

Happy Birthday! I am not that far behind you. Remember, its "just a number" and "olde" is a 4 letter word! Enjoy this beautiful, sunny day!

Happy Birthday for yesterday! At least the weather wasn't too ghastly.

Sorry I missed your birthday. Glad to hear you had a wonderful day (and dinner!)