No, not the ones that my buddies the cupboard spiders make. I was shocked the other day when my big desktop computer, Damselfly (yes, she’s named after me), suddenly spit up a warning that she was nearly full. Only 2 GB left of free hard drive space. Yikes! How did that happen?

Well for starters, my desktop HP Pavilion is pretty vintage in computer years. There’s lots of junk and really ancient files collected up. You always think you’ll need them later but no, you only need that one you deleted. Not the one you carefully saved. It’s a corollary of Murphy’s Law, I think. Then there’s the rude updates that don’t get rid of the old files automatically. It’s dangerous to do that kind of thing yourself manually. Who knows what obscure file will be needed to run something vital? I’m not a programmer or a hacker. Just a long-time user who knows the hard way what Bad Things can happen when you uninstall or delete the wrong files. It ain’t pretty. However, those who are programmers should be more tidy. Just sayin’.

So I foolishly bravely uninstalled programs I never used, deleted old files – 3-year-old guild newsletters, birthday cards, out-of-date backup files and (most helpful of all) old podcasts. Ones I’ve already listened to or would never get to. That alone freed about a quarter of my 250GB. Yeah, I know that’s pretty small by today’s terabytes of space but I did mention this is an older computer. She was nearly top-of-the-line when I bought her. Really! I still have a little more cleaning up to do but I don’t think she’ll spit up again anytime soon. I hope. I don’t even use this computer all that much because I have to actually sit in a chair in front of it. Not in my comfy warm bed with blankies. Like I am right this second with my netbook, Bluet. Too comfortable by half.

If I can pry myself out of here, I need to go clear off some space on the portable hard drive and do some back-ups. That poor thing is just as wimpy as the computer it’s supposed to be backing up. Amazing to think that my first computer, the Commodore 64, only had 64k (yes, kilobytes)of memory and No Hard Drive. Only a floppy drive where you had to swap out discs to run a program or save a file. Ah, progress! There’s so much more computing power in my little iTouch, Ruby, that it’s not even funny. That’s how far we’ve come since the early 1980’s. That’s millennia in Computer Years.

So what else? Oh yeah. I promised to show off my Festivus prezzies from dear wenchlette: 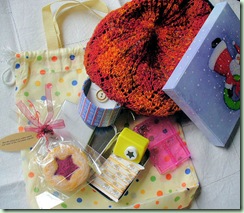 That’s a felt cookie decoration, some ribbon with bees on it in a useful-sized tin, a star punch, some really nice buttons (need to make something to put them on) in a little round decoration box, a stitch marker case with red stitch markers, a business card case and – the main feature – a slouchy tam in Ysolda’s Ishbel pattern in (gasp!) Wollmeise! My very own Wollmeise and in my colours too: 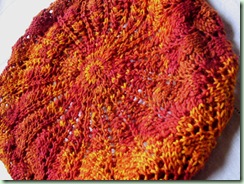 I did have to put a little elastic cord in the band just to snug it up a little. It was slipping down over my ears! The curse of a small head and no hair to hold it up. It was really easy to do though and now it is perfect. And it goes perfectly with my bamboo Ishbel scarf. Everything was all packed in that handy polkadot drawstring bag that will be perfect to carry spinning fibre in. It’s slippery so the fibres won’t stick and densely woven so a spindle won’t pierce it. Thanks so much, wenchlette! She says she forgot to put something in but I can’t imagine what that might be. Guess I’ll find out when I see her next.

Now what else is new? The Really Long Cuffs are done on my latest pair of knee socks: 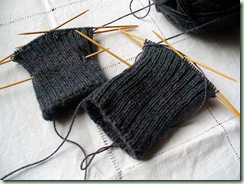 Now I’m carrying on down the leg. The yarn is actually a dark greyed midnight blue with very muted purple and navy bits. Hard to tell without good light because at first glance it just looks charcoal grey. It’s Trekking XXL which I quite like though it tends to get a little fuzzy with wear and washing. I’m calling these socks “Dark o’the Moon”.

Oh, and there’s also this: 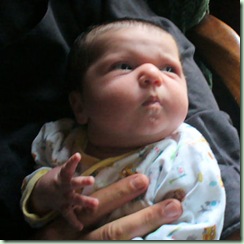 The Gratuitous Cute Baby Picture! My little Rosebud there in her Grampa’s hands is nearly 2 weeks old already. She now has on her first cast to fix her curly left foot – the first on a long road towards making it as normal as possible. It’s kind of like getting your teeth straightened with braces and retainers and all. More trouble for her poor parents than for her though. She is such a good baby. And so adorable too. That nose is definitely her mommy’s and the rosebud mouth comes from her daddy. The horizontal dent above her chin is mine!