We were thinking about going to get our groceries with the car today and stocking up for the Big Dinner. I need to get some things done ahead of time if we plan to have 20+ people here! However, we ended up lounging around and deciding that it was way too busy at the supermarket today to bother. We’ll go after work sometime during the week. Right.

Moving right along. I finished a project! 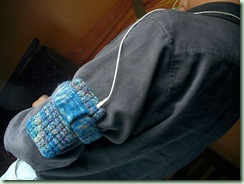 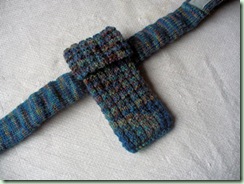 Modifications & Comments: Used smaller needles than called for. Made a fold-over flap with an eyelet hole for the earphone cord and a belt-loop. Also made a strap to velcro to his arm as per his request. Turns out it works better with the cosy facing his arm to keep it from joggling around.

Flap: CO 22 & work waffle patt flat for 1.5” (5 patt rep). Made a double-yo eyelet near the end during the next rep (in line with the hole for the earphone jack). This flap gets stitched down to the sides later.

Body: CO 20 more sts at end of round using knit-on CO and began knitting in the round for one rep of waffle pattern.

Belt Loop: With separate strand of yarn, centre the flap of 15 sts on back of body by picking up strand between sts and k in back of it as I knit the row, then separated sts onto 2 ndls. K flap separately in st st for 1.5”. Cont k body in patt until it’s the same length as the flap. Join loop flap onto body by k2tog from both ndls. (Note: could have made full width of cosy back. Also could have edged in garter to eliminate curl. OK as is though.)

Cont in waffle patt until long enough (4.5”) to fit iTouch (stretches!). End with 3-needle BO as for orig patt inst.

Strap: CO 10 st and k plain in the round 16.5”. Inserted 1” non-roll elastic (15” - long enough to go around upper arm with a generous overlap) into tube, sewed ends of knitting closed. Machine-stitched 2.75” velcro strips to ends to fasten.

In other crafty news, local Ravelry group had a fabulous and fun Festivus party last night at the Yaletown Brew Pub. I even managed to stay awake without tea! As you might expect, it included a gift exchange, handmade of course. My Giftee was someone I hadn’t met before so I spent some time stalking her Ravelry page and noting her answers to the obligatory questionnaire of likes and dislikes. I’m pretty sure she liked her package! 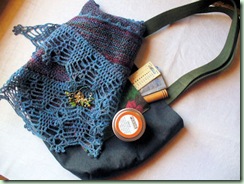 You’ve already seen the shawlette here (scroll down). Sneaksy, aren’t I? The package included some actual Festivus tea from the Pekoe Tea Lounge, a needle sizer, some packets of Eucalan wool wash, a needle case made by T-Man:

and a set of stitch markers made by me: 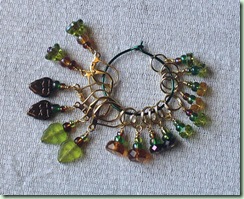 They include 3 sets of moveable stitch markers that can also be used for crochet and a set of jump-ring style markers with 2 slightly larger ones, handy to differentiate start of round or whatever. These were all packaged up in a custom-sewn tote bag: 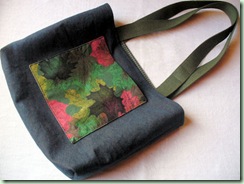 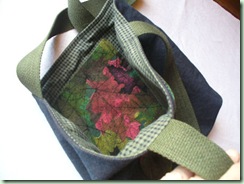 There’s a pocket on the inside and one on the outside. The fabrics are black denim, green gingham and a leafy print plus heavy cotton tape handles all from the stash. The pattern was a free one called Pink October Tote from mamaspocketbook.com. Not that I really needed a pattern since this was so simple to make but I liked the small size and proportions. Once I located the ingredients it only took an hour or two to make. Now I want another one – with mods of course (more pockets! closures!) – for me.

In exchange I got a very nice package of goodies from my Giftor. I’ll have to have a photo session when it’s light enough to show you what I got.