As the sun was shining in my skylight beside me yesterday afternoon, I worked hard on my sewing machine and got 9 of the 13 rows of my quilt sewn together. I’ve never made a “rag” quilt before and it’s both easier and harder than a regular one. Each piece is made into a mini-quilt sandwich and you sew them together with a wide seam wrong-sides-together. These exposed seams then get snipped at 1/4” intervals so they will fluff and fray and become a 3D design element on the quilt top. The back side is flat and plain. I’ll show a photo (or several) when I’m done.

I finally got smart and set up two small folding tables on either side of my sewing machine chair. The one on my right has the pin box and the next pile of squares to be sewn together and the table on my left helps support the weight of the growing quilt. I found that taking out the pins that were holding the squares together before beginning to sew makes it a lot easier and quicker since I don’t have to stop so often. I can do each short seam in one pass but when sewing a complete strip onto the quilt I have to stop often to align the next section and make sure the seam allowances are opened properly. I’ve been matching the seams and sewing as straight as possible between them and it’s going fairly neatly. The heavier thread is perfect but I’ve managed to break a couple of needles so far on the super-thick seams.

Before it goes in the washing machine and dryer to fray the seam allowances the quilt will be about 91” x 105”. It might contract a little afterwards but because all the sheets it was made from are vintage and have been washed many many times, it shouldn’t shrink much at all. The reason the quilt is so large  is because my bed is made so that the covers absolutely need to tuck in properly. It’s only a standard double bed but anything short of queen size isn’t large enough and wider is better still. The finished Watercolour Rag Quilt will have the longest dimension across the bed so it tucks in right under the mattress. Most important!

Switching gears as I am wont to do, word has it that baby Rosebud is none too happy in her boots and bar. She’s been fussing up a storm and everyone is hoping that she will get used to it Very Soon. Or at least that we can find the right combination of socks and lacings to make her more comfortable. Because there is absolutely no option but to wear the darn things! She will get it checked out again next Wednesday but meanwhile her poor mom is going a little nuts. My job is going to be to modify her sleepers with feet into footless ones. Happily most of the ones we got her last time were already suitable. I was hoping that the ones with feet wouldn’t be a problem but apparently the seams are too thick and dig into her skin. Sheesh. What a princess.

I’m sure there’s a bunch more but that’s all that I had staring me in the face for now. Should keep you occupied for awhile anyhow. <smirk>

Yes, I know I have more FOs to post. Coming soon. Meanwhile how about these photos that I took while walking over the Cambie Bridge on Saturday using Ruby, my iTouch, and the way-cool Hipstamatic app: 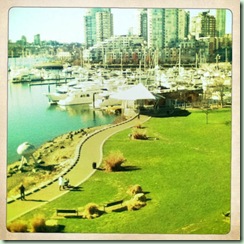 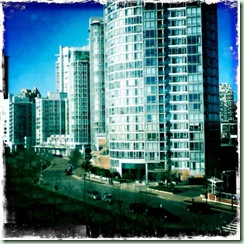 Hipstamatic magically makes everything and anything look fantastically artsy, doesn’t it? (T-Man is envious because he has an older iTouch with No Camera. Awww…) Well I’m off to finish sewing my quilt now. Then the clipping is going to take several sessions if I’m going to do it without damaging my hands. How do you eat an elephant? One bite at a time…