My! The posts around here are getting rather few and far between, aren’t they? Sorry about that. I don’t know whether it’s because I’m busy (not that I feel any more busy than usual) or because I just don’t take the time to write. It’s definitely not like I don’t have anything to say! That would just be…totally strange.

So what have I been up to? Family stuff, walks, indoor gardening (transplanting little seedlings), housework, cooking, knitting, reading, knitting while reading – the usual. There’s still stuff I should be doing but haven’t! Somehow it seems to take more time and energy to document my activities than it does actual doing them. Why is that? I don’t regret any of my project documentation though because you never know when it’ll come in handy. Such as with the slippers I’m currently making for Milady Daughter. I just used the same parameters that I used for her daddy’s pair, only slightly shorter. And the same novelty edging idea as in my own pair. I’m nearly done. These are very quick to knit, being like socks only on less stitches than baby-size – just using doubled worsted yarn and on huge needles. I’ll wait to full/felt them until Monday when Rosebud has her next appointment for a cast change. MD can try them on as they get closer to the correct size. That way they will fit perfectly.

I was going to have her make the felt for the innersoles too but I found that T-Man and I had made enough for 2 pairs last time. I just have to trim the toes slightly so we can use the second pair for these slippers. Contrary to my worry, there’s been no need to replace the innersoles on slippers. The outer soles wear out long before the inner ones do! She’ll probably be disappointed however. Felting is fun! Hard work though when you do it by hand.

I’d be absolutely finished my Remix Vest now except for the fact that I need a 24” separating zipper for it. The rather changeable weather has not been inspiring me to go to Dressew lately so it’s on hold for the moment. All washed, blocked and ready to sew the zip in when I finally get it. I’m also nearly done yet another pair of socks for Rosebud from some more leftovers I found in the stash. I probably need to find another project to take with me tomorrow for weavers’ guild knitting though because I’ll likely finish these today. I’ve been ploughing through the projects pretty quickly since New Years! Probably because I have so many things I want to make. My Ravelry Queue is forever being crashed by my changing priorities! Oh well. It’s just a suggestion and a way to avoid forgetting things entirely. Needs and desires change.

What else? Oh yeah. I’ve been playing (like so many other owners of iTouches and iPhones) with the Hipstamatic app. It’s so fun! It’s like having an old-fashioned camera (without all the hassle of getting prints made before you can see what you’ve got) and it makes even mundane shots look amazing. Here’s some of my first efforts: 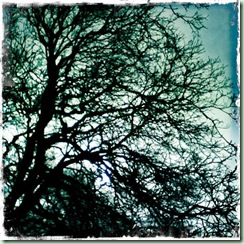 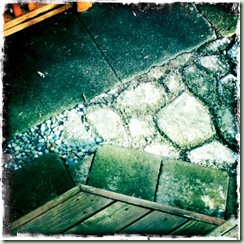 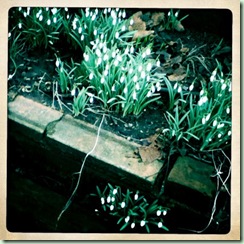 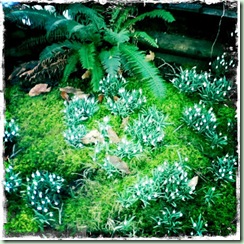 Super-cool, huh? Love the square format. I’m actually old enough to remember when some photographs came like this! Mostly black and white too. Now I want some more different lenses and film. You can get them (for $.99) right from the app.