It took nearly a week but I finally finished the first garment from the Butterick 5244 pattern and it turned out really well! Here’s Debbie modelling for me:

It’s somewhat darker and more olive green than this in real life. I brightened it so you can see the details. Especially the cute pockets which I made up myself! I didn’t want this tunic to look too much like the second dress version, which is cut out but not sewn yet. This tunic can be worn with a t-shirt and pants underneath or on its own with leggings or tights. I really like it and nearly all the tweaking I did to the pattern worked out perfectly. The only mod that didn’t work is where I split the fullness from the FBA in half, part going to the gathers at the yoke and the other inch eased into the side-seam. The latter was a Bad Idea. It just made a poochy area under my arm so I picked out the stitching and reduced it to 1/2” of ease and chopped off the other 1/2” at the underarm seam. Looked much better so I made sure to modify the pattern to remind me for next time. I didn’t want to put all the extra fullness into the gathers or it would be too much and I was correct. There’s definitely enough fabric there already! Particularly in this heavy sweatshirt fabric with fleece backing. It was very easy to sew but definitely benefitted from extra-careful pinning, stitching and pressing.

Flushed with Successful Garment Number Two, I found a great skirt pattern from a 2006 issue of BurdaStyle magazine that I want to make next. I need a “palate cleanser” after that fairly complex project before I do it all over again with the second version. I would not have noticed this skirt at all from the photo. The model was sitting on a deck and you couldn’t see the interesting seams in her bright green skirt. The line-drawing was much more helpful but after I saw some of the finished garments on PatternReview I was convinced it was The One. They were referring to it as the Banana Skirt because of the shape of the pattern! What’s not to like about a garment with only 1 pattern piece (cut out 6 times) and an easy but invisible elastic waist? And I have the perfect fabric for it – the leftover piece from cutting out the B5244 dress (the one that I haven’t made yet). A flippy below-knee-length skirt will look great in this heavy poly/lycra double-knit in a dark go-with-everything charcoal. More on this later since the pictures are on the other computer. It should be a quick project. Barring incidents. I’m certainly on a roll now anyhow.

Because I need to trace the skirt pattern from the magazine’s pattern insert, I thought I’d discuss how I accomplish this. These photos are of another pattern for leggings that I plan to use for knickers but the technique is the same for any of them. First you have to look up the pattern instructions which are pretty abysmal! You need to find out on which sheet the pattern is located. Check out this “road map”: 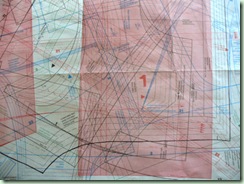 Lines and numbers going every which way! In order to save printing the pieces of several different patterns are overlapped on top of each other in different colours and orientations. It’s headache-inducing! The instructions will also tell you which line style is the one to follow for your size, such as dashed, dotted or whatever. So not only do you have to figure out the correct pattern pieces but the correct size as well. Yeesh. You just might be able to see where I ran a Sharpie pen over the one I wanted so I could see it when I put the tissue over top: 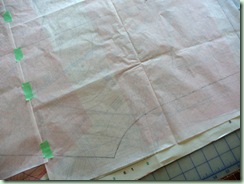 It really helped me to follow the lines easily but I’d hate to think if I had to do that for several more pieces on the same sheet. Could get ugly. Any pattern alterations will be done to the traced tissue leaving the pattern sheet intact in case you want to trace a different pattern later. Some pattern pieces also might need to be extended to the correct length or two or more joined to make one piece. It helps to check the instructions carefully to see if there are any special instructions. Occasionally you’ll be directed to measure rectangular pieces with a ruler instead of tracing. The important thing to remember is that you have to add the seam and hem allowances yourself. Ask me how I know that this step is vital!

BurdaStyle magazine is really an inexpensive way to get a number of fashion-forward European-styled patterns but it takes a lot more effort than just opening up an envelope. I’ve written before about their cryptic and often confusing instructions with very little in the way of diagrams or illustrations of the sewing steps. It pays to have a good sewing book handy or lots of sewing experience. I’ve also ranted at length about the “creative” garment styling where you really can’t see anything useful from the photo. It makes the regular “Big 4” patterns look downright WYSIWYG in comparison, doesn’t it?

However, I have piles of these magazines saved up. I got tired of paging through them so I decided to simplify finding patterns of interest by scanning the pages with the line-drawings, printing a copy and putting them in a folder together. Yet another little organising task I’ve set myself. I’m quite fond of organising. Can you tell? Gotta do something to amuse myself while I’m sick. The nasty croupy cough finally (after nearly 3 weeks) turned into a full-blown cold. Fun. Not. We shall not speak of it.

Your top looks great Louisa. The notches on those Burda sheet are just little lines and it helps to put the numbers in the corners as well. There is always something, that I have to go back and find. I am looking at making a Trench coat from the latest mag.

Great tunic, and the pockets really make it!