There’s a few questions in the comments on yesterday’s post about the “rub-off” technique for making a pattern from a finished garment. Heather, from what I’ve read there is a method of putting muslin over the garment and literally rubbing a pencil down the seams to trace it. That’s probably where the name comes from in the professional sewing industry. I think the pin method is more accurate, though in my experience it still needs some truing up after you’ve removed the garment.

Evelyn, of course you can take apart a garment if it’s worn out. It’s more time-consuming but probably a lot more accurate. However, the garments in the book were still good and/or vintage pieces that the author wouldn’t want to destroy while making a pattern out of them. There’s also a tutorial on an intriguing method using the plastic wrap Press’n Seal for copying a garment. This stuff is so handy for so many things I wonder that anyone uses it for food! My roll lives in the studio. If you aren’t familiar with it here’s a description lifted from Wikipedia:

“Glad Press'n Seal has its surface covered by shaped dimples, which hold the adhesive away from the surface. While being handled, the wrap is unsticky, but when pressure is applied the dimples are flattened and the adhesive pushed against the contacting surface, sticking them together. The adhesive used is a special edible type similar to chewing gum.”

Well, I didn’t make use of my newfound rub-off skillz yesterday. Instead I cut out the sleeveless version of Vogue 8509: 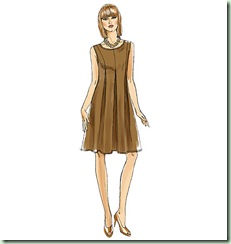 I already did all my myriad alterations on the pattern a couple of months ago so it was ready (hopefully!) to chop into my fabric. It’s a tiny woven check in what I think is a poly-blend of some sort. I purchased this stuff ages ago so I can’t remember any details. (Good reminder that I should keep better notes about my fabrics, huh?) It’s actually rust, tan and black but it “reads” as brown so I’m using brown thread to sew it with. Currently all the main seams are pinned but not sewn yet. I also needed some bias tape for the neckline and armhole binding so I got out my new 1/2” bias tape maker: 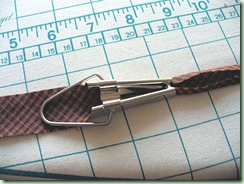 It worked pretty well though there is a bit of a learning curve with this tool, especially when going over any seams in the bias strip. The iron goes on the right there with its side next to where the folded fabric is exiting the tool. The right end is pinned to the ironing board so I have something to pull against as it feeds through. I also have a 1” as well as the 1/2” one which I think are made by Prym/Dritz. I found out there’s a better version of the tool by Clover so now I’m keeping a lookout for the 3/4” version which for me is the most useful size. There’s also a tool that can apply a strip of fusible tape as it creates the bias which I expect might be useful for quilters or other surface design applications. Of course then you have to buy the fusible tape rolls too. Have I mentioned how much I detest purchased premade bias binding? So much nicer to have perfectly matching binding.

Speaking of matching, I tried to match the check as I cut out the pieces but I don’t know how accurate I was or whether it really matters with such a tiny repeat. We’ll see how well I’ve managed! Also I have a brown and a black invisible zip of the right length and I’m having difficulty deciding which one to use. The black matches the black stripes but it seems like too much contrast on the fabric. I think the brown, which is still darker than I’d prefer, is less jarring even though pretty much all that shows is the pull-tab.

I’m looking forward to seeing how this dress works out. My fitting skills are improving exponentially but the proof is in the sewing up, right? BurdaStyle had a recent discussion of whether or not to make a toile (muslin) first and my answer is that I do as much fitting as possible in tissue. It’s much cheaper and sometimes I need to refigure, chop and tape, and retrace a couple of times before I get it right. I usually pin the tissue together and fit it on Debbie Double before I do a fresh neat copy incorporating as many of the changes as possible. Most of my fashion fabrics are pretty cheap anyhow – not a whole lot more than muslin – so I usually dive in and make the final garment from the tissue pattern. Unless I’ve made some miscalculations it usually works fine. Perhaps if I were sewing some very expensive fabrics (handwovens, anyone?) or a really complex pattern then I might break down and make a toile first. Usually I still try to make it a wearable garment. I’ve had so-called “wearable muslins” last longer and get worn more than the final special one!

I should get back up there to the studio and get sewing, shouldn’t I? I’m hoping to avoid watering my garden today if it actually rains as much as it’s supposed to. So far it’s rather dry out there.