The Calm Before The Storm

We’re in the midst of the Painting Whirlwind here and I’m really glad they’re nearly done. Today the boss has an appointment so they won’t be here until noon and hope to finish up. Yay! The house has been a little uncomfortable for me as the guys have been using the bathroom and slinging ladders around near all the windows. They’ve been polite and courteous but it doesn’t matter where I am, I feel like there are curious eyes on me! I’ve even learned to lock the bathroom door and check out the window to see where the ladders situated are before using the toilet. Sheesh. I’m sure they wonder what the heck I’m up to. I’ve been carding and spinning (more on that later), leaving skeins of yarn to dry on the deck table and working in the garden. 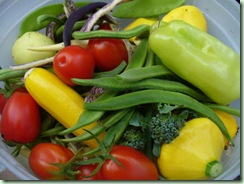 I’ve pulled out the peas now and planted some little lettuce, mizuna and cabbage seedlings in that bed. If the slugs don’t eat them all they might have time to produce something before frost. Maybe. It’s a crapshoot especially when I’ll be away for 3 weeks in September. On the other hand, I have so many beans that I need a pickle recipe to use some of them up. I want a spicy one, not dill, but I can’t find exactly what I’m looking for. Any suggestions? I never end up using the ones I freeze so I think pickles are the way to go. I’ve already made a fresh pickle with a bunch of the little lemon cucumbers. It’s really easy. Peel and slice the cukes and add some red onion slices, mix equal parts rice vinegar (or whatever is your favourite) and white sugar and stir until the sugar dissolves (I use about 1/4c each for a pint container – they don’t need to swim), pour over the cukes and onion, sprinkle on some celery seed, toss and stir and let sit in the fridge at least an hour before eating. Lasts at least a week refrigerated. Yum.

Meanwhile, I spun up a sample batt of the black Corriedale wool for T-Man’s Brownstone Pullover and managed to get a pretty decent worsted-weight yarn. There was still a rather unacceptable amount of grease in the wool and it took some really hot water and more Unicorn Power Scour to get it to come out. Just the Wool Wash didn’t cut it. Now it’s nice and springy and squooshy. I knitted a swatch with the recommended 5mm needles (I’m using Denise for this project) but after washing and drying it was out by quite a lot. So I unravelled it and steamed the yarn to get out the kinks and tried again with 4.5mm. This time I got stitch gauge but the row gauge is still out a little (2 stitches less in 4 inches). The swatch is lovely and light but cohesive so I’m not going to mess around further. 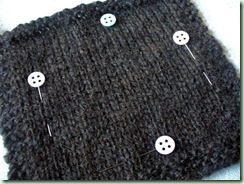 It’s hard enough to get the exact gauge even using the recommended yarn – far less something that was directly off a sheep not long ago! I do my best and then fudge the rest. At least the width will be correct and that’s the most important thing. Most of the lengthwise knitting is done to a measurement, not a row-count anyway. Though I did forget to record the swatch measurements before blocking in case they’re quite different. I’ve made that mistake before and ended up with sleeves that are too long because the yarn relaxed when washed and blocked. Maybe I need to knit another swatch. Sigh.

I’ve been carding up enough wool for a bobbin’s worth at a time. It takes 4 batts each. I think the new Pat Green Deb’s Delicate Deluxe carder with the “production” drum makes much larger batts than my 35-year-old model. The teeth are longer and closer together. It doesn’t doff very cleanly however and there is some build-up on the licker-in drum as well. It doesn’t seem to be getting worse so I’m not going to bother cleaning them off until I’m done. Which will be some time in the not-so-near future! A whole huge basket full of teased wool only made a dozen batts. More teasing, more carding, more spinning…