Well, it took a lot of work but the decks are now back in shape after being cleared for the painters. 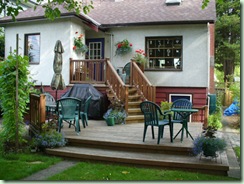 I scrubbed the upper deck (aka the back porch) which is covered in beige textured vinyl and collects dirt like nobody’s business. I washed off all the tables and chairs. I put most of the pots back except for the ones that screw onto the walls. I had to wait for T-Man to help because it takes two of us: one to hold the pot up and one to wield the screwdriver. I also needed him to drain the water garden, disassemble the pump, help me lift it back up to the top deck and put it all back together again. Sparky the local crow was discombobulated when he couldn’t find it near the garage where it’s been for the past week. He uses the water garden for a drink and it was too convenient out there. Now he’s got to be more wary because it’s returned to the accustomed spot by the back door. I tend to frighten him off when I see him there. His revenge? Poops everywhere and leaves the poor water plants trailing around the deck. We have an uneasy relationship.

I also managed to ply up my first two big skeins of the black Corriedale wool for T’s sweater: 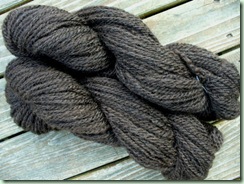 The colour isn’t really accurate. It’s more of a very dark brown-black and would just look like a dark blob in the photo if I didn’t lighten it up a little. There’s about 150 yards or so in each 100g skein. At that rate I’ll need another 7 or 8 skeins for the 1500 yds that I want. That’s a little more than I need (I think!) but I like to have a cushion since I can’t just waltz off to the store for more if I run out. If there’s extra I’ll make him a hat to go with. I have another basket full of teased wool to card today and hopefully I can spin up at least one bobbin’s worth. I’m not a technical spinner so I have no idea of the twists per inch and all that stuff. I just do it so it feels right. Seems to work.

Meanwhile I’m doing the laundry and also need to get out to the garden and water it better than the lick-and-a-promise I gave it yesterday. The bush beans and cucumbers are slowing down but the pole beans and summer squash are finally reaching their stride. I’ve already lost a few of the lettuces and baby cabbage that I planted the other day. Slugs. Evil creatures. I love them in the forest – they’re actually very interesting – but not in my garden. I get so mad at them that I’ve been known to squish the little ones with my bare hands. Ick.

I know: TMI, right? Back to work, Damselfly. The days whoosh by much too fast!