It’s cloudy and cool today and sadly summer seems to be winding down. That’s too bad because it sure took long enough to get going! We never got much real heat at all and it’s been consistently cooler than usual at night. No wonder my poor tomatoes think it’s still June! Also I’m definitely feeling like I need a holiday. Soon.

I still have things to do first though. We got some fine netting yesterday to replace the disintegrating mosquito net on the flap in the canvas part of our van. I’m going to have to hand-stitch it in somehow while standing on the cooler to reach it in situ. I also can’t pierce the canvas so this is going to be…interesting. That’s my big job for today while it’s not sunny. It gets rather hot in there otherwise. Adding even more fun to the job. Wish me luck.

Working as fast as I can I’ve spun about half of the yarn for T-Man’s Brownstone sweater. I really want to knit this while we’re away so I’d love to get the yarn all spun before we go. Maybe. It’s taking longer than I’d hoped though. I need to tease and card some more now before I can spin. I don’t like to tease the wool in the house because so much dirt falls out while I’m doing it. The little grass seeds get stuck in the rug and don’t vacuum out. That’s obviously how they got stuck in the sheep’s fleece in the first place.

I did manage to finish one thing this week: 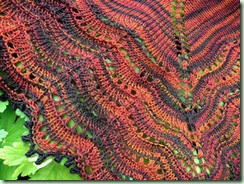 Pattern: Holden Shawlette by Mindy Wilkes, slight modifications by me.

Comments: A challenge to use this wonderful Wollmeise yarn, a gift from Lauren straight from the shop in Germany.

I used my slightly modified version of the Holden Shawlette, removing 2 rows of the stockinette centre (ending with 189 sts) and, in the process, eliminating the 2 extra stitches each side of the lace pattern. This made it much easier to knit and I think it looks tidier as well. I re-charted the repeat to clean it up and had enough yarn to work it 3.5 times instead of 2.5 making it larger.

However, I didn’t have quite enough to finish the picot edging! I was about 3 yards short and had to tink back and start the edging again with the leftover black bamboo yarn from the recent cowl project. It took about 35 yards just to bind off. Took me nearly a whole day to finish this darn thing up but I was determined to get there. For blocking, I used the heavier wires at the top of the shawl and pinned out the picots individually into scallops. With the extra repeat of the edging chart it turned out more shawl than shawlette sized. The Wollmeise yarn is quite substantial and seems to block out nicely. 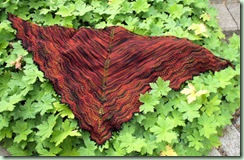 This turned out to be the Not-So-Speedy Gonzales Shawl - particularly while knitting the tedious (but lovely) picot edging for the second time!

Now I’m swatching for yet another sweater. I found a cone of worsted yarn in my stash in a tweedy oatmeal colour. I have No Idea where it came from. I swear my stash accumulates when I’m not looking! I kind of want to do the Ardsley Jacket, a free pattern from Lion Brand (Ravelry link). This is a jacket with a cutaway front, long sleeves, and a cute collar and pockets. Unfortunately not very many people have done this one so I’m not getting much helpful input from Ravelry this time. I mistakenly swatched in mostly plain stockinette so now I have to do it again in moss stitch. Doh. The jacket is nearly completely moss stitch (which I missed obviously!) except for the i-cord edging. I’m revising the pattern a little to make it a large below the waist and a medium above plus I’ll probably need to shorten the sleeves my usual 2”. Also I’ll knit the fronts and back as one and work the sleeves in the round which should eliminate some of the ridiculous amount of seaming involved. I don’t really mind sewing seams as much as some knitters do but sometimes there’s just no point in making more work for yourself. As a matter of fact, perhaps I should knit the pockets first as a swatch and save a little time and effort.

You might be wondering what happened to my sewing plans after I was so gung-ho for a month or two. I got a bit frustrated with it when my last idea didn’t work and I couldn’t get a pattern to fit on a remnant. I also felt reluctant to cut out a skirt from that hand-dyed paisley fabric in case it didn’t fit me properly. I have a problem using the Good Fabrics sometimes. Not like there’s no more fabric in the stores, hey? And then I got sidetracked by the black Corriedale wool, dyeing with my woad and Japanese indigo and harvesting from the garden. Now there’s no time to do much until I get back from my holiday so I’m putting sewing on hiatus for awhile. I have been wearing what I’ve already made though! The only pieces that aren’t in regular rotation are the gray dress and the banana skirt which are in the same heavy doubleknit and are too warm for this time of year. The brown plaid dress and the green sweatshirt tunic are great and all 3 of the black capris/shorts are worn often. I especially love the pockets in the longer shorts. I think I need to make longer pants from this pattern for winter under tunics.

Guess I had best get something useful done today. Haven’t done much so far even though I’ve been up since before 6am because T is working at home from 5am-1pm this week. His “office” is about 3 feet from the end of our bed so even though he was quiet, I can’t sleep when he has to make a phone call. It’s only a little earlier than my usual waking time anyhow. I don’t mind, especially when he gets the afternoons free. Tomorrow is Spectrum Dye Group day and we’re doing some madder experiments. I have 3 skeins of tussah silk yarn that I mordanted in rhubarb leaf yesterday that still need to be rinsed. And the bug netting sewn in. Right. More anon.

It's going to be a very sad tomato harvest this year. :( I was so looking forward to making & canning salsa & tomato sauce. Oh well. Next year. That gardeners refrain! LOL

The shawl looks like a butterflies wing - beautiful. I was swimming yesterday, not today. ;( Summer over too quickly - oh well, I have lots of packing to do.

Got any ideas what to do with Green tomatoes? I have tonnes of tomatoes on my plants. I'm just worried they won't ripen before it's done.