Having dye plants in the garden certainly encourages me to use them. Yesterday I chopped off a couple of the tall stalks from the first-year bolted patch. They were taller than I am! I found the best way to chop them for dye is to strip off the leaves from the lower stem and snip them with kitchen shears. Then remove the upper stem and flower stalks and snip them up too. The lower stalks are too hard to chop easily even with the garden clipper and apparently there isn’t much dye in the anyway so they go in the compost. The thinner stalks are easier to cut up if I open the tube and separate longitudinal sections before snipping them. Here’s the results: 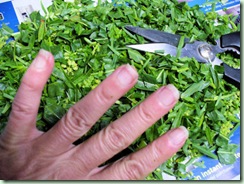 Note how I removed a snip of my ring-fingernail while I was at it! I ended up with about 200g of fresh weld: leaves, flower heads and thinner stems. After simmering at low temps for an hour with the addition of a couple of flavourless Tums tablets, I got this: 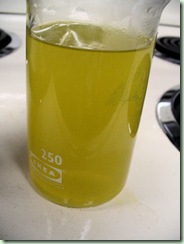 This is just a sample dipped out of the pot. Doesn’t look particularly intense, does it? However, the results were pretty spectacular: 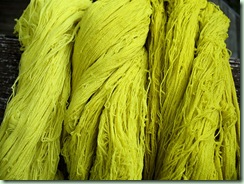 Right to left are darkest, slightly-lighter first exhaust and slightly-lighter-again second exhaust on fine rayon weaving yarn mordanted in 5% alum acetate. These are still wet so are somewhat darker than they really are. There was still some dye in the pot but I ran out of mordanted items to put in it! The deepest one has a slightly green cast and the lightest one is a true lemon yellow. Very intense even though it comes out of a rather insipid-looking dye bath. Pretty amazing colour really – it nearly vibrates! Now I know why it was such an important yellow dye to the ancients. Along with its reported excellent lightfastness, it has fair washfastness and will dye all the usual fibres. Weld is also easy to cultivate and actually grows wild in places where it escaped the dyers in the UK. Also apparently in my own garden where several self-sown plants have shown up.

I dyed 4 skeins total, including a second one of the darkest yellow. I’m going to save that one but the three in the photo are going to be dipped into woad for my own home-grown Lincoln green. In my childhood’s cherished Robin Hood storybook, he and his Merry Men always wore Lincoln green to blend into the woods hiding from the evil Sherriff of Nottingham. Though I think this will be a pretty bright green! Perhaps they got their clothes a little dirty running around in the forest? Medieval camouflage? I’ve always wanted to dye my own version and here’s my chance.

Hey, lookit the cool prezzie I got from my friend Lauren! (Hi, hon’!) She was recently in Germany and went to the Wollmeise shop and brought me back my very own skein of Twin 80% merino superwash/20% PA (is that nylon?) in Gonzales colourway: 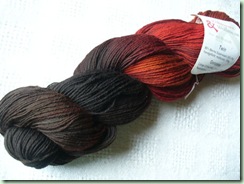 Does she know my colours or what? This is a 150g skein with 510 yds so there’s enough for a shawl. I’ve decided that I’m going to make another Holden Shawlette which looks very good in variegated yarns. Thanks so much, sweetie!

Unfortunately with my self-imposed rule of no more than two knitting projects at a time, I’m going to have to finish something first before I can start anything else. I’m nearly to the toe on one Segue Sock and just past the gusset on the other one. The Black Bamboo Cowl is about at the halfway point. I still haven’t gotten much more of the black Corriedale wool teased up though. I don’t want to do it in the house because it’s dusty but outside is kind of a disaster. We had to move all the plants off the deck and the furniture down from the top deck while we have the eaves and peaks of the house cleaned and painted. They did the pressure washing yesterday. The upper deck is covered in dirt now! (And the windowsills, the front stairs, the windows etc.) Not his job to clean up apparently. The painters are coming next week and then there’s a cleanup crew so we live with the mess until then. I hate having other people do things. Never up to my standards. But I can’t do this job myself and neither can T-Man so what can you do?

That is some yellow! The green is going to be great - looking forward to stage two.

Always in awe of your talents, girl! Is there a leaf-based pattern in its future?