Back To School – But Not For Me

I’m thinking of my grandbeasties today – the bigger ones at least. Stargazer will be starting full-day kindergarten – a big step for him. He won’t be 5 until the very end of December so he’ll likely be the youngest in class. He has had some experience with playschool a couple of days a week, but I feel fulltime is hard for kids who haven’t been in daycare. I really hope he has a good experience and enjoys the learning. His big sister Super-Princess is off to grade two. She’s still struggling a little with reading and writing but her math skills are excellent. Her problem is mostly with an innate embarrassment about making a mistake. This year she should be able to get over the hump and make friends with words. It opens the doors to learning everything else.

Oddly instead of having weather that smells of fall and back-to-school, we’re having some of the warmest and sunniest days of the entire summer. It’s almost making me wish we weren’t heading inland on Friday where it’s actually going to be hot! We aren’t fooled though. We’ll be in the mountains where it could change into winter in the blink of an eye. I’m wisely packing enough clothing for any eventuality: shorts, skirts, sunhat, sandals, pants, fleece vests, raingear, boots, woolly scarf, gloves, undershirts, longjohns, turtlenecks, hoodie…  Good thing I have an expanding suitcase. Comfort trumps fashion any day.

In crafty news, my knitting these days seems doomed to difficulties. I think I’ve mentioned that I’ve started a new project just to have something on the needles for those rare downtimes in the Packing Frenzy. In case you missed it, it’s the Ardsley Jacket, a free pattern from Lion Brand Yarn and it’s a cutaway shape in a double-moss stitch with pockets, collar and i-cord edging. (Ravelry link, pattern link.) I’m using a cone of 2-ply oatmeal tweed wool that I found in the weaving stash. No idea where I got it but it was probably transferred from somebody else’s stash. Anyway, for certain it’s rather…ahem, vintage. I started knitting the pockets as a swatch and needed to go down a needle size to 5mm to get gauge in this moss stitch. So far so good: 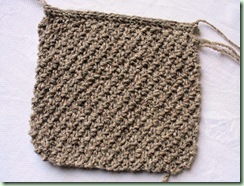 No, it’s not really crooked, just my camera angle. And it’s also not yet blocked. Wanna see the i-cord edge up close? 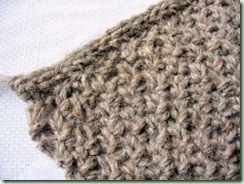 I think it’s quite cunning! I had to go down 2 needle sizes to 4mm dpns and then pick up only the front loop of the bind-off stitches to get it to work properly. I also picked up the stitches on the pocket one at a time with the end of the dpn as I went along so the next stitch was in place to knit it together with the last i-cord stitch. It’s much easier than trying to knit 2 tight stitches together from 2 different needles. I like the finish the i-cord gives even if it is rather tedious to knit. I’ll have lots more practice before I’m done this sweater!

However while knitting the second pocket I discovered a break in one of the yarn plies. Then another break about 8 yards later. I started winding off to see what was up and after a couple more I think I’ve come to the end of the breaks. If not, there will be a few joins in this sweater! Par for the course when using vintage wool. This type of damage is often caused by carpet beetles rather than moths. They dig in to one spot so the yarn breaks in the same place as the cone unwinds. The critter is long gone though so there’s no need to give the cone an “arctic vacation” in the freezer. I’m getting a sweater for free except for the work of knitting it so I’m not really complaining too much. This project is coming with us – among others. I’d hate to run out of knitting halfway through the holiday. There unfortunately aren’t a lot of yarn shops where we’re going. (I am going to try to get to Fabric Depot in Portland however. It’s reputed to be the largest fabric store in America. Sounds good to me!)

Yes, I know I should be spinning for T-Man’s Brownstone Sweater but first I have to card more wool. And I can’t start knitting it until I wind some cakes from the washed skeins that I’ve spun so far. I plan to spend the rest of the day upstairs. Cleaning up the studio/study area and packing the knitting supplies, patterns and books to read is my Big Job for today. I have been skipping from one project to another for ages so it’s quite a mess up there. Add teasing, carding and spinning the fleece and it’s dirty as well as messy. Wish me luck. I’ll try not to get distracted with all the possibilities in my personal Fibre Heaven.