T-Man and I finally got all the packing, cleaning, gardening and organising done on Friday, September 9th. He had to work (from home, luckily) but we were dying to get going so were ready to leave just after 3pm. Of course rush hour was starting to gear up and the driving was somewhat hairy until we got well out of town. We were both excited to be finally on the road anyway.

Day 1 - Our first destination was good old familiar Manning Park. We got there around supper time and since we were both pretty tired we didn’t get very much of a walk and opted for early bedtime. The weather was still quite warm as it was for most of our trip. It didn’t seem like summer was winding down at all: no leaves changing anywhere we looked, not even the telltale vine maples or trembling aspen.

Day 2 – We were off down the Crowsnest Highway 3 to Kettle River. Summer was still in full swing here too. There were lots of people playing in the water, floating down the river on air mattresses and fly fishing hip deep. After watching for awhile we went for a walk on the railway bed. Here’s a view from the gently peeling steel bridge that once carried trains across the river: 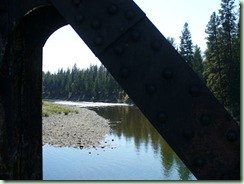 Day 3 - We decided to take a shorter jump than originally planned so we drove along the Crowsnest and sidestepped to Champion Lakes. The weather was downright hot so we took our improvised swimming gear to the beach: 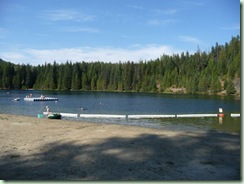 Even T-Man went in with the fishies (an event nearly unheard of!) but I didn’t get a picture to prove it because I was already in the water: 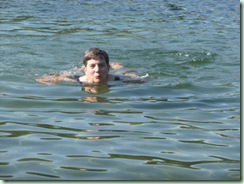 I think I was imitating one of the Western Painted Turtles that these lakes are known for. It was refreshing but I am definitely out of swimming condition.

Day 4 – We headed for the south-eastern corner of BC and a new provincial park for us: Kikomun Creek. We got a little lost trying to find it because my information had the names of the roads incorrectly. There were signs of course but not were we expected to find them because there’s actually 2 ways in whether you’re heading west or east but only signs from the east side. Anyway, it’s a big park in open Ponderosa forest with a number of lakes including a large reservoir. We stayed at the largest of the 3 campgrounds and rode our bikes several kilometres down to the reservoir to check out the rest of the place. I was very happy for my electric assist on the way back up, I’ll tell you! After we got back to camp the yellowjackets (pesky wasps!) were really annoying so we repaired down the trail to Hidden Lake with our chairs, books and glasses of wine: 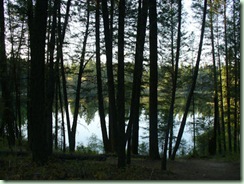 This was the view. Lovely huh? This lake also has turtles and there’s a marked Turtle Crossing on the road to warn drivers so they don’t get squished. We didn’t see any though, even the next morning when we hiked all the way around the lake before we left. We did see loons though.

Day 5 – Finally out of BC and into Alberta to Waterton Lakes. We stayed here for two days in the campground right at the lakeshore next to Waterton Village. Incredible views, hot showers and herds of deer galumphing through. The funniest sight was about 4 deer blocking the campground entrance while several vehicles waited for them to shift off the road. And waited. And waited. Animals have the right-of-way here and they know it. They were in no hurry at all to move! At least it was funny until it was our turn to get blocked the next day. But not by deer.

So we got a bear…er, tourist to take our picture at Cameron Falls, which is right in Waterton Village: 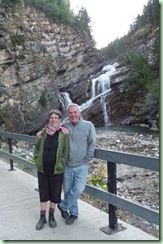 Day 6 – From the village we drove up the Akamina Parkway to Cameron Lake, the source of their pretty waterfall: 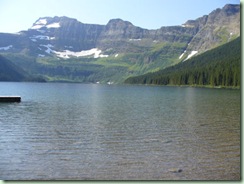 Believe it or not, in this photo you can see 2 provinces and 1 state. We were standing in Alberta, the top of the peak to the right is BC and those mountains in the middle are actually in Montana. What? You can’t see the dotted line that goes across the last bit of the lake? Me neither. Also those green meadows are prime grizzly bear habitat so the trail ends before the end of the lake (still in Canada) so as not to disturb them. I don’t think the bears care which country, state or province they’re in though! We didn’t see any bears at all on this trip, which is unusual but not a bad thing since we camped and hiked in an awful lot of bear country. We didn’t really want to run into one.

We saw lots of other critters anyhow. Including the flock of willow ptarmigan that stopped us on the road on the way back down. They were walking across v  e  r  y   s  l  o  w  l  y  until somebody gave an alarm and they all scooted off at a run into the shrubbery. Hilarious! We’d never seen ptarmigan before. Sorry we didn’t manage to get a photo.

Day 7 – This was the day we headed over the border into the US at cute little Chief Mountain Customs located in what seems like the middle of nowhere. This time we remembered to ask for a passport stamp which is a special bear design. After we got them, the officer teased us that we’d have to pay for it but he was just joking. Brat. T almost believed him for a minute.

At least he didn’t ask about any of the van’s possibly contraband contents. We were very happy that I’d packed so much food because we hadn’t had a chance to shop for groceries anywhere except for the fruit and a few veggies we got in Keremeos on Day 2 and for which I had a customs-acceptable receipt. All we bought was lots of ice when we filled up the tank with gas. There are no Safeways or anything out there in the mountains! Lots of coffee shops and rustic hotel restaurants however but we never go there. By the time we got into Glacier National Park at Many Glacier campground we were getting a little low on perishables and out of meat entirely. So I made vegetarian chilli instead. Can’t keep a good cook down even if she only has two propane burners and a cooler.

This was the first time we’d been to Many Glacier and it was lovely. The campground tends to fill fast in summer but we were there just before they turn off the water for winter so although it was busy, it didn’t always fill up by evening. The weather was a little iffy with wind and a light sprinkle of rain at one point. We needed jackets unless we were actively hiking. Which of course we did along the side of Swiftcurrent Lake: 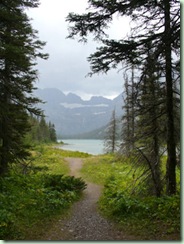 And continuing all the way around Pauline Lake. A lot of the trail was pretty empty of people so we did the occasional loud clapping thing to alert any bears. Happily there weren’t any obvious ones around!

Day 8 - Yes, Many Glacier (no ‘s’ at the end for whatever reason) has many glaciers around it: 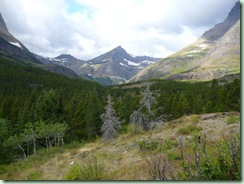 Also lots of interesting trails to hike. We did a couple of the easier ones in the two days we were there. We missed the moose that many people saw but did see mountain goats. They were so high up across the lake that I couldn’t get any half-decent photos. They were just too far away so we contented ourselves with watching them with binoculars. We saw a number of delightful waterfalls too.

Day 9 – We reluctantly left Glacier early to carry on farther south in Montana towards Yellowstone. Sort of midway between we stayed at Missouri Headwaters State Park. This is where good old Lewis & Clark discovered the spot in 1805 where 3 rivers: the Gallatin, the Madison and the Jefferson join together to become the Missouri River. It’s a beautiful area and virtually unchanged, though it was once the site of a proposed Gallatin City that never quite materialised. Here’s the haunting remains of the hotel: 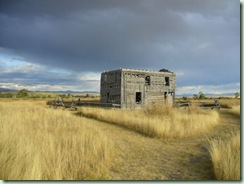 Much older indeed is this ancient pictograph from a small cave nearby: 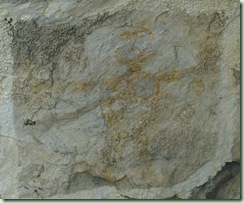 The accompanying sign didn’t really add anything to the story but does help you to see the degraded image better: 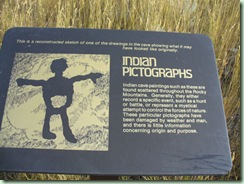 Poor guy has a hole in his tummy! That’s gotta hurt. The cave was around to the left in this interestingly holey rocky outcropping: 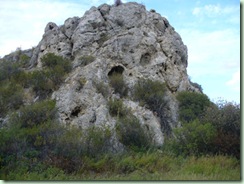 We also climbed up on the back side where there’s a relatively easy trail and a bench at the top with quite a spectacular view of the entangled rivers.

So here we are – just over a week into the trip log and I’ve barely showed you a fraction of the things we saw. Just hit the highlights or it’ll take me nearly as long to describe it as it did to do it! Part Two coming soon. We’re finally getting to the geysers. Yay.

really fun to read, I am bit envious...