If you’ve been reading along, you’ll recall that my first experience this year growing Japanese indigo (Persicaria tinctoria) was really successful. I also had really good results extracting and using the dye. I got several harvests during the season and could probably have gotten one more but unfortunately I was away on holiday and then didn’t have time when I got home in October. I used a very similar technique to the way I do woad - going from picking all the way through to dyeing in one continuous session. A couple of my friends came over to help each time and we dyed a variety of items and got good blues, though most of them past the first dip were fairly light, much like my usual results with woad. The continuous session vat is not very concentrated. But very pretty anyway!

Japanese indigo is obviously easy to grow and easy to use but the most worrisome thing for me was producing my own seeds for next year. The plants started to bloom in early September but the weather was getting cooler. In October we had a few light frosts so I picked a couple of stems that were well along in bloom and put them in a vase in a sunny window inside. They did well and even started rooting in the water. So later I picked a larger bouquet and added them to the collection. 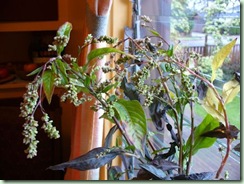 Yesterday I noticed that there were some mature seeds but also some of the flower stems were getting an infestation of aphids and the leaves were turning blue and drying out. They had to go so I chopped the flower stems off: 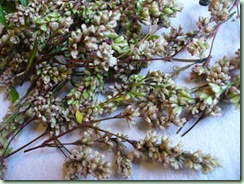 Some were starting to dry out but some were still very immature. I spent quite a lot of time carefully popping out the hard seeds from the flower heads between my fingernails: 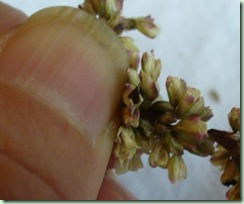 Some stems had quite a lot and some very few or none at all. As I sadly suspected! The shiny dark brown mature seeds are 3-sided and about as large as a sesame seed: 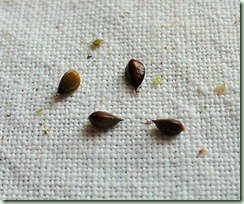 I didn’t find very many in total but I'm pretty sure I have enough for next year. Perhaps a teaspoon’s worth: 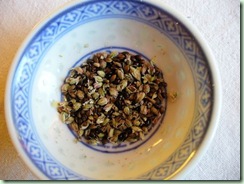 I didn’t bother to clean the chaff off them all but no matter. I also have some seeds left from the ones I got by mail last February from a fellow enthusiast in Virginia. Even if germination is poor the second year I feel like they will be a fall-back if mine aren't good enough.

I was really glad that I'd brought some flower stems indoors when I did. My poor plants are now just a pile of bluish goo after we got an inch of snow last week! 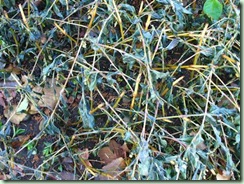 Poor things. In contrast the woad right next to them survived just fine! Next spring I plan to try a few Japanese indigo plants in my greenhouse along with the tomatoes to see if that protects them better on their way to seed. It's quite amazing to me how long it takes for the flower heads to mature – 3 months. I guess it was just too cold for them to grow quickly. I heard about one person who kept running out each evening to put sheets over her crop and then removing the sheets each morning after it warmed up some. I could also try that I suppose although my dye patch is out along the boulevard where people walk by with their dogs so sheets might be rather vulnerable to tampering or destruction. We also had quite a few really strong winds this fall so they would have had to be very well secured. It is another option to consider though. Hey! I have a portable cold frame I could have used but never thought of it until just now. Next time.

It was a near thing but I’m happy to have at least a few home-grown seeds from my first crop of Japanese indigo. It’s a lovely dye and worth the space in my little dye garden. The next chapter of this story will resume in the spring.

Meanwhile I also have a Finished Object to share: 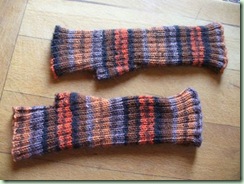 Modifications: I used the same cast-on as the kneehighs: cast-on, k 2 rows plain, change to 2/2 rib for the remainder of the cuff. I also made the cuff slightly longer. Otherwise, as she wrote.

Comments: A quick and easy but very useful fingerless mitt pattern. I didn’t try to match the stripes and went for a staggered effect just as with the knee socks. It took the rest of the 3rd and 4th balls of yarn left from the socks with very little left over. I still have 2 more balls of this yarn. Maybe a hat?

In other crafty news, the Dark o’the Moon gloves (using the Knotty Gloves pattern by Julia Mueller) are coming along. Still slowly but growing. I’ve decided that I need to pull out my poor sad Oatmeal Jacket because it just doesn’t fit properly. I think I’ll try to re-jig the pattern again and start over. I still can’t guarantee this will end up a wearable sweater but I’m nothing if not persistent. At least most of the time.

I have more sewing to get to as well. I don’t mind taking my time and hopefully doing things right, rather than whip something up quickly that either doesn’t fit properly or doesn’t hold up over time. I’m still exploring my new/old style, a different way of putting things together, more deliberate and less expedient. It does mean that I have to change more often! One outfit to go out walking. Another to rake leaves in. Light and comfy for my 20 minutes on the elliptical trainer. More layers when it gets cold in my house. However it’s much better than the old yoga pants and a t-shirt which was my usual uniform for the last few years. More me. Besides, the yoga pants are wearing out and NOTHING FITS ME in the stores. I’m obviously not the manufacturers’ “target audience”. (Who really is?) So I’m my own personal bespoke tailor instead. Take that, Ready-To-Wear!

You're an inspiration all round!