Sorry about that! My sister had a wonderful visit. We spun yarn; we dyed yarn; we knitted; we shopped; we ate and drank. We did not take photos. Oops. She and her family are now in San Diego and will soon depart on a (very safe) cruise to Hawaii. And I’m left here in the Deep Freeze! It’s been ridiculously cold for the last few days with a skiff of snow. I’ve shovelled, or more accurately, swept – twice. Tomorrow it threatens to warm up and rain it all away again. Winter in Lotus Land is very unpredictable. Either we’re complaining about the grey and the rain or we’re complaining about the wee bit of ice on the streets and the need to clean off the sidewalks before 10am (city ordinance). No pleasing some people.

On the crafty front, I’ve finished a few items but haven’t written them up yet. I have some photos (yay!) but they’re still in my new camera. I have also recently received an email from a weaver with many questions on an article I wrote for the now-defunct Weaver’s magazine way back in the dark ages of the ‘90’s. I do NOT remember the details and so far I haven’t located either the article or my notes. She wants to weave it this week. Ummm…

I have to admit though, it was a lot of fun to spend some quality time with with my sister, D: 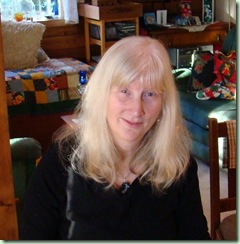 She’s two years younger than I am but we only met 20 years ago. (We are half-siblings and were both adopted out separately. It’s a long story.) But right away we discovered that she loves many of the same things that I do. She had a loom, a spinning wheel and angora bunnies. Me too. (Though I no longer have the bunnies.) Interesting, doncha think, in light of the fact that we both grew up in different families in different cities? Genetics. However, she resembles our mother and I don’t. Genes are funny things. Heh. Doncha just love her beautiful silver hair? Envy.

So for the first time ever with nearly a week to ourselves, I managed to give D a few pointers on her spinning. She was rusty but reasonably competent. The problems she was having was with her Louet S-90 wheel (yes, just like mine!) which needed a new drive band. I set her up with a piece of S’getti String (round plastic lacing) but it wasn’t a total solution for her because it kept jumping off the whorls. It worked well enough though to get a number of skeins spun so she could learn how to dye-paint them. We went to Birkeland Bros for some wool and Maiwa Supply for dyes so she can do more spinning and dyeing when she gets home. She also spent time at Maiwa deciding on some of the beautiful Ajrakh block-printed duvet covers and coordinating pillow cases for her guest house in Haida Gwaii. So fabulous.

And there was even more shopping. We went on a pilgrimage to Voyageur Soap and Candle in Langley. D makes her own soap and other bath items so she had mail-order experience with this company but had never actually been there before. She picked up some potassium lye which can’t be mailed to her and a bunch of cute soap moulds. I managed to squeak out of there with only a few new jars for cream and lip balm. Somehow I keep giving them away. Don’t know how that happens.

Interestingly, although D can crochet she was unfamiliar with knitting (as was our mom) so after she dye-painted her yarn in fun bright colours we had a knitting lesson. Because she was already able to crochet, I showed her how to knit Continental style which is the way I’ve knit since I learned from a German friend in the ‘70’s. I never wanted to go back to the English method that I learned as a child and now I can barely knit that way any more. At least Continental uses the same tension system as crochet so it’s a little easier to learn for someone with those skills. After a period of awkwardness and a few mistakes, D was doing pretty well. I know she was having fun because she packed up her yarn and knitting to take with her on the cruise!

Now the house is much too quiet. Last night I slept like a log for about 11 hours and feel much brighter. Obviously we aren’t used to having guests in our little house! They were great anyway and didn’t mind the rather primitive conditions. We only had D’s husband and teenaged son for one night but they’ll be stopping through on the way home again.

And I need to get back to accomplishing something other than food, laundry, dishes and entertaining. Tonight is my weavers’ guild meeting. Hope it doesn’t snow like it’s supposed to. I’d like to get home safely before it warms up and turns to rain tomorrow. More anon. Maybe even with pictures!