Well, my persistence with the seam ripper paid off. Sort of. I picked out all the stitches holding the cups and channelling in and added a curved strip of the cotton jersey fused with tricot knit interfacing. This effectively increased the cups by a half-inch or at least one cup-size which seemed like it would be enough. I had to add some to the top of the bridge also to match. I didn’t remove much of the stitching holding the elastics in place and they went back in place incorporating the extra cup depth just fine. The channelling was now a little short so I tried a pair of the slightly smaller and somewhat shorter underwires and they fit quite well. The only other thing I did was some more seam ripping so I could shave a little off the apex of the cups and tapering to the sides. There was some wrinkling there which was improved after this extra finessing. Now this is truly a Franken-Bra! 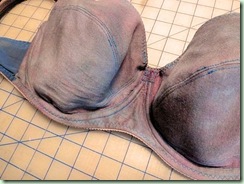 Lots of stitching and re-stitching, starting and stopping. It’s not one of those lovely lacey things you see others making! However, it does fit not too badly now – except that the straps still fall down. My narrow shoulders, darn ’em! Nothing I could do about that at this point in the construction to fix it unfortunately. 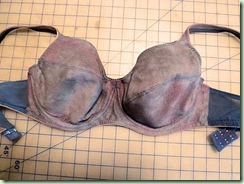 So flushed with success (finally!), I made up the matching panties and now I have my very first set: 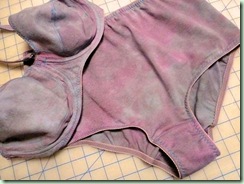 Not particularly attractive I suppose but functional and quite comfortable. I’m wearing them as I type! Yes, I have clothes on top. Anyhow the only person besides me that will ever see them is T-Man. And he’s pretty impressed with my new profile. LOL! I’ve got an extra inch out front and a 1/2” lift up so it wasn’t all for nought. Va-va-voom!

After all that I feel a little more confident that my next bra will be a definite improvement. Hopefully I can solve the slipping bra straps problem as well and I’ll be pretty close to perfection. And then I can quickly produce a wardrobe’s worth of new bras. I’ll have to go get some more underwires first now that I’ve decided I like them. As a side-effect of all this research and sewing, I’m now much more clear on what size bra I wear and how to fit one on myself. They aren’t kidding when they say that most women are wearing the wrong size bra! I’ve obviously proved that point myself. Sheesh. No wonder I wasn’t comfortable with underwires before. I didn’t try on anything remotely in the right size range! I still hate the horribly over-padded things though and prefer something softer and simpler. Preferably with straps that Stay! Up!

In other crafty news, I now have about a square metre of the Ten Stitch Blanket knitted. I’m having great fun with this and the ever-changing yarns keep me quite amused. However, I don’t think I’ve appreciably reduced the sock leftovers much at all. Sigh. Now T is asking for his own blankie too which should go some lengths toward using up more of the bits and bobs. I’ve been knitting a section and then winding and joining new lengths for the next section as I go. A day’s or so worth of knitting at a time. It’s working out quite well. I’m able to plan the colours a little but there’s still a lot of serendipity to the way they fall. Plus it’s really tedious to make all the Russian joins so if I only do a few at a time I don’t get bored. Works for me.

What else? Oh yeah. We went and got our seeds for this year’s garden. Even though it’s feeling like spring with the crocuses and daffodils just peeking out, we still had flakes of snow falling. I’m only going to start the really slow stuff right away. I don’t want to be too early with anything since the garden is still a mud puddle and it’s too wet to start turning the fall rye over yet. It’s starting to grow now though so it will need to go as soon as we have a number of dry days in a row. (If that ever happens.) If I’m a bit more wary than I used to be, the last few years we’ve been teased with signs of spring and then smacked with colder weather again. And the cooler spring weather lasts all the way into June or even July. Weirdness.