Some jerk has been stealing from us. And over a period of a few weeks too. Not money; not household items; not anything you would expect. The *%&^#$ have been stealing branches from our curly willow! 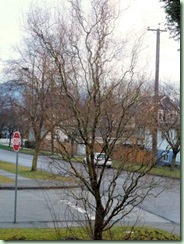 We might not have even noticed if they’d just taken a few small twigs but no, they took some pretty big chunks out of the poor tree. We could even see the white scars from the house! And not neatly done either. Grrrrr… now we have to prune more than we would prefer to even it out and tidy things up. Yes, I know these things are pricey at the florist but really! This tree is on our property even though it’s right at a very public corner. Man, I wish I could catch the so-and-so. I doubt the cops would come but I would at least be able to give them a piece of my mind! That tree was planted over 10 years ago with a branch from our son’s wedding arrangement. It’s special. Go grow your own, darn it. Oh, yeah. I guess you can now, huh?

Moving onto happier things. Last week I got to spend a couple of (exhausting!) days with my littlest grandbeastie, Rosebud, while her parents attended a conference. We had so much fun!

Unfortunately it was raining so we couldn’t go to the park. We had to find amusements at home. Keeping up with a one-year-old is impossible! Even if she’s not quite walking yet, she can sure get around and into everything. Toss the CD’s, DVD’s and books on the floor? Check. Pull the tablecloth off? Check. Spread toys from one end of the house to the other? Check. Now I know why I had my kids when I was in my early 20’s. I was young enough then to try to keep up.

Rosebud was really good though and had nice long naps in her playpen in my study so I could have a bit of a break. She didn’t even cry when she woke up. I just heard her singing to herself! This kid has sound effects for everything, even crawling. (“Ee-oo, ee-oo, ee-oo.”) So cute. She’s just learning to talk so we worked on “up/down” and “open/shut” along with watching the birds at the feeder. She confused me with “hi, jee-jee” until I realised it meant “hi, cheep-cheep”. The only difficulty we had was when I tried to cut her bangs for the first time so she could see. (Yes, I got permission from mommy and daddy!) I got one chop in and that was that. So they’re just a little crooked. Somebody will have to get her while she’s asleep to finish the job! The first photo shows how long her bangs used to be. At least now they aren’t in her eyes and bugging her.

Of course it took me two days to recuperate afterwards! Plus several shoulder and neck massages. If you babysit all the time you build up to it, but I only get to do this once in awhile. I’m pretty strong for an old(-er) lady but a toddler is heavy. Just try schlepping a 25-lb sack of flour around for 2 days and you’ll have some idea. Toddlers are a lot cuter though.

So what else have I been up to? I finished the Embers Cowl and it’s washed and blocking. I tried to use every scrap of the qiviut yarn but I still have a tiny ball left. That stuff goes much farther than you’d expect! But then it had better do since it costs the earth. It’s quite lovely and I’ll show it off as soon as it dries and I can get some photos.

I’ve been plugging away on the Ten Stitch Scraps Blanket. It was an easy thing to pick up and put down while I was babysitting. I tried winding an super-ball of sock yarn scraps but didn’t get much farther than a couple of lengths before I realised that although I think of this as random, it’s not really. I still like a little control over where things end up and how long the sections are. It does help if I can at least make smaller balls of connected lengths though so I don’t have to constantly stop and join a new one. I’m quite liking the effect but it’s slow going. Good for TV watching but not especially good for reading because there’s constant turning and joining going on. What really surprises me however is that all sock yarns are not the same diameter or texture. Somehow they just go together fine anyway.

No sewing has ensued but hopefully I’ll get to some of that later today. I need to play with patterns for a bit before cutting out my next project. More anon.

Lots of good work that you have been up to. But, ooh, willow thief!! I would write a really nasty note and pin it to the tree. Maybe hook up a motion detector light to freak them out. Nasty - hope they stay away.
Oh, and this isn't the right post, but you did an awesome job on the undies. I should follow your example.

Yeah, I thought about leaving a sign. Not that the thief will respect it or anything. At least they would know that we're on to 'em. If any more branches get chopped, I'll consider it. Meanwhile it seems as if they've heisted enough for the moment.