Bra Saga – What Part Are We Up To?

Goodness, I’ve been quiet for much too long, haven’t I? I’ve been both busy and lazy. Good combination methinks! Since I have nothing to show for the lazy part except a lot of reading and movie-watching (Hugo – mesmerising; Attack the Block – good sci-fi with a twist), I’ll have to talk about the busy part.

I finished the Black and Tan Bra, but not not before I had to do the same thing as I did with the first one and pick apart the cup seam to re-stitch the tip to underarm area tighter. After comparing the second pattern version to the original 36D, it seems that I inadvertently added more in this area than I should have. Doh. It fits really well now and the straps stay up pretty well if I do it up to the tightest hooks and eyes. That brings the straps closest together at centre back. It’s quite pretty too in its two-tone colourway: 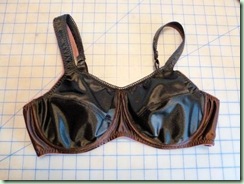 So I’ve got the gist of it now, bra wires the right size and surprisingly comfortable. Yay! And I was so right about being football-shaped. See? 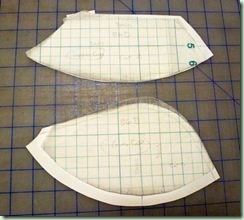 I layered the straight 36D (squared tissue) over my final pattern (plain white paper). If I had the time and patience I’d outline them to show the differences better, but I’m hoping you can get the gist. The upper cup (top) has more width at the centre (right side) and a little at the top. I also moved the attachment point for the straps over a little toward the centre. The lower cup has more depth at the bottom and at the underarm side (left). I also shaved a little off the peak. 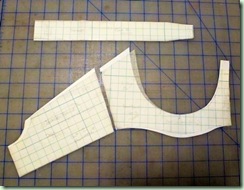 The straps are unchanged. The back band has a little added to the top where it attaches to the centre band. I also moved the attachment point for the straps by shortening that little curve in the centre back. The front band needed the curve for the cup opened a little wider and higher at the underarm edge plus a little extension at the top of the bridge. I also added a sliver to the area of the band under the cup to accommodate both the wire channelling and the elastic without overlapping. Whew! Don’t worry if you didn’t get all that. It’s kind of mind-boggling! But my idea of fun puzzles.

OK. So now I have to test out my third version to see if I’ve finally got it right. I had a lovely trip on Wednesday last back down to Dressew. My excuse was more bra fodder (wires and elastics) but I also got some interesting fabrics that I hope will work for bra cups and bands. (I also got lost in the remnant bins and came home with 9 pieces of fabric in total but that’s another story – or many!) I decided that instead of immediately sewing up the black and chocolate brown bras from my kits, I would make yet another test bra. Here’s the beginning up to where I need to start adding the elastics: 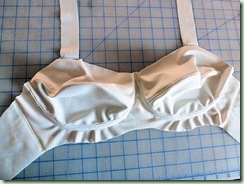 It’s kind of a technical knit fabric with tiny holes in it in an eggshell colour that matches the plain powernet. (Remember the stuff I tried dyeing back aways?) This mesh fabric is not very stretchy but quite strong which is what is needed. I’m hoping it will make a cool summer-weight bra. I didn’t want to put the magenta wire channelling in this bra, thinking it would show too much what with the holes and all. So I made my own channelling! A crosswise strip (the direction with the least stretch) 1.5” wide and folded exactly like double-fold bias tape. Stitched down each side and there you have it – matching channelling! Works too. I tested.

So now I have to finished sewing ’er up. And then we’ll see if I got the pattern right finally. Isn’t this exciting?

Probably won’t get much sewing done today though. The bigger grandbeasties are coming over. Poor things are having an impromptu 3-day holiday from school while their teachers wrestle with the provincial government over their contract. Don’t get me started. This is such déjà vu! The same issue has been coming up in the same way since back when their parents were in grade school. I seem to remember being the drop-off point for a bunch of kids whose parents were unable to find alternative childcare for them. And a lot more parents work these days. I get it though – inconvenienced and annoyed parents should be just the pressure needed to get the thing solved. Nobody is going to be happy in the end anyway. Except the kids who get an extra spring break!

Only my mom would show her underwear on the internet...

Hey, Milady Daughter! At least I'm not WEARING them on the Internets!

Valid point. I think you'd have to charge money if you were going to do that, mom. =)