This is going to be a relatively quick post. I finished my black fleece jacket but haven’t gotten photos yet. Plus it’s too warm to wear it right now! I knew that was going to happen. More on that project soon. What I really have to show off today are my new shoes: 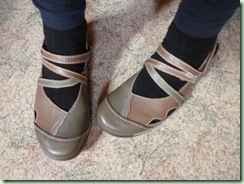 Cute Romikas in khaki and taupe. Lots of velcro adjustments. Removable suede footbeds. Best of all – immediately comfortable. Yay! I’ve been on a hunt for a new pair of shoes that I can actually walk in for quite awhile now. I’ve dragged poor T-Man into innumerable shoe stores. This one was a little indie shop happily called Comfy Feet and we were walking by so I just slipped in on a whim. I was really looking for something in gray but I’ll settle for these which coordinate quite well with a lot of items in my wardrobe. The best part is I wore them home directly! Several kilometres later and no chafing or pinching. Just enough support for my fussy feets. So I’m in love with Romika, a German company started in the 1920’s but now part of the Josef Seibel group. These are really well made but in Vietnam. Nobody manufactures in their own country these days, do they?

I also got out in the garden for a while and it felt really good to play in the dirt again! There is so much more to do, but then there always is with a garden. We’re still trying to prepare the beds for planting while I spend every day bringing out the flats of seedlings and then putting them back inside at night. I think I could have left them out last night though. It was quite toasty! I’ll probably start leaving them in the greenhouse now until they can get in their beds. Everything is doing really well except for that supposed scourge of the west, woad. My seeds are not germinating and I’ve replanted them twice. I only have one stinkin’ plant out of about 2 dozen seeds. How odd. I’m not really bummed though because I’m cutting down on my dye plants this year until I use some of what I already have!

Off to the studio. I have a big shirt that I started to sew so long ago I don’t remember when that was. The pattern is dated in the ‘90’s and it is voluminous! I have plans to use my personal block to trim it down and restyle it into something more reasonable. The fabric is nice even though it’s an oatmeal-coloured blend of unknown origins. I liked it enough not to pitch the thing so it behoves me to do something with it.

Those shoes really are cuties! I'm so jealous...

I can't wear 'normal' shoes anymore as my right foot has a nasty arthritic deformity (for the want of a better word) and so I wear what I can find that fits :( I do go to the "Walk in Comfort" shoe store in Victoria...

But it doesn't stop me from coveting cute shoes!
Susan

Glad you found comfortable shoes that are cute. When you don't have to "break them in", you know they're good for your feet. I love trendy, stylish shoes but I can't wear them anymore, so I'm glad I can at least find funky casual ones that support my feet.
I'm looking forward to seeing what you do with your big shirt UFO!

You found shoes you could actually walk MILES in without pain right off the shelf???? Is this an April Fool's joke???? Unheard of! I can't even do that with new sneakers! Lucky you!

Great shoes!!! And I think your fleece jacket turned out quite well, you're right about the great collar, and I really like what you are doing with the shirt.