Remember a couple of weeks ago when I made a dozen Artist Trading Cards for a swap at my weavers’ guild? I forgot to show you what I got in exchange! The one on the bottom is mine and I have a couple of them left over. Some of these are real handwoven fabric (the 3 on the right) and some are reproductions of fibre art (the 3 on the left). The centre top one is a cute tiny quilt and the middle one is my favourite: hand-dyed and stamped silk with a collaged piece of handwoven fabric on top. What a nice start to my ATC collection!

At the guild meeting, potluck and schmooze-fest we also had door prizes and I won a book: 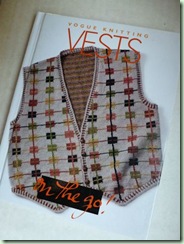 Not a favourite. Because it was published way back in 2001, it’s kind of dated with boxy styles. I doubt I’ll ever make anything out of it which is probably why I don’t already own it. I sadly did NOT win the gift certificate for Sweet Georgia. Oh well. I almost never win anything or if I do, it’s never anything I really wanted to win. Of course I couldn’t complain too much because I was wearing my fabulous scarf that I won in a draw a couple of years ago (along with a whole pile of other lovely items). It was super-finely woven, shibori-tied, dyed and painted by my dear friend Jo Anne. Once in a rare while I do get lucky!

Meanwhile, instead of sewing I spent the entire day yesterday backing up my two computers to my portable terabyte hard drive. I feel better now. I’ve been putting off that little chore but you’d think I would know better. I have already lost 2 computers with all their data, one to a thief and one to a stuck drive. My little netbook is particularly vulnerable and it’s also the computer I use most often. It contains a lot of files I would rather not lose! I do tend to back it up to the big desktop fairly often but then not back that up in turn. This time I’ve saved the lot. <pats herself on the back>

It’s a holiday weekend here in Canada (Victoria Day, aka May Long Weekend) and of course we’re into the second rainy day after several weeks of glorious sunshine. It feels odd to hear the pattering on the roof. Hopefully soon it will clear up and warm up and my garden will take off like gangbusters. If the happy slugs don’t have a huge party in it first! They were kind of scarce while the weather was dry but they were only lurking in the shadows waiting for their opportunity to return. Slimy critters.

You are so industrious! I can't believe what you are able to accomplish in a day. It's very foggy and rainy here today, so I will follow your example and try to get caught up on emails and start some summer sewing projects.