Well I finally finished something! But it wasn’t either of the tops I mentioned in my last post. A different one jumped up to the front of the queue when I was looking through the fabric stash and came upon a narrow piece of crinkle cotton that has been lurking in there for so long that I can’t remember where it came from. All I remember is that it was given to me by someone sometime, probably at least 10 years ago. It was only 16” wide with no selvedges, just torn edges, and just under 3 yards long. The colour is kind of a rusty pink with stripes of thicker threads in navy and brown. I originally thought the navy was black until I looked at it in bright daylight! I obviously liked this fabric enough for it to avoid purging though I couldn’t figure out what to make out of such a narrow width. Finally I had a flash of inspiration! 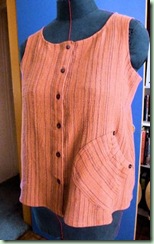 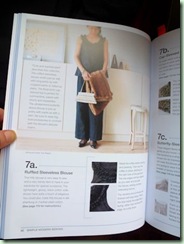 Modifications:  Eliminated the ruffles. Raised the front neckline 1”, added a back seam and button front.

Comments:  Because the fabric was reversible I was able to mirror the asymmetrical stripes by flipping the pattern pieces.  It was difficult to choose a thread to use to sew on this odd colour. The best match was a slightly rusty orange. I only used straight stitches and no serger to put this together. It easily ironed really flat so I was able to make French seams and just double-turn the hems instead of binding them. This stuff frays like crazy so there are no exposed seam allowances anywhere. Unfortunately the fabric stretched out a little while sewing and pressing so I ended up taking in the side seams at the underarm. It’s still a little larger than I want but hopefully it will crinkle back up more when it’s washed next. The puffy pocket with decorative buttons was an improvised addition from the minimal scraps that were left over.

I’m currently wearing my new Rusty Sleeveless Top with a nearly-matching t-shirt underneath and navy capri-length sweat pants. I’m quite happy with it as a layering piece but it’s a little loose for me to feel comfortable with it on its own, at least until it’s gone through the laundry. Too much exposure of bra straps as it shifts around! It was supposed to be a wearable muslin for another version that I still want to make but the stretching issue kind of reduced its usefulness in that regard. Oh well. It didn’t cost anything except my time so I consider that good.

Moving right along, I’m finished planting the garden now. There is no space left for anything else to squeeze in! Finally got the tomatoes tucked into the greenhouse this morning. Then we had to go buy a pot for T-Man’s retirement present, a grafted Cherokee Purple, because we ran out of room in the greenhouse. Anyhow, I want to see how well a tomato plant will do on the deck instead. The soil is sterilized so it shouldn’t get late blight which is why we grow tomatoes under cover here. It’s an indeterminate though which might make staking a very tall plant in a pot kind of interesting! Apparently this variety is very yummy so I’m hoping for good things to come. The plant even has a little garden gnome named Buddy to watch over it so that should help, don’t you think? I’ll have to get a photo of him to show you.

While we were buying the tomato’s pot we also picked up a planter for the railing so I could put the basil and cilantro in a convenient spot. The basil never does very well in the garden or in the greenhouse so I usually end up just growing it in pots and replanting often. Maybe this will finally give me half-decent sized plants? Nothing ventured, nothing gained I suppose.

Ah ha! I see, now! I hadn't taken much note of that top in the book because I'm not a big fan of ruffly trim . . . also it is sort of going camo in the dark linen, behind all the accessories. It looks good the way you made it!

Love your fabric, by the way. To myself I always call that odd color "light red." It's not easy to find.

What a cute top! The stripes really make it sing. And the pocket is just perfect. Great job!