Return Of The Native 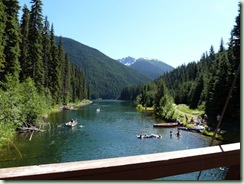 The usual shot of Mt. Frosty from the Rainbow Bridge. Note there’s much less snow than we usually see and a whole lot more people enjoying the water. The weather was hot but the lake was really cold!

So we’re back from our Summer Family Campout. Us, our kids, their spouses, their kids and, on the last weekend, T’s brother and sis-in-law. That was fun! Although I’m covered in itchy bug bites. I think the spots represent every type of biting insect in Manning Park: mosquitoes, noseeums, black flies and deer flies. Yum. Apparently I’m delicious. Who knew?

None of us took many photos unfortunately. We were too busy or too lazy or both simultaneously. The weather couldn’t have been more perfect. A little cloud, a lot of sun, a tiny sprinkle of rain early one morning. Not too hot until the last couple of days. We hiked. We talked. We fished. (OK, not me – but I got to eat trout!) We rowed in our rubber dinghy. We played with grandkids. A lot. We cooked. We sat around the evening campfire. Some people made s’mores. Blech. Somebody burned the popcorn. Darn.

There were exciting events to recount. The dog (golden retriever puppy) managed to get a fish hook in her leg which was extracted without too much fuss by Milady Daughter. Then Ninja Son and his nearly-8-year-old Super Princess accidentally caught an osprey with what was likely the same fish hook. Ospreys are big birds! Silly thing decided the float was food but spit it out but then got hooked in the leg when it tried to fly away. Ninja Son was able to reel it in and hold the bird long enough to extract the hook and let it go again. Whew! I hope it learned its lesson now. I was sorry to miss this and there is no photographic evidence either. We’ll have to take their word. It’s too amazing to not be true.

There was also a bear that got into the campground and ate someone’s lunch that he had left out while taking a trip to the washroom. Doh. Unfortunately it didn’t get lost after they tried to frighten it away with bear bangers. So the poor thing had to be shot. Sad. The next day there were sightings of two more bears in the camp so there was a lot more vigilant enforcement of the clean campsite rules. And more bear bangers that sound like gunshots. These ones were smart enough to leave without incident. Whew.

The last Saturday was the traditional BC Day weekend lantern festival. We didn’t make one but went down to the beach to watch them float out into the lake. 5-year-old Stargazer was somewhat disappointed that his family didn’t make a lantern float too. Instead they were busy fishing which he also enjoys and anyway it’s a lot of work! We know because we did it ourselves. Once. Some people made some really interesting shapes and themes. My favourite was the little woman in a bubble bath with a glass of red wine. The tea light was in the wine glass. Cute.

As we were heading back to camp in the semi-dark, a very confused buck mule deer was coming down in the opposite direction. He didn’t realise the beach was full of humans! Somebody’s dog barked and the poor guy sprang back into the forest. He had an incredible rack of antlers, the most points I’ve ever seen in the park. Very handsome.

Here we all are on one of our shorter walks, going to look for frogs in the pond: 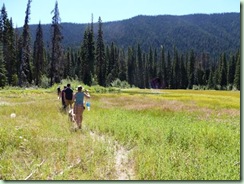 I was pulling up the rear and enjoyed the view with everyone in single file. 8 adults, 3 kids, 1 dog. They’re all there even if you can’t see them. Heh.

The next day we were glad to be heading for home and all the work that needs to be done. Again. We did come home in the middle of the 10 days to water and pick produce and do little people’s laundry and bring back groceries. This time there was even more watering to do since it had been sunnier and hotter while we were gone. I picked all this: 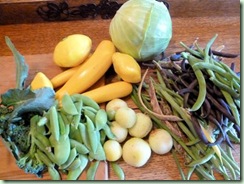 Broccoli, peas, lemon cucumbers, zucchini, pattypans, green onions, 5 kinds of beans and a cabbage. I also picked the dye flowers including all these coreopsis: 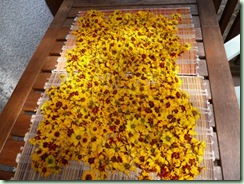 And one weld plant: 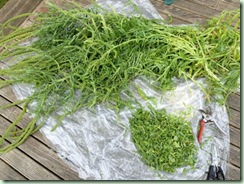 It was huge! I’ve got it nearly all chopped now but there’s 2 more plants left to go. Whew. I don’t really need any more weld but these ones planted themselves and I’m not going to waste them if I can help it. My Spectrum Dye Study Group is coming over tomorrow to use up some of my weld supply for me. I need to clean up the basement dye studio space today in anticipation.

Oh, and I did finish one knitting project while I was away: 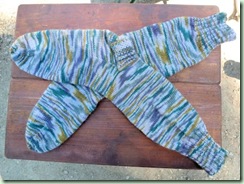 Socks for T-Man. He’s starting wear out some of his dozen or more pairs and needs replacements.

Sounds like a fabulous holiday. Amazing story about the fish hook. And I am envious of your coreopsis - mine is just beginning to bloom.