True confession: I always feel like I don’t accomplish much because everything I do takes lots of time to complete. I have so many projects in my head that only a small percentage of them ever see reality. And it’s not that I don’t enjoy the process of making, however long it takes. Going back and perusing my notebooks filled with FOs really helps when I start to get frustrated that I’m not finishing more-more-MORE. However other people always say I’m really prolific! Guess it all depends on your perspective, hey?

Speaking of FOs, here’s the latest one. It was really easy to finish because apparently I can easily knit plain stockinette in sock yarn and read at the same time. I’m multi-tasking! Yay. 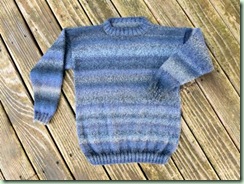 Mods: I left off the buttoned shoulder bands thinking they were too babyish for a 6-year-old. I used dpns for the neck ribbing and finished with my new favourite bind-off, Jeny’s Surprisingly Stretchy Bind-Off.

Comments: This is the third time I’ve made this sweater for my grandson! He loves it and wears it but keeps growing out of it. How does that happen? Since this is the largest size, I’m going to have to find a new favourite for his next sweater. Judging by past history, I have maybe another 2 years to hunt.

I discovered much later that Patons Kroy Socks has less yardage per ball than I’m used to with most sock yarns. It has the same 75/25 wool to nylon ratio and it doesn’t seem much thicker if any at all. Add that to the mystery of why I only used just under 5 balls of yarn, maybe 800 yds total, which is not much more than the size 4 that I made him last time. Go figure. It seems counterintuitive to my meagre little brain.

Anyway, I love knitting with sock yarn especially in stockinette stitch. My hands just go where they’re supposed to and it becomes a totally relaxing experience. Maybe I need to make a sock yarn sweater for me?

So what else? I played with some eco-dyeing. This is definitely the time of year to take advantage of the leaves! First I did a sampler square silk scarf using leaves from my yard and a couple from the purple-leaf plum across the street. I had already mordanted three scarves in alum acetate and this one was just rinsed but still wet. I arranged the leaves in groups on one diagonal half of the square and folded the other half over top before covering with plastic wrap. I wanted to keep the layers in the roll separate so I could really see what colours I could get from each species. Here’s what it looked like after it was all rolled up before steaming: 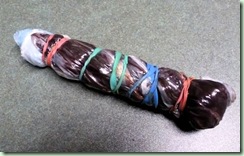 After I steamed it in the colander for an hour I turned off the heat and left it overnight. Very hard to do! I wanted to rip it open right away. The next day I couldn’t stand it anymore so I opened my pressie: 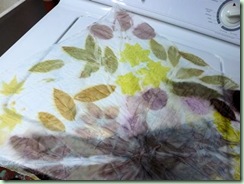 This is a quick-and-dirty photo on top of the washer while the scarf was still wet. Want to see a close-up? 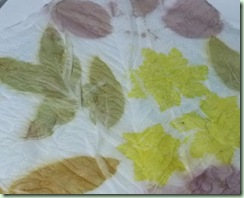 The green leaves are Japanese indigo (unexpected, I know!), the purple ones are smoke bush, the yellow ones are cranesbill geranium, and the brown one is Persian walnut. In the top photo you can also see the Japanese coral bark maple (yellows) on the left and the dark wine colour of the purple-leafed plum on the right. That big blur of purple and burgundy at the bottom is woad. There’s also some blueberry (red-brown), white ash (surprisingly deep wine colour), plus a few you probably can’t see: heuchera “Palace Purple” (pale purple blur), blackberry (very pale beige), American chestnut (even paler beige). It is of course somewhat lighter after it dried but virtually no colour rinsed out. After ironing out the creases, I amused myself by using a fine black permanent pen and writing all the Latin names of the plants next to the leaf prints on the darker half of the scarf. On the lighter half (which had contacted the back sides of the leaves) I wrote the common names. I think it’s kind of neat! A wearable sampler.

So of course I couldn’t leave it alone after that! Yesterday I covered the long narrow silk scarf with woad, purple-leaf plum, “Diablo” nine-bark (one I hadn’t tried yet) and cranesbill geranium. This time I didn’t use any plastic wrap at all. I wanted the colours to mingle and blend. I have yet to unwrap the bundle today. And I still have one more square scarf left.

Louisa, it looks like a damselfly spreading its wings about to take off in the bottom of the 2nd picture! What a spectacular experiment!

Looks great. I know what you mean by the time it takes and all the processes as well as all the ideas pilling up.

What a wonderful thing! I've never seen dyeing done like that. So cunning.

First time I'd heard of this dye technique. Wow! Awesome! Will you show us the finished scarf with the names?

The blotches of woad sure do look like a damselfly or more like a dragonfly actually, don't they? Hah!

Patience my little chickadees. I have more with photos coming.

Love the photo thru the bright reddish orange leaves . . . . and I haven't seen anyone use simple 'leaves on fabric' dyeing before either!! Nice effect though. Too bad the red/orange leaves don't work that way too!!