I just heard the news about Judith MacKenzie losing her teaching studio in a recent fire. How awful! I can’t imagine how I would feel if it were my stuff that had all disappeared in a puff of smoke. Of course in my case it would probably also take my entire house since I don’t have a separate space. Brrrr… I can’t get the thought out of my head.

Looms and wheels and carders and combs are relatively easily replaceable, maybe even with something better than what you had. What I would miss the most would be my library. Eight bookcases full of books, magazines, notebooks, sample swatches etc. all collected over the last 45 years of my crafty life. Most of it is unfortunately not replaceable even if the insurance would stretch to cover it which it likely would not. I don’t want to test it anyway. My fingers would be crossed now but that would make it hard to function.

My heart goes out to poor Judith and I know the community will rally and support her in every way they can. This website has been set up to help. She has an amazing number of friends, students and admirers and I see they’ve already gone a goodly way towards their ultimate donation goal. Unlike trying to help in the aftermath of hurricanes, this is something simple that you can do for someone you know, even if it’s just through her books and videos. 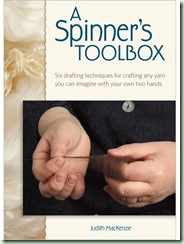 Speaking of which, I just finished watching her Spinner’s Toolbox video (available from Interweave here) and it’s exactly like taking a class with Judith. Except unfortunately she can’t come around to your wheel and help you personally! I remember taking my first workshop with her more than 20 years ago and billeting her at my house. She probably doesn’t recall but I can clearly see her sitting in my kitchen with my first angora bunny Dust Bunny peacefully on her lap.

The Toolbox video demonstrates 6 different drafting methods in detail. Even I, old dog as I might be, learned what I was doing wrong with my worsted join and what I was doing right with my attempts at woollen spinning. I doubt I’ll ever be able to accomplish her “wolf yarn” though Judith sure makes it look easy! I really need “trainer wheels”, a core yarn to spin around, rather than trying to accomplish both the fluffy overlay while spinning the core at the same time. But that’s just me.

I don’t own this copy but borrowed the two-DVD set from my guild library. Great resource and underutilised by members. I know because I’m a library volunteer. (Have I mentioned how much I love books?) I’ve always said that for spinning especially a video is worth more than a thousand words. Wisely folks are making them for us and even posting them for free on YouTube. How I wish something like this existed when I was learning how to spin! Might have saved me from struggling all on my own.