Casting Off and Casting On

Moving right along here, at least with the knitting. The sewing – not so much. I’m hoping to start on the dress this afternoon though. Maybe.

First up here’s my latest FO:

Winter’s Dark Socks For Me 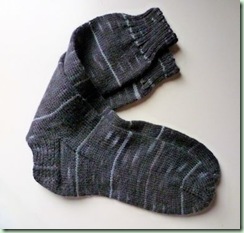 Comments: There were 2 balls left after making T a pair and I’ve never had a nearly-black pair of socks. They work with a lot of my wardrobe. I’ve noticed that I’ve been tending to make the legs longer on my socks recently. They come above my boots better.

Gee, I hope I’m done with knitting in black for the foreseeable future! Most of my knitting happens in the evening dinner after while we’re watching TV. There’s not enough light for dark-coloured yarn and I’ve made quite a few projects like that recently! Instead I decided to use some bright orange-red suri alpaca lace yarn and pink silver-lined seed beads to cast on this: 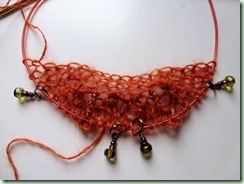 That’s the very beginning of the Aeolian Shawlette by Elizabeth Freeman, from Knitty’s Spring 2009 issue. Unlike the Annis scarf I finished recently, this one is going to be challenge to knit! It includes both beads and nupps and some of the beads go on decrease stitches for extra fun. The stitch patterns are of the always-exciting Estonian variety too. I’m only 4 years late to this party. Over 3500 people have knit it already! Unfortunately this is NOT evening-in-front-of-the-TV knitting so it’ll probably be ongoing for quite awhile.

So for an easier (but dark-coloured!) project I also cast on for Rosa’s Sleeveless Cardi-Jumper by Emma Fassio, a free Ravelry download. Calling it a cardi was obviously an English-as-a-second-language issue because it’s really much more like a tunic. I’m sure Emma added the “Jumper” to it’s name to help avoid a little confusion. Anyway, the style is right up my alley with the pointy hems. (Yes, I still love them!) And since I have to adjust the numbers because my gauge is quite different with a finer yarn, it’s an easy top-down shape to fiddle with. I used some really ancient linen/cotton slub yarn in a dark grey that’s been in my stash forever: 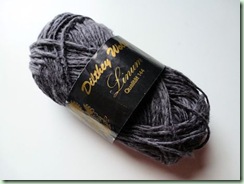 It’s already been knit into several things that didn’t work out so I’m hoping for Third Time’s The Charm with this one. I have lots of yarn so I’ll be deciding whether or not to add sleeves as I go. So far it’s coming out well.

BTW we had a lovely time at Nana’s 85th Birthday party on Sunday! It was a big family turn-out at Reifel Bird Sanctuary and even more showed up for the party itself – 22 in total. Nana had a fabulous time and kept saying that it was the best birthday ever. Thanks to T’s baby brother and his dear wife for organising things, supplying food for both the birds and the people, and to everyone for managing to come on short notice. I have a few pictures but they’re still in the camera. Mostly of birds, it turns out! Typical…

Hah! I'm just going to keep poking you with my pointy hems, Dixie. ;)

Yes yes yes!!!! I'm knitting!! You're right, too. it is absolutely meditative and wonderful. The yarn I got is a beautiful mohair/merino wool/ nylon and the wooden needles are made in Japan and gorgeous. Just the pleasure of the materials alone makes me happy, never mind the process. And yes, I think I will have something to wear when it's all said and done. I love it.

Hope you're well!!! Maybe I'll even join Ravelry one of these days. :-)

Oh do get on Ravelry, Jean! It's such a treasure trove of patterns, techniques and help for any problems you might have. I especially love the ability to see what others have done with a pattern!