I know you’ve all been waiting impatiently to hear how it went. Yes, I won – at least the first battle. Yay! I now have a basic pattern and a finished bra that fits better than any store-bought bra I’ve ever had before and is comfortable. But not without receiving a war wound: 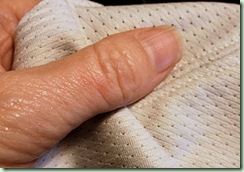 A little nick below the knuckle of my thumb from the rotary cutter. Those beasts are sharp! I only just accidently tapped my skin lightly while cutting out the pattern pieces. Oops. Usually I’m very careful but I guess I got tired.

So, disappointingly none of the Pin-Up Girl pattern sizes would fit at all, even though I have two full ranges to choose from. I ended up having to draft the pattern myself from scratch using the instructions in Beverly Johnson’s second Bra-making Manual and then doing some intensive fitting. Scary stuff! Definitely not for the faint of heart. But I’m really proud of me for sticking to it until I finally got the results I was looking for. In the end it was kind of fun. (Yes, I know I have an odd notion of “fun”!) Here’s what the pattern looks like: 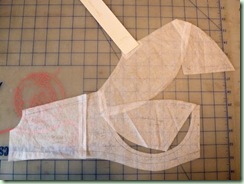 Terrifically exciting, no? OK, it is exciting to me! It has a straight-across seam which is not the most flattering but that can be changed for future versions. You can see the split lower cup which supports much better than one piece and the wide shallow shape. I had to make a couple of muslin versions and that helped a lot to get it right. I seem to recall a lot of picking out of basting stitches…

I used a lot of resources for the final construction but the best sewing details are in the Pin-Up Girls Classic bra pattern from Bra-makers Supply. Materials used were many and varied. The fabric is an ivory polyester sport mesh and I doubled it for the cradle, lower cups and straps. To make it easy I just used Wonder-Under to block-fuse the two layers together before cutting out the pieces. The upper cups are a single layer and the back band is nylon power net. Unfortunately the elastics don’t all match in style or colour and the sliders and rings and hook-and-eye set are all plain white. I don’t really care since nobody will actually see it!

I’m really sorry but for obvious reasons I’m not going to publicly post the photos of the bra on me and it doesn’t fit the non-squishy Debbie Double at all. You’ll have to make do with these rather awful flat pics. Completed bra on the outside: 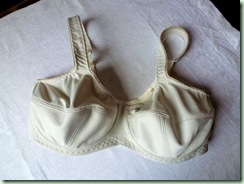 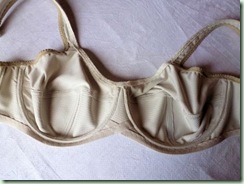 You can see how nicely finished it all is inside. I love the crossed front elastics! This shape fits me so much better than going straight across. Sewing a bra together is really not hard even though there are a lot of steps. It’s great practice in sewing lingerie elastics and topstitching accurately! Obviously sewing several ultimately non-fitting bras last year was good practice. At least I can recycle the hardware off the rejects. And I currently have one other set of wires which I plan to use to make a second bra before I order more supplies from BMS. I eventually want to have at least 5 or 6 new bras.

But first I need a palate cleanser! A rest from all that intensity. So I guess I should just make my Splashy Dress which has been patiently waiting for me to get over my Bra Obsession. But I can’t wait too long before making the second bra so I can really solidify everything I’ve learned in my brain and hands. Also to make sure the first success wasn’t just a fluke!

P.S. Anybody want to buy 2 virtually unused bra patterns from me? Pin-Up Girls Classic bra, pink (sizes 30-38 AAA-D) and yellow (sizes 30-38 E-H), retail $20 Canadian each. One or the other or both. Lots of people have had great success with this pattern right out of the envelope, just not me sadly. The sewing instructions are really clear (especially in the newly-purchased and probably-updated yellow pattern). PM me and we’ll negotiate.

You did it! Hurray! Good for you for sticking it out, even risking life and limb. (Those rotary cutters are deadly weapons, indeed.)
The bra looks great and I'm taking your word for it that it fits well. Hope your next one is also a success!

Well you could always use pieces of fruit to help model your new bras! I can't wait to see your dress in that nice colourful fabric, are you keeping the shaping similar to the pattern picture?

Thanks, my dears. I'm just so pleased with myself that my arm is getting tired slapping myself on the back! LOL!!

And Nancy - remember I need small semi-inflated footballs. Though come to think of it, I saw some papayas at the market today that might have worked...

Congratulations! That must be a great feeling. I like to think that doing all the work in bra fitting kind of helps develop my eye for fitting in other clothes, too...

and ouch, those rotary cutters are killer! (I had a war wound, too--I stepped on a needle while photographing stuff for the sew-along. It was not a pretty sight.)

Oh, Amy! You were my inspiration and general cheerleader. I know I've thanked you a bunch but I literally wouldn't have done it without you!

Watch out for those lurking needles!

Well done. I don't think that this is a project that I will even try.

You are nothing if not persistent!! I'm not surprised you won the Bra War & now have a fitted-to-you bra. Congratulations. Now you can make them in nice fabrics & colors to match the panties & half slips you have to make.

Woohoo! I bow to you on making it through with such success!!! Applaud, applaud. (I am still not going near mine. It's packed away for a good long time.) I'm afraid there's nothing left for you to conquer now.