A Wee Rant And Other Things 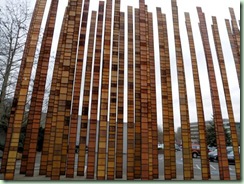 This staggered line of rusty pieced metal forms that sway slightly in the wind that we found at the edge of Seattle Center is both interesting to the eye and softens the view of a parking lot near the EMP Museum. I quite liked it and wish that Vancouver could invest in some better street art than the "poodle-on-a-stick” that was recently erected in my neighbourhood. Blech. What a gigantic waste of money that perhaps could have been used to improve public transit instead of cutting back. I know art is in the eye of the beholder and all. And yes, a little controversy is not a bad thing. But as far as I know, nobody really likes the giant poodle (except perhaps the misguided artist herself and whoever approved this commission) not even our mayor. I won’t post a photo here. If you want to see, just click on the link to the news story above. Or this slightly more positive one. Or this one. The comments are telling.

Mini-rant over. Moving right along. Here’s the FO that I promised: 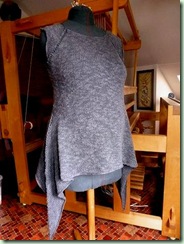 Mods: My gauge is off because my yarn is much finer so I needed to adjust sts & rows. Luckily this simple pattern is easy to fix. I began with 94sts, divided 32/1/13/1/32/1/13/1. Then I worked the increases to 22 rows before binding off for the sleeves. I added 3 st under each arm for a little more room in the bust. Knit straight down until row 67 and then began increases for the hem points, I just kept going with the increases until it was long enough for a tunic length at row 130. This makes really nice long points!

Comments: Swatched with the dark grey linen/cotton yarn from deep stash. It’s at least 20 years old and already been knit into 2 different garments and frogged both times! Third time lucky - a garment I can wear. I love this simple but funky tunic! It blocked out really nice and flat with hardly any rolling on the hems. I’ve already worn it to an event and got several positive comments.

Note that there are still 6 balls left of this yarn! Sigh.

Plus I have another FO to show off today: 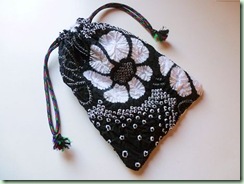 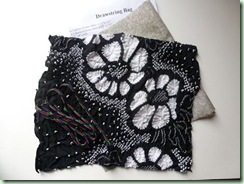 Comments: For once I didn’t sit on this project for a decade! The finished bag is about 5.5” wide x 7.5” long. I didn’t follow the instructions exactly because the piece of shibori was not quite the right size and I didn’t want to trim it. The lining piece was somewhat shorter and wider so I trimmed a piece off to fit the width and after sewing the lining and the bag together I folded down the shibori inside at the top until the lining reached the bottom of the bag. This meant that the slots that I left for the ties were somewhat closer to the top of the bag than I would have preferred and the bag is a little longer proportionally. I think it worked out OK anyway and as a bonus I didn’t lose too much of the floral pattern. I was careful when pressing not to flatten the shibori texture too much. Now to find something to put in it!

Meanwhile I’ve been knitting away on my Orange Aeolian Shawl. So far I’ve done the Set-Up chart, the Yucca chart 6 times, the Transition chart and am partway into the Agave chart. Boy, did that last chart give me trouble! I knit the first row over and over without it coming out correctly. I checked the web for errata or difficulties. Nobody reported anything. I resorted to re-charting the last 2 rows of the transition chart and the first row of the agave chart to see how they corresponded. Looked all right. But I was missing something in the knitting of it. I had extra stitches that wouldn’t resolve. Out with the pattern sheets and…then I caught sight of the Symbol Key. There was my problem. I was reading a thick diagonal line as k2tog instead of k3tog. The same with the opposite slant and ssk instead of sssk. Urp. The symbols were too much alike and I was too tired to see the difference. This Knitty pattern by Elizabeth Freeman is beautifully written with lots of explanation and detail. The mistake was all mine and I paid for it with a lot of frogging and frustration! But I’m over that now and on my way again.

I haven’t started the new Red Blodgie’s Sweater yet but I’m nearly at the toes on both of the Speckled Socks for T-Man. I’ve also block-fused the Bravo Bella bra fabric together with the lining using Wonder-Under. This worked well for me in the ivory sport mesh bra so I’m hoping it takes some of the extreme stretchiness out of this ivory shiny/matte vaguely animal-print fabric. No wonder it’s so hard to make bras that fit when the fabrics are all so completely different! There’s enough here for at least 2 or 3 bras if I can get other elastics and findings for them. We’ll see how it goes after this first one.

BTW, I found out the 30-foot-high rusty installation is called “Grass Blades” by John Fleming (2002). More info (and better photos than mine) here. 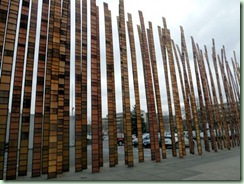 Wow, what a lot of eye candy! I love the grass blades, the poodle, not so much.
Your knitted tunic looks really nice. It must feel good to have used that well-aged yarn. The shibori bag is simply beautiful. I love that piece of shibori, and your bag does it justice!

Thanks so much, Dixie! I think the most important reason that I write this blog is to prove to myself that I actually accomplish more than I think I do. It works too. But it's especially nice to know that there are others who appreciate my efforts!

Love your tunic. There is something about rusted metal that I love.

Thanks, Rosemary! I too love rust but hesitate to use it to pattern fabrics especially since the one time I tried it, it didn't work. So easy only I could screw it up! :(