We’re back! Did you even notice I was gone? We packed up the old VW van and took off south last Wednesday morning. It took a half-hour to get through the border which is kind of average but with no hassles. The weather started out quite nice but clouded over with a splash of rain by the time we got to our first stop, the Safeway in Mt. Vernon for groceries. Then we continued south to Seattle and our second stop: 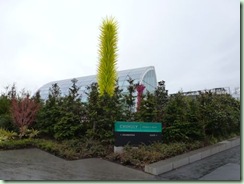 The Chihuly Garden and Glass museum at Seattle Center. It was pretty incredible! Inside are rooms like this: 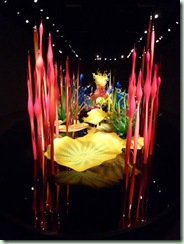 To give you some scale, those “flower stalks” are considerably taller than I am. And outside are gardens like this: 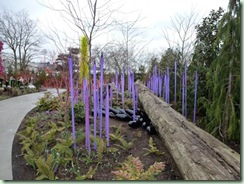 Even the real plants are coordinated in colours with the glass. We were lucky that it stopped raining long enough for us to enjoy this part without getting soaked. 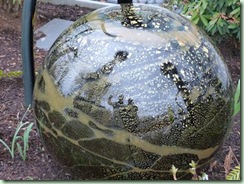 Can you see us in this big glass ball? That’s the reflection of the Space Needle to the left and the big yellow “flower” from my first photo to the right. I really wanted to take all the beautiful balls home but they wouldn’t let me. Darn.

Among the many cool things in Seattle Centre there’s the EMP Museum (formerly the Experience Music Project and the Science Fiction Museum and Hall of Fame). This really unique building was designed by Frank Gehry: 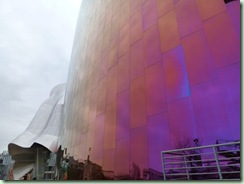 Made of colourful sheet metal it’s a sculpture all by itself and we walked all the way around it for different perspectives. We resisted going in (missing Captain Kirk’s original command chair) and we didn’t take the elevator to the top of the Space Needle either. It started to rain again and we had much farther to go before we called it a day.

So we continued to head south to Tacoma where we hung a left into the countryside towards Puyallup (yes, properly pronounced “pew-AL-up”), a cute little farming town that is most famous for two things: the Puyallup Fair and the Sewing and Stitchery Expo. No need to guess which one I was there to see! We had a reservation and stayed overnight in the area of the fairgrounds set aside for RV camping. It consisted of a pot-holed gravel driveway with soggy grass and mud areas to park on, no washroom amenities, but with the blessed luxury of a plug-in for our little heater. It rained buckets that night too so we were glad of the power to dry us out in the morning.

Thursday we headed over to park closer to the main entry for the sewing show. I didn’t go to any of the seminars but ended up dragging poor T-Man all around every single booth in two packed buildings! After 4 hours it all became one big blur: 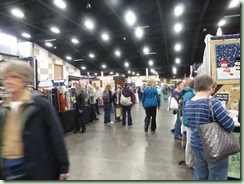 And apparently Thursday is the quiet day! I didn’t end up buying much. I think it was a lesson in “enough” – as in “I have enough stuff to keep me busy making things for a good long time without buying anything else!” I did get a few items and I’ll say more about them in the next post. Suffice it to say that I got out of there for less than $100. Amazing I know. Sadly I managed to miss the Tilton fashion show because I couldn’t find out where it was being held and there was no information in the show guide. However I did see Marcy and quite a few of the garments in person in their booth later. She was busy so I just ogled the yummy fabrics but didn’t buy anything there.

However I did buy a little piece of Japanese shibori fabric from these lovely people: 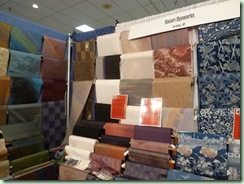 Kasuri Dyeworks from Wyoming. I spent quite a while discussing stencil cutting (they had some lovely traditional ones but way out of my price range), kasuri, shibori, weaving, and indigo dyeing. I think they were fascinated that I not only knew the techniques used in the kimono yardages they carried but had actually experienced them myself. Hey, if it has anything to do with textiles, I’ve tried it! At least once.

After we escaped the sewing show and had lunch in the van, we headed north again up to the Mukilteo ferry over to Whidbey Island. We amazingly managed to snag the last campsite with electric power at Fort Casey, save for the handicapped site. It was pretty windy the whole 3 days we stayed there and we raised and lowered the pop-top on the van constantly. The gusts made the canvas “fwoomph” rather loudly and annoyingly! The nice thing about Fort Casey is that we could easily hop the Keystone Ferry over to Port Townsend, so on Friday that’s what we did. We spent a couple of hours there and had lunch. I also bought some cute new shoes at the Clothes Horse. I don’t have a photo yet so details later.

We had fun on the ferry on the way back. People leave puzzles on some of the tables to amuse the passengers so we worked on a rather difficult one for the whole half-hour or so of the trip back to Whidbey Is. Of course we didn’t get anywhere near to finishing it! Not even the lacy border. The wind and waves right at the mouth of the Keystone dock continued to give the ferry a bit of a wild ride in on Saturday and Sunday as well. Here’s the Kennewick on her way out: 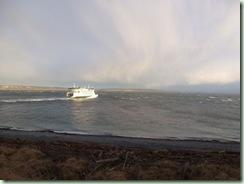 You can’t tell but the wind was blowing hard enough up on the bluff for us to lean on it! Anyway it was nice to see the sun after it rained most of the day on Saturday and even though it was still shining on Sunday we decided to head home. We were out of tank water, books, food and ice and both of us needed a hot shower badly! So we took the scenic tour home by way of La Conner and then the Farm to Market Road through the picturesque little towns of Edison and Bow and on to the curvy Chuckanut Drive into Bellingham. The border was pretty quiet and it only took 15 minutes to get through. And here we are – home again.

For a camping trip in winter we had a really enjoyable time!

What a fun trip! I'm jealous, as there's no way anyone is camping in the northeast these cold, wintry days. At least, no one in their right minds.
The expo at Puyallup sounds like a lot of fun. And a lot of temptation. It's sort of on my bucket list.
Glad you're home safe!

What a lovely little trip!

I love Chilhuly glass and you went to Sewing expo as well. It sounds like a lovely time.