Yeesh! It’s been awhile, huh? I got bogged down in sorting out photographs and preparing my slides for my guild talk next Thursday. It took days. I still have to dig out some fibres, yarns and finished pieces as examples. Then hopefully I’ll finally be ready to blather on about Backyard Dyes.

I’ve also been transplanting teensy little plants into bigger pots. Of course the minute I ran out of room under the lights in the basement, it got too cold outside to leave the extra flats in the greenhouse overnight. So it’s back to the Daily Schlep (in.out.in.out) that happens every spring. It was actually sleeting on me yesterday evening when I brought them in. That’s the chilliest it’s been in weeks! I could see my breath out there. Timing is everything, no?

So what else? I’ve been beavering away on my vest. Here’s the photo of Marcy Tilton’s jacket V8709 from Vogue Patterns: 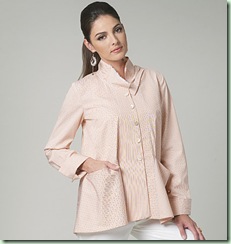 I own several of her patterns but this is actually the first one I’ve tried to make. My changes were to make it 3” longer and to leave off the sleeves. I moved the bust darts down an inch but they are still somewhat north of where they should be. (What’s with that anyway?) I did not alter the shoulders on the pattern but I definitely should have. See how gappy they are: 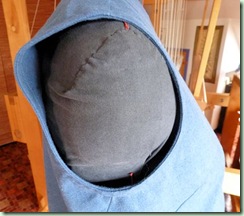 This second photo shows the drag lines on the back: 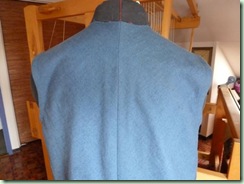 I spent an hour picking out the binding’s stitches, taking a 1/2” more out of the shoulder seam (tapering to nothing at the neck edge) and re-stitching the bias binding back on. I also used some of my new bias iron-on stabiliser tape underneath. The results are improved but sadly not perfect, especially on my more-sloping right shoulder which is obvious on Debbie Double. Oh well. It’ll do. I was getting spoiled for finally having shoulders that fit me though.

None of the reviews for this pattern mention how complex it really is to sew! The peplum and the bottom of the bodice don’t line up exactly which makes it tricksy, particularly at the edges of the pockets. Of course all my careful markings wore off before I got to that point. I should have used Marcy’s advice and used dressmaker’s carbon instead of chalk and wax crayon markers. Next time. Anyhoo, I fiddled for quite some time before it came together but it finally did. Next I have to sew the collar pieces. Here’s a close-up from Vogue: 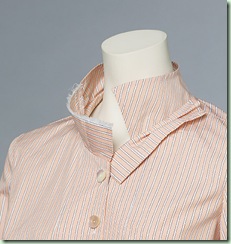 There are 4 different pieces with tucks and gathers and then patchworked together. Coming up with these things spontaneously is one thing but trying to follow it exactly is hard! I’m needing to create a fringe for that one piece because my selvedge isn’t attractive. And I’m not sure this linen/cotton blend fabric has enough body to stand on its own so I have to make the inside look good too. Perhaps I should have gone for the simpler doubled collar but I like this funky one. We’ll see. I don’t have any more fabric to try again so I’ll have to make it work.

Unfortunately I only have 4 buttons but they are nice tagua nut ones that I dyed in an indigo vat years ago so very special to me. The fabric itself is somewhat darker than the pics show but I can’t get it to photograph like real life. Nearly done.

Guess I should be getting a move on here. As always, more anon.

we're doing the same things - I give my Japanese workshop presentation to the Victoria next week. I've reduced 2000 images to 125 (it has taken hours) and I'm moving the indigo seedlings in and out. hailing here today, yuck!!

Ooh, wish I could be there at your talk and you could be at mine, Jean! We could compare notes. ;)