It’s dumping rain on and off today and I’m also feeling under the weather. I think the Littlest Grandbeastie shared her sniffles with me. Boo. After playing with her on Thursday I came down with a sore throat on Sunday morning. Sounds about right for the incubation period. Didn’t help that I spent Saturday at the Celebration of Life for yet another member of my Spectrum Study Group. That’s 2 gone out of 8 in a very short time. Is it something in the water? (Sorry. I’m prone to gallows humour at times.) If I sound a bit bleh, it’s because that’s just how I feel.

So instead I’ve been sewing Marcy Tilton’s V8876 dress, View A with the button front and cap sleeves, in my hand-dyed rayon/linen and I think it’s going to be a very interesting garment. I started with a size 12 and morphed to a 14 between the underarm and waist. Good thing I never go by the measurements on the envelope or this thing would be huge! It took ages to figure out what other fitting changes to make to this so-called Easy pattern. (Vogue, give your heads a shake! Not. Easy. At. All.) As always the shoulders were way too wide and the armholes too deep, even after adjusting for my sloping shoulders by 3/8”. I took about 5/8” out of the shoulder width and added 1/2” of height to the armscye under the arm at the side seam which brings it to a hopefully more acceptable size. I hate gapping armholes. I’m still trying to decide whether it’s easier or harder to adjust with so many pieces to deal with! Gives me lots of seams to consider.

The natural beige fabric had been scrunch-dyed in a bucket so the patterning and colours varied a lot from side to side and one end to the other. I only used black Procion MX and got various shades of charcoal, navy, grey and blue. I’m calling it Stormy! I cut the pattern out without paying much attention to where colours and shapes ended up but then spent ages sorting the various pieces for a more-or-less balanced look. The fabric is the same plain weave on both sides (it was a white rayon warp with natural linen weft before I dyed it) and I was able to flip and turn the pieces several different ways. Then I marked the top side of each one with a fabric crayon so I wouldn’t get mixed up. Oops. I meant to take a photo but forgot in my hurry to get to the sewing!

Other changes to the pattern included interfacing the front pieces where the buttonholes and buttons will go. It’s a wee bit stiffer than I’d like but without the interfacing this fabric is rather drapey and I thought that stabilizing would be helpful. I also doubled the front yokes as for the back. Why not finish it nicely? They’re only tiny pieces of fabric. Lots of people have sewn the yoke with the burrito method and I can still do that while including the front yokes. I also started following the instructions for basting the centre front pieces together with their facings and then treating them as one to attach to the middle front section but now I have to pick it out. I decided to fold the facing seam allowance under and slip-stitch it to finish that edge off better. I figure if I have to slip-stitch the hem facing on anyway, why not do this part too? I don’t mind. Sewing is no fun if it’s rushed.

Besides, sewing a garment is not nearly as time-consuming as knitting one! I finally have my latest sweater to show you: 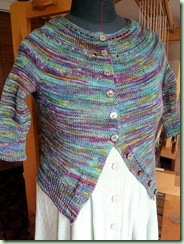 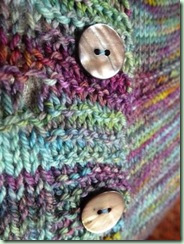 Mods:  Used larger needles than pattern and increased a couple more times at each side of the yoke before dividing for the sleeves and body. CO 17 sts under each arm.

Comments:  Trying again! This version uses 1/1 ribbing which I started later on the bottom. I used 3.5 mm dpns for the sleeve ribbing and knit until I had just enough yarn left to bind off. This resulted in sleeves that are just a little shorter than the ones on my yellow sweater. I only had a very limited amount of yarn but ended up with quite a wearable sweater. It goes with quite a few things in my wardrobe but I have to watch the sleeves because the cardi’s sleeves are quite snug. Best over a sleeveless layer.

I have now used up all the Newton’s Yarn Country skeins that I bought in Spokane 4 years ago at ANWG (Association of Northwest Weavers’ Guilds biennial conference). Hopefully I can get some more next month at this year’s ANWG in Bellingham, WA. I made an awful lot of projects with this stuff - out of my last 4 skeins I got ten garments and accessories! I like that it comes in very large variable-weight skeins, usually nearly a pound each. I also like that it is much more irregularly dyed than usual for a commercial yarn, more like hand-painted and in shorter blips of colour that don’t really pool much. Sock yarn is one of the few yarns I can justify purchasing for the stash. I actually use it up.