Sewing For The Man

Hope you aren’t tired of my T-Man yet because there’s more of him in this post! (Does that sound odd somehow?) Anyway, I finished his cardigan: 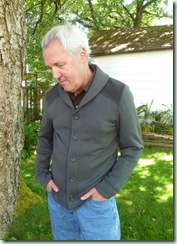 Fabric:  Soft fleece knit (one fuzzy side and one smooth knit side), unknown synthetic, dark gray, 56” wide, 2.4m. (Could probably have gotten it out of 2m or a smidgen more. There were leftovers but not big enough for anything else.) Very stretchy in both directions. Fusible knit interfacing. 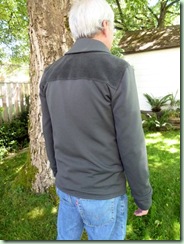 Mods:  We chose the narrower collar version and the decorative yokes from self-fabric fuzzy-side-out. (They’re really the exact same colour but look darker because of the pile surface.) I took out the waist curve and chopped 2” off the sleeves before adding the cuffs. I interfaced the facing pieces, the front plackets and the upper and lower collars. I didn’t interface the yokes or the cuffs – but probably should have, at least on the cuffs.

Comments:  This jacket fits quite closely! I was glad I gave it a few inches extra at the waist since T’s waist measurement brings him up to the next size and it has to fit over all the extra stuff like belt, wallet, cell phone etc. There were a couple of anomalies in the pattern where the instructions didn’t quite match the reality: the placket pieces are missing from the interfacing layout and the instructions for sewing the placket says that it is shorter than the body piece but it isn’t. Nothing a reasonably experienced sewer can’t handle.

The interfacing stuck fine to the fleece but the results are quite thick. I was very careful to grade the seam allowances closely and I made good use of my wavy blade rotary cutter for much of the trimming. The neckline seam particularly consists of 5 layers of fleece and 3 layers of interfacing!

The fabric was really spongy so accurate stitching was difficult, especially topstitching. Lots of pins helped, even though I sewed over a few and bent one badly! I used a 1.5 differential feed on my serger and went to a 2 on the hem to prevent stretching. When I was sewing the buttonholes I used my regular presser foot so I could make use of the walking foot to prevent distortion. I was glad I made a couple of test buttonholes first so I could adjust things for the best look. The buttons were very thick and just barely fit under the presser foot. Otherwise I would have had to sew them by hand.

I was pleasantly surprised with how the instructions have you fasten the facings at the shoulder seams and the plackets. It stays in place pretty well though I'm thinking I might hand-tack the facings down to the yoke seam as well. As the instructions suggest I did make a cute little tag and stitched it right through the back which really helps to hold the neck facing in. Otherwise it would be annoying for sure.

T really likes his new jacket and says it’s very stylin’! Of course now he probably won’t have much use out of it until it gets cooler again but oh well. Now he wants me to make him more things to wear.

I’m kind of at a loss as to what to sew next. Not like there aren’t several dozen options! For starters, I just got a package from Bra Makers Supply so I finally have all the bits and bobs for my tankini swim suit. This is the Pin-Up Girls Princess Tankini from BMS and has a built in bra. I got the swim cups and the clicker for the back in this shipment, plus some more bra-making supplies for later. No point in only ordering a little when a lot will still fit in the package, right?Naturally I have to make the pattern fit me first! Sigh. I’m a little disappointed in the pattern instructions included. It’s not very detailed and it’s almost like they are trying to encourage you to take a class. Too bad I live several thousand kilometres away, huh? Hopefully I now have enough experience sewing elastics and such to bumble through. The tankini will be brown and I think I’ll go for the bike shorts type bottom. I know. It’s a first effort sonevermind. Besides, I like brown. Think dark chocolate. Yum.

However, first I would like something simple and quick to sew. Do I have anything that doesn’t need pattern adjusting first. No? Sigh again.

Meanwhile I’m knitting on a pair of ankle socks which are giving me fits.The Crystal Palace Panda Cotton Print yarn is soooo splitty! The pattern is fine but of course I had to go down in needle size but up in pattern size to get the tight fabric I like for socks. I actually used a 1.5mm metal needle set (Boye) to knit the cuff and ribbing. That’s teensy. So teensy that I bent a couple of the needles a little. Oops. Shows how stressed out I was, huh? Now I’m back to 2mm bamboo and plain knit so it’s going better. I made the plain area below the cuff shorter than the pattern called for because I want really short socks to wear in my shoes. I’ve now done the heel (I did an Eye of Partridge stitch) and am on the gussets. I think I need several pairs of short socks but even though these are cute, I doubt I’ll make another pair with this pattern. Or maybe it’s just my yarn choice? Apparently the Panda holds up well and is comfortable to wear (bamboo, cotton and elastic nylon) so in the end it’s probably worth the annoying knitting. No idea where I can get more of this stuff anyhow.

Hey, maybe I need to knit short socks toe-up? That would be a challenge for me. Not that I haven’t done it before but I have to actually follow a pattern because I don’t have it memorised like I do regular top-down plain socks. Must investigate this. More anon.

What a great cardigan for a man! Your changes to the collar size sound like a good idea - sometimes too large a collar can be way out of proportion. And I love how you used the wrong side of the fabric as a feature. Off to have a peek around your blog...J

Good job! I showed it to James and he liked it too, so maybe I will make him one. After the tux is finished of course.

It's a good thing Joey doesn't follow my blog a lot or look at other blogs. If he saw this I'd be in BIG trouble!! I barely have enough time to sew for myself!! :-) This jacket is so, so cool, as is the cigar box instrument. Two fabulous works of art. I love it.

I looked at the photos of your stormy weather dress and it's soooo lovely. The back is fabulous and the hand-finishing makes it a joy to wear, I'm sure.

Also, I totally understand what you wrote about body types and sewing. Without going into too much detail, let's just say I'm a petite XL on top (no waist and super short torso) with no backside or real hips. Pants fall off (hence lots of skirts), and sleeves and pant legs are always inches too short. So what do I do? I sew and upcycle. It works, right?

Thanks so much for your kind words, Jean! I'm thinking there isn't anybody out there who has no problems with their body - even when they are totally beautiful. Why is that? Anyway, you obviously are the one to whom I should be donating the inches that I have to cut off my sleeves and pant hems, right? ;)

Absolutely. I'm sure I could put those scraps of fabric to use, especially if they're of the hand dyed variety.

Thanks, Susan! He's getting a lot of wear out of his new jacket so far.