Today wasn’t exactly misspent – even if it did include a migraine on my part. Again. Blech. T-Man and I each had an appointment with our lovely dental hygienist Viktorya. So add up the walking both ways to the dentist’s office and lunch in the mall immediately after (because we were starving) and a quick grocery run on the way home, it took nearly 5 hours in total. So much for doing anything else today. I’m spending the rest of this very warm day nursing my headache in a breezy bedroom. And typing this post. If it sounds wackier than usual, you’ll forgive me, no?

On the walk I tested out one pair of my new apricot sleep shorts (unblogged as yet) for chub-rub protectors under my Stormy Dress. They were very comfortable but a tad loose in the elastic waist. I thought it was much tighter when I stitched it but elastic always seems to stretch out on me. I’d rather it didn’t dig in while I’m sleeping but I also don’t want the things falling down on me when walking. A fine line truly. I don’t think I’m going to take the elastic in, at least until I see how it is after laundering a time or two.

I also tested my first pair of Toe-Up Shorties socks in my gray shoes. They were just fine and didn’t slip down at the heel at all. Excellent! I thought I might have to slip in some elastic thread on the cuff but they are good. Next I need to walk-test the second pair of short toe-ups: 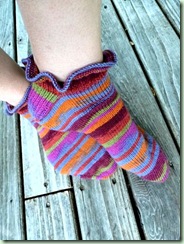 Mods: This time I tried knitting the m1’s on the toe one stitch further inward to make the toe box deeper so they are more like my top-downs. (Top of foot: k2, m1l, k to last 2 sts, m1r, k2. Repeat for Sole of foot.) I knit the rest the same as for the first shortie pair but with one or two less mistakes! Then I finished with a ruffled cuff: 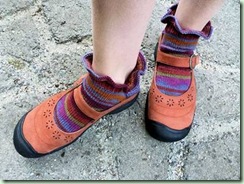 Comments: I’m still having trouble following this pattern unless I pay close attention and count a lot. There aren’t any “landmarks” the way my top-downs have. Or else I’m not recognising them yet. I do like the toe mods that I tried this time, experimenting with the shape. This pair is a wee bit loose on me, even looser than the first pair for some reason. I maybe should only go to 5.5” on the foot before beginning the gusset. They are very cute though and look adorable in my orange Keens!

I still have 2 more pair of stretch shorts to sew from the scrunch-dyed fabric I showed the other day. I’m not sure how much more sewing I’m going to get done before we leave. Que sera, sera.

In the garden, I was totally wrong about the woad seeds not being mature. They were definitely already dry and ready to save. I just hope all the ones I dropped while pulling out the plants don’t decide to sprout everywhere! I already have a plethora of baby welds that I don’t need as it is. I also pulled out the garlic and am curing it on the deck before putting it in storage. I’ll probably have to bring them in the basement for them to finish curing before we leave. It was a little early to harvest them but I was trying for the best balance point between rust damage and curing time available. The plants suffered quite a lot of rust disease this year but it was late in coming on so the garlic heads are fine and big. Interestingly my walking onions don’t suffer from this ugly fungus but the leeks do. I didn’t grow any leeks this time however.

We have been spending some quality time planning our route to the East Coast. So far we’ve gotten 3 weeks of itinerary done and we’re only at Toronto. There’s still a long way to go to Nova Scotia! And then we have to come back again somehow, even if we take the “shorter” route through the US. We can take more time if we want to but then we’re into October and much more iffy weather. Park campsites and other amenities can be limited or closed. And truthfully I don’t know how long I can stand to be away from home. My roots are really deep in my own soil and they will be pretty stretched out after 2 months on the road! Living in a mobile shoebox is fun for awhile but it can get kind of onerous if the weather is crappy and everything is damp and grubby. This will be the absolute longest I have ever been away. But I’m determined to see as much of my own country as I can before I get too old to care anymore. Wish me luck!

Wow! I don't know where to begin. That is one major expedition you have got planned there sister! Good luck for now and I'll send more at regular intervals along the way! In any case, if you wear those shoes and socks on the trip you will be guaranteed to have fun. Very, very cute!

love the socks and shoes! I have a few balls of this yarn, courtesy of Dressew , you and I have cleaned up the store me think hahaha . Our garlic was rusty as well , pulled it yesterday. That should be a great trip, we did the same 32 years ago when you came to BC, took us 3 months with 2 kids and a half.Only one way though. keep us posted, please.

Wow... we get ultra busy with the kids and you guys go and plan a mega road trip. Have fun. :)