The prairie weather has been cool and cloudy alternating with warm and sunny. We’ve had at least a sprinkle of rain nearly every day so things are still pretty damp. We drove across half of Saskatchewan and now here we are in Manitoba, province number 4. In Riding Mountain Provincial Park there’s another one of those cute little towns on Clear Lake called Wasagaming. (I think it’s pronounced something like “wass-AH-ga-min”.) We got a nice campsite in the big (over 600 campsites!) at the edge of town. We were too tired to go further into this big park after the long drive. We did manage a walk along the lake and a look at the little shops. There’s even a movie theatre built in the 1930’s in the classic national park log style.

So many different birds here and we’ve been amusing ourselves with trying to identify exactly which warbler or flycatcher we’re looking at using our ancient Audubon book. No google out here! Darn.

After a night in Wasagaming and after stocking up on ice and a few groceries we ventured west to Audy Lake. On the road we saw lots of deer and a moose that disappeared into the undergrowth almost immediately. The alder, cottonwood and aspen forest seems quite different to us. The only conifers seem to be mainly spruces.

Near the lake you have to drive through a bison enclosure to get to the campground. It’s an area of original fescue and wildflower prairie and it’s really quite lovely in its diversity of plants. 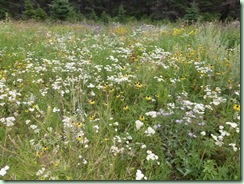 So different from the wheat and canola fields we passed on the way. We finally caught up to the bison on the road right near the Texas gate that keeps them in while letting cars drive through. Up close and personal again and this time with only our van between us, not a big chain fence! 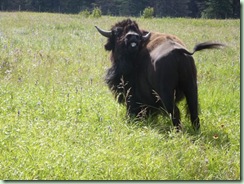 Hey, that bison is sticking his tongue out at me! We got a lovely open campsite right on the lake with its loons and white pelicans for two nights. 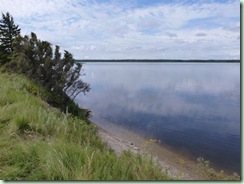 It’s very nice to stay in one spot for more than a few hours. The only thing that would improve it would be for folks to quite lighting campfires and then rowing out on the lake instead. Grump-grump. I hate the smoke and we almost never have one unless camping with family. It seems unnecessary if you aren’t going to cook over it or keep yourself warm. So uncomfortable breathing other people’s fires. Bleh.

We started to walk out to the park entry to pay for our site but ran into a couple of baby black bears. Deciding that retreat was the better idea we drove instead and saw mama bear and another cub on the way. The babies are very cute and the first two climbed a tree when people were nearby. 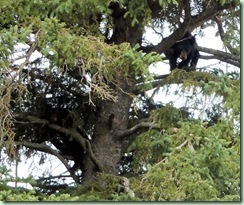 There’s one on the left which is hard to see and the other above on the right. Yes, I took these photos from inside the van! How did you guess?

Later we found a trail along the bison fence (in the opposite direction from the bears) and followed it for a couple of kilometres. The mosquitoes were pretty awful though so we didn’t get to anywhere interesting. It was more a walk on a grassy tunnel in the mainly hardwood forest. The breeze helps keep the bugs at bay back at camp though I’m getting really good use out of the bug net I made for the doorway.

The second day we walked in the opposite direction to the other end of the lake. Saw terns and seagulls, redwing blackbirds and goldfinches, frogs and salamanders. We finally broke down and used bug spray. You know it’s bad when I use that stuff!

Listening to the loons laughing on the lake I’ve been pondering the true story of Grey Owl, whose works I read when I was a kid. He lived in a cabin in what is now part of Riding Mountain and there’s a trail to it. It’s sadly farther than I can walk or I would be tempted to go there. However I’m gaining a little better understanding of the land he loved so much even as I admire the skills and strength that it must have taken to live so far from civilisation – the civilisation that he really didn’t think much of. Sometimes I quite agree.

We’re off to a new place today, just past Winnipeg. On the way out of the park we saw the moose again and a wolf to add to our wildlife collection. I will try posting in shorter chunks since the last one took forever to upload. We’re currently in a Timmy’s in Portage la Prairie. (That’s a Tim Horton’s for my non-Canadian readers. Good suggestion, monnibo.) It’ll be a couple of days more before I can post again. Probably we’ll be in Ontario by then. We are having lots of fun!