We had our coldest night in years last night. I know – as compared to some places it doesn’t really count as particularly cold but –8C is very chilly for Vancouver. Especially this early in the season. And there was a wind-chill factor on top of that. The water garden, which we never got around to putting away, is frozen an inch deep or so, with a little open area where the pumped water hits: 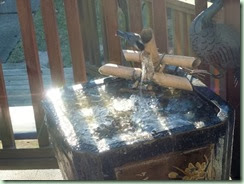 I took this pic through the window in the kitchen door so as not to disturb the little chickadee who was finding it a useful source of water when everything else is solid. Also note the broken spigot thanks to the raccoons – again! They left their footprints all over the porch this morning as evidence of their mischief. I guess the critters are happy we didn’t take the water garden down. Even if T will probably have to build a new spigot again next year. I’ve lost count how many he’s made and every one is different. At least he removed the rest of the glass bubbles (the ones the raccoons haven’t broken yet) before they froze. The plants that were in there are toast but they never last through frost anyhow.

As well, we’ve been covering the rosemary that I moved into the greenhouse with a blanket at night in an attempt to keep it from expiring. There are so many flower buds and I was hoping to get another year with gorgeous blue blooms like last year’s which were spectacular. At least the temp in the greenhouse gets up to a reasonable 15C or so in the sunshine during the day. But it’s the big dips at night that are so hard on rosemary. They can’t take anything lower than –10C and it was pretty close to that last night. It’s a tossup whether the big ceramic pot I’ve planted it in is an advantage in that I can move it into the (unheated) greenhouse in winter or a disadvantage in that the roots aren’t as protected from cold as they would be deep in the garden soil. It all depends on the weather, doesn’t it? And you never know. Guess we’ll find out later what else we might have lost to freezing.

So anyway, I have another Finished Object today. And lots of photos. Interestingly only one actually comes close to the real colour of the fabric and the rest are all different. A side effect of the light (or lack of it) this time of year. At least it allows you to see the details on an otherwise very dark garment. 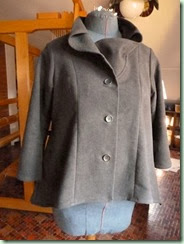 Comments:  For once I went with a careful with-nap layout when cutting out. I sewed this pretty much as directed except the pockets were stitched the way I usually do them with a 3/8” seam. This puts the fold away from the seam which is then inside out of view and it didn’t need any tack stitching to hold it. I also tucked the bottom of the pocket into the hem to keep it from shifting and poking out. One PR reviewer said that the pocket bags were too long anyway but when I lengthened the body they fit properly.

I had never used this inserted weft interfacing before and I quite like it. It seems very soft but definitely gives just a little body and a lot of stabilization to the jacket fronts without being at all stiff. Good choice.

This thick fabric was very prone to fraying: 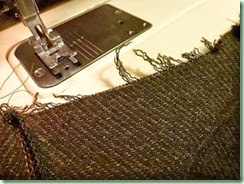 (BTW this is the closest to the real colour!) I tried a 4-thread overlock with brown threads in the 2 needles and black wooly nylon in the loopers (because I didn’t have brown). It made a lovely smooth seam finish: 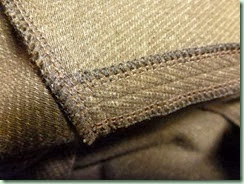 No chance of any further fraying now.

I’m really happy with my new jacket. I love the wavy hem: 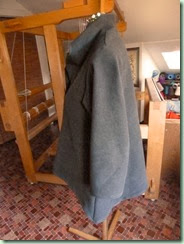 Shorter in front, longer in back, and gentle points at the sides. (Don’t tell me if they’ve gone out of style. I adore them anyhow.) I also love the Usual Tilton Sisters’ Creative Collar: 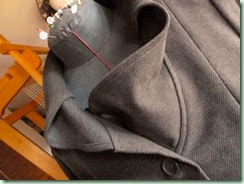 Note that there’s an error in the stitching directions for the collar. They tell you to use a gathering stitch to draw in a curved hem but instead it needs a little clipping to lie flat. They got their innies and outies mixed up!

Another long-unused skill had me making actual corded buttonholes. I’m kind of dissatisfied with the results but my machine has only semi-automatic buttonholes (not at all like newer machines) and I can’t get the tension quite right. They are passable, just don’t look too closely. The old wooden buttons have been waiting in my stash for decades for just the right project. This was it. Done.

On to the next thing!

In knitting news, I’ve worn my slinky navy silk knitted tunic from the last post and gotten lots of compliments. Success. I’m finally up to the heel flaps on the Retro Rib Socks. Halfway there. I was knitting in good light while watching Tom Knisely’s Loom Owner’s Companion video from my guild library. (Lots of excellent hints and tips but nothing really new for an old hand like me.) I love knitting during how-to videos because you don’t need to look at the screen constantly. Otherwise I can’t stand how-to videos at all! I keep wanting to fast-forward to the good bits and skip most of it. I can’t touch the controls if my hands are busy knitting so I semi-watch the whole thing. Works for me anyhow. Heh.

I also broke down and started another pair of plain gray socks for T who’s drawer-full of hand knit socks are mostly getting a little threadbare. This particular yarn was mostly chosen because I had it already wound into two balls ready to go. This one is my mindless TV project for now. And I haven’t even looked at my poor languishing Autumn Echo Flower Shawl recently. Poor neglected dear. Not to worry. I’ll get to it eventually. I’ve promised myself I can’t start another shawl without finishing this one first. And I have red yarn that’s calling me for another shawl that I can’t start yet. Dilemma, yes? I’m so mean to me.