It Comes; It Goes

Well we didn’t exactly endure Snowmageddon but 3 days straight of nothing but snow-snow-snow is pretty unusual for our mild maritime climate. The weird thing was the temperature continued to hover around 3C the whole time so accumulations didn’t mount up the way they would have if it had been below freezing. It kept melting out underneath. When it stopped snowing and warmed up even more yesterday it began to melt in earnest and today, now that the overnight fog is burned off, we are seeing large patches of green grass again. Guess that was Winter, huh? Hopefully! I’m planning to start my seedlings in my “grow-op” very soon and they’ll be needing a garden to put them in when they’re ready.

Meanwhile, I’ve been quite productive in the studio. I have 2 finished tops and one more well in progress. Please forgive the photo quality. In my defence it was snowing at the time and rather dingy in my studio! The colour of the single-knit cotton/lycra jersey fabric is much darker than the photos show – more nearly black. Here’s Charcoal Top The First: 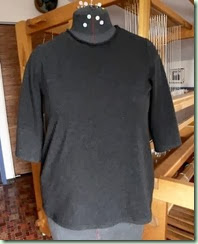 This is my latest self-drafted TNT-Shirt Pattern with 3/4 length sleeves. I think it looks somewhat better on me than on Debbie since I actually have arms! Though it does fit her quite well otherwise. I had fun with the neckline binding and used the extremely tightly rolling selvedge: 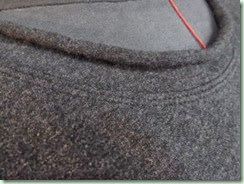 It was a bit tricksy to apply in order to keep the roll happening at the seam. I had to stitch it on the outside: 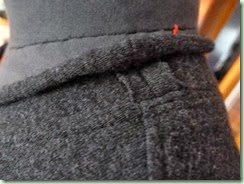 I lined up the seam at the left shoulder for a slightly jaunty asymmetry. Or not. It doesn’t really show all that much. Anyway that’s it for this first quite basic layering piece.

Next for Charcoal Top The Second, I sewed my fit-adjusted version of MariaDenmark’s free Kirsten Kimono Tee pattern: 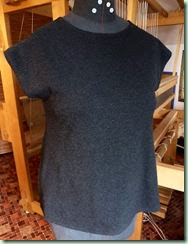 This one is super-simple, only 2 pattern pieces. Using a hint from Sandra Betzina, I made good use of my stash of 1/4” Steam-A-Seam II on the ever-rolling hems: 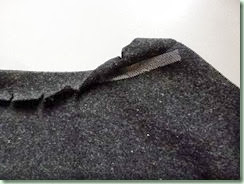 BTW this photo is the closest to the real colour of the fabric. The clips were necessary on the front neck curve to get the hem to lie flat. Those bits were mostly trimmed off after stitching. Steam-A-Seam II is tacky on both sides and sticks the hems down fairly well. After you get it in place you iron it for 10 seconds and it becomes permanently stuck. For extra security I also twin-needle stitched over the hems using woolly nylon thread in the bobbin for extra stretch: 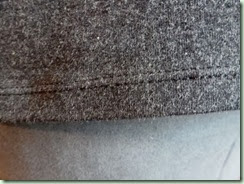 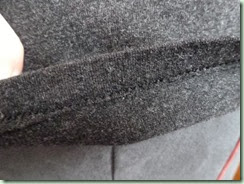 They came out very nice indeed! Flush with two successes I started in on Charcoal Top The Third. This one isn’t finished yet so you’ll just get a teaser this time! Obviously I’ve been absorbing some online lessons and inspirations because I went all artsy and Tilton-esque on the neck and armhole binding: 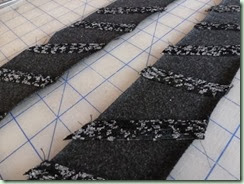 Those are narrow strips of slinky knit in a fascinating black and gray design that were left over from sewing my well-loved pop-over tunic and dress that I made awhile back. The fabric came from one of my shopping forays in Portland, OR. I stitched them on with the twin-needle and woolly nylon combo in random tilted stripes. Then I offset the two long edges by about 1/2” to make it really wonky and twisty: 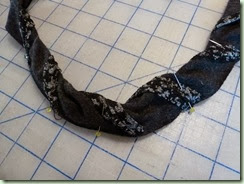 It’s hard to get stitched in place evenly but that just adds to its charm, no? I think it’s really cool but you’ll have to wait for the big reveal. The neckline and seams are done but I have the armhole bindings (those same twisties there!) and hems to finish still.

So what else? Oh yeah. I can hardly bear to show you my Epic Fail: 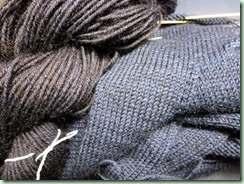 See how that skein on the left doesn’t remotely match those socks on the right? Ummm…I made a mistake in a decimal point when I measured out the acid dye. Can you say “Bad Dyer Damselfly” three times fast? Nevermind. He gets dark toes on his socks. ‘Nuff said.

And there ya go! The sun is out and my studio is actually light enough to see stuff in without artificial help. I should get up there while the getting is good.

Oh, your seams are a dream! Where ever did you learn such things?! Great looking fabric too. I wait with baited breath for the big reveal, Louisa. Well done.