Whew! It’s been a very busy week here in Damselfly’s Pond. Well, what passes as plenty busy for my retired lifestyle anyhow. Last Sunday my son and his family came over for a visit and Princess Silver Fang and I finally managed to get her t-shirt finished. We started it way back in October by scrunch-dyeing some white cotton jersey and tracing her favourite purchased t-shirt for a pattern. We haven’t had much time to complete the project in the meantime. She got the pieces cut out and drew a skull on the undyed white fabric to embellish the front of the shirt. I glued it on with temporary spray so she could stitch it on but that’s as far as we got. I offered to finish it for her for Christmas but she was determined to do more of it herself.

So in a flurry of mad sewing, we finally got the thing put together. It was a combined effort: I did the neck band and the serging but she did all the rest. She really cemented some useful skills like sewing backward and forward, lifting the presser foot and turning the piece to sew the skull. The teeth were especially hard work and turned out very cool. And I forgot to take a photo before she left! Bad, bad damselfly. It fits her but not for long I think. This 9-and-a-half-year-old grandbeastie is getting taller by the day! Funny how that happens.

On Monday and Tuesday I spent a happy time cutting out some of my newly adjusted and/or created patterns. I managed to get 3 tops and the sleeves and bands for a fourth out of 3 metres of charcoal cotton/lycra jersey. This is the kind that rolls up madly in all directions but I love the slightly marled dark gray colour so much. Nearly black but not quite. It has good stretch in both directions but recovers well. I’m hoping to get a lot of wear out of these. The body of the fourth top is going to be in a really textured fabric, kind of crinkly and elasticized. I can’t really describe it well and because it’s black it doesn’t photograph well either. I haven’t cut that part out yet because I want to sew another one of the tops first to see how it fits before committing the scrunchy stuff to the rotary cutter.

Tuesday afternoon ended up kind of crazy. It was quite windy and a branch blew off from one of our neighbour’s huge fir trees. This is directly across the side street from us and I could see it from my studio window. It landed on the high-tension power lines right near the transformers. 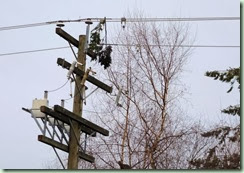 The wind blew some more and the branch contacted and caused an electrical explosion of huge sparks! I heard this otherworldly noise and our power went off for a moment. I nearly jumped out of my skin! Some poor woman was walking her dog underneath at the time and she dashed across the street to our side after nearly getting hit by falling sparks. Yikes!

Thom called BC Hydro to let them know and finally after half an hour a truck showed up. He sat there for awhile making calls and then left. What? Just after he left it did it again! Sparks and power off/on and the horrendous racket. Somebody called the fire department then who showed up, looked and left too. Double-what? After 2 more shorts in quick succession another fire truck (the next shift) showed up and finally blocked off the street. Meanwhile Thom was back on the phone with Hydro who finally showed up with the right gear to fix the problem. The firemen left and we didn’t see what happened next.

Because we had to go out. I was to give my talk about growing and using dye plants to the Richmond Weavers and Spinners Guild and Thom was delivering me. It was a small group but they were very welcoming and I enjoyed yapping about my favourite subjects of gardening and plant dyeing. Luckily I had my trusty Powerpoint slides from last year when I did this talk for my guild. I always forget to say something or other but the gist was there, prompted by my slides. A guild member was kind enough to get me home again.

When I got back, Thom filled me in on the Electrical Nightmare story. The sparks had apparently happed one more time with the Hydro guys watching and They Finally Got The Point! I don’t think they had realised how dangerous it was before. They had to turn off the power and splice in a new piece of high-tension wire before it was fixed. Hah! Maybe if they had done something right away 3 or 4 hours before, it wouldn’t have been such a chore. Meanwhile the entire neighbourhood was completely frazzled!

I was pretty wired that night so it was hard to sleep. But bright and early Wednesday morning we were reminded that we had promised to babysit the littlest grandbeastie, Rosebud (aka the Snot Fairy), for the Whole Entire Day! Oy. Luckily she is the easiest 3-year-old on the planet and we had a lovely day together. She even helped me with my cutting out another garment (a Tilton skirt this time) by placing my rock weights on the pattern, accidentally shifting it after I spent 10 minutes trying to line up the plaid. So helpful! The rocks did keep her busy for quite awhile as she rearranged and counted and filled a basket with them. Then we wound a skein into a ball with the ball winder. Gotta get ‘em started young I say! When I got tired she headed off to play with her grampa. She adores him and it’s really nice to be able to spell each other off. Naptime was conducted easily by taking her for a walk in the stroller. Out like a light. I have to say we were quite happy to see her dad that evening though. Even happy and very fun 3-year-olds are exhausting. We aren’t as young as we were when our two were little.

So yesterday (Thursday) was my weavers’ guild meeting. The talk this time was really interesting: Ann Hamer on dyeing with mushrooms. I had contemplated trying this in the past but never knew whether the right type of mushrooms grew in my area. Ann is from the Sunshine Coast (just north and slightly west of Vancouver) and has access to a huge area of Crown Land forest so she definitely has the advantage of me here in the city. It was particularly helpful though to see the photos of the 3 or 4 most useful types to look for. She showed lovely examples of not only wool yarns but silk camisoles and scarves dyed with her mushroom collections as well as a mushroom paper bowl and pigment crayons. The colours are surprisingly intense and beautiful including reds and oranges worthy of madder and a blue nearly as nice as a light woad. Very exciting.

Ann also answered my biggest question about harvesting. I was concerned about the environmental impact of picking mushrooms and was assured that it wasn’t like harvesting lichens. The main body of the mushroom is below the soil and as long as you don’t disturb the ground they will grow again. Gee. Now I want to try this but I have to wait for next autumn! Darn. As always I want more information so I have ordered the new updated and reprinted book by the late Miriam C. Rice from a company in WA state called Fungi Perfecti. They seem to be the only place this important work is available. In my defence, I’ve been very good about buying books lately and this is the first one in ages. Besides, I got a nice little honorarium for doing the dye talk so it all works out.

Now I’m off to actually start sewing up some of the garments I’ve cut out. More anon!

Interesting info about the colors that mushrooms produce. I'd never have suspected they could give blue & red dyes. Better you than me with a 3 year old!! Once upon a time I enjoyed all my friend's kids - now I just want them to go away. LOL You can tell who's old, can't you???