River, Carry Me Away

I woke up this morning with an absolutely killer migraine. No idea where it came from either. The barometer is steady. I didn’t drink any red wine. Just one of those idiopathic (no known cause) things I suppose. So I plied myself with Advil and plopped back into bed.

It was kind of disappointing though after the lovely day we had yesterday. It was sort-of sunny and relatively warm so Thom and I decided to go for a walk along the Fraser River. For those who don’t know Vancouver, we’re bordered on the south by the north arm of the mighty muddy Fraser as it splits up creating a delta. As this area of industry and patches of scrub forest is developed into housing, the Fraser Riverfront Walk gets a little more complete every year. We started out just past the Knight Street Bridge at the eastern tip of Mitchell Island: 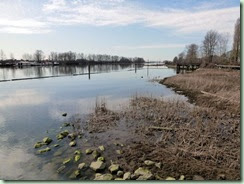 Mitchell Island is that bit to the left there. We followed the river with its busy tug boats, barges and log booms nearly to Boundary Road and Vancouver’s border with Burnaby. Somewhere several kilometres in this direction: 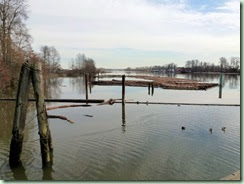 I don’t know if you can see it in the photo (it’s kind of misty) but on the right just above the line of trees is the snowy Mount Baker, a volcanic mountain that, although it’s actually in Washington State, shows up on the skyline over a quite wide area. We call it Flying Mountain because you can see it from places as diverse as Abbotsford and the Gulf Islands. It’s in the Cascade Arc, the same chain of volcanoes as Mount Garibaldi, Mount Rainier, Mount St. Helens, Mount Hood and Mount Shasta. We’ve actually seen most of them, at least the US ones. But I digress. Back to the river.

After we got about as far east as we were going to get because of construction, we turned around and walked back. Happily, halfway back was a quite new restaurant located right on the river trail. Of course we had to stop for beer (him), cider (me) and some yammy fries with chipotle aioli and spicy banana ketchup (shared). It was too early in the day to be hungry for more but it was lovely to sit out on the deck outdoors in the sun. Those of you in colder climes, don’t hate!

A last look at the delightful cloud patterns: 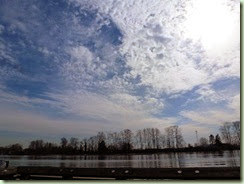 I’m very fond of tree branches against the sky. You can see the patterns they make so well before everything leafs out. We actually saw a few shrubs already starting to burst their buds. Spring is on the way! Really. Our total walk (according to Thom’s FitBit) was about 8 kilometres. That’s not out of the ordinary for our usual walks but I’m feeling pretty out of shape after this winter. Too bad I also ended up with a stupid migraine too.

So what else? I’ve stalled on the skirt sewing because I really think I need to underline this thing or it’s going to be hopeless to wear. And naturally I don’t have anything suitable for underlining. It’s on hold now until I get a chance to go shopping.

Thom has been busy too. Apart from all the pruning and mulching he’s been doing out in the garden, he’s been making cigar box instruments. Here’s his latest babies: 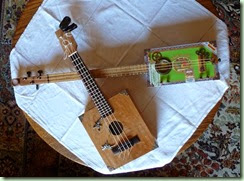 That would be a concert-sized ukulele, named the Fairy Dust Ukulele. Can’t quite see the fairies? Here they are: 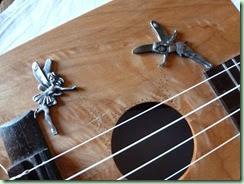 He replaced the top (actually the bottom) of the cigar box with book-matched wood which looks quite lovely. The underside of the uke opens up with the original latch. Grandbeastie Princess Silver Fang likes to keep the “musical notation” for her own composition in there. So cute.

The other item is another 3-stringed cigar box guitar, this one with frets, and titled the Steampunk Guitar. See some of the not-really mechanical details? 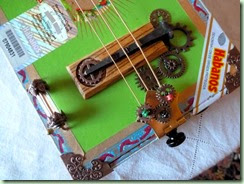 The bridge is the iron nail that was forged for us when we were in Cape Breton at the Highland Village Museum. Also palm trees are visible inside the opening: 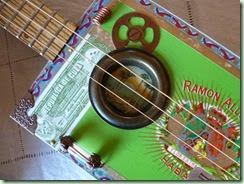 There’s even a faux pressure gauge on the top of the neck. It’s very fancy! Thom got really wise this time and used some of my Mod Podge to coat all the paper labels on the cigar box. He didn’t do this to the first guitar he made, Romeo y Julietta, and it’s looking quite worn after 7 or 8 months. Well, at least he plays them! By the way, the two guitars are designed left-handed (aka upside-down) because although Thom is right-handed he finds it easier to play lefty. His left wrist doesn’t turn freely so it’s awkward to finger with that hand.He made the ukulele the right way around though so the grandbeasties can practice on it. He can still play it anyway because the neck is so short. Nice that when you make your own things you can customise, huh?

So that’s it for now. Me and my headache are going to knit some. More anon.

What a nice long walk the two of you were able to get in between the bouts of weather. But a migraine is no joke. Love the cigar box musical instruments. Now what's with having to line your Tilton skirt?

A nice walk. Glad you enjoyed it. Some nice shots.

Tell Thom that his ukeleles are fabulous! My goodness you are quite the creative pair. Hope your head is feeling better.

And Thom replies: "Thanks for the kind compliment, Heather!" Wait until you see the amplifier to go with the guitars...