Almost another week flew by when I wasn’t looking! I guess that means I’m not bored at all, right? The weather has been alternating dumping rain and not-so-dumping rain. We’ve been trying to dash out for a walk whenever it takes a breath. It’s been relatively warmish though and plants are definitely starting to wake up. Thom’s been spouting the anti-version of GOT’s Ned Stark, “Spring is coming!” Yesterday we saw a fully blooming red rhododendron which is very early. Also the first few daffodils along with the crocuses, snowdrops, miniature iris and hellebores. Lots of swelling buds. Good thing we live in one of the most expensive areas in North America, huh? Or everyone would be moving here to avoid another extreme winter like they’ve had everywhere else.

Continuing the spring theme, I’m going to have to start planting seedlings soon. I’ve been hesitating because the garden is still too squooshy to dig. If the plants are ready too early there’s no garden to receive them and then they get set back. When they finally get planted they don’t grow properly. I’ve found it’s better to be a little later and get things off to a good start. Sometime in the next couple of days I’ll wash up the flats and get the first seeds going. Parsley especially takes forever to germinate! And I have an order from Milady Daughter who eats parsley by the fistfuls and has done so since she was about the same age as her little daughter, the darling Rosebud. Gee, why plant your own when mom will do it for you? And tomatoes too, if you please. And some cucumbers. And of course some for the other offspring and his family as well. Good thing I have the Grow-Op set up.

So back to all things crafty. Here’s the socks finally: 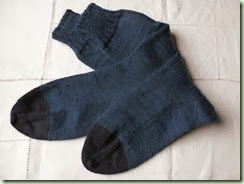 For: our niece’s boyfriend

Comments:  I had only dyed 2 balls and stupidly made the legs so long that I ran out of yarn just before the toe decreases. I tried to dye my one last ball of this yarn to match and ended up making a decimal error and getting it way too dark! Used it anyhow. I was done with these. Anyway, I’m sure he’ll like them just fine the way they are.

For some reason I’ve been knitting the legs longer and longer on recent pairs of socks. For myself, I like them to come up above the tops of my Blundstones. (Wish I could make my own legs longer too! Oh, never mind.) Thom likes his socks longer to keep his bare legs from getting cold and showing skin under his jeans when he sits down. Apparently his legs are very shy. Unfortunately this tendency to knit longer before turning the heel does include the risk of running out of yarn before the end of the toes, especially on the larger pairs. These weren’t particularly large but I definitely made longity legs! Oops.

Next up we have my usual crappy photography and a sewing project: 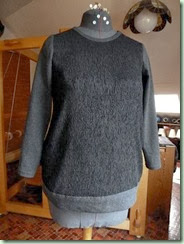 Mods:  None except added a wide bottom band. Used Marcy Tilton’s neckband application method (from The Ultimate T-Shirt class on Craftsy) for both neck and bottom.

Comments:  I was inspired by this top: 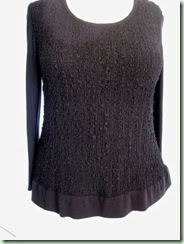 I think I saw it on Marcy’s website somewhere but darned if I can find it again. Lost the original link. Anyway, the minute I saw it I knew what that sproingy fabric lurking in my stash finally wanted to become. I’ve had it for a few years and I wish I kept better track of my stash so I could tell you where I got it but it was probably Dressew. (Still have enough left for something else but what? It has wonderful fringed selvedges too.) The colours in the photo of my garment have been lightened slightly so you can see the details. The true colours are black and dark charcoal grey.

I was a little nervous about how well this odd fabric sewed up. It’s quite thick due to all the crinkling and the neckband is 2 layers of it plus 3 layers of the jersey. It stretches a lot in the width-wise direction but not at all in the length. This made it necessary to stabilise the shoulders well but made it difficult to install the sleeves smoothly. They ended up with some odd wrinkling issues but nothing that will stop me from wearing this. One regret – when comparing the two photos (mine and the inspiration) I’m now wishing I had used a fuller width on the bottom binding to make it a little more ruffled instead of it pulling in slightly. I was thinking at the time that it was supposed to be less ruffled but that the fabric was working against it. I was careful to avoid that issue on my own top but now wished I hadn’t. Sigh. No fixing it now.

It’s surprisingly airy and cool so this time of year it needs an under-layer though it will be handy when warmer weather finally comes around.

Another garment done. There’s lots more to go that are all cut out in heaps around my studio!

Yesterday I indulged in watching another one of my Craftsy classes. This one is Custom Fitting: Back, Neck and Shoulders with Kathleen Cheetham. So far I’m finding it a little tedious after the Tiltons’ brisk tag-team action in the last class I watched. Her presentation style is very methodical and she totally reminds me of one of my high school sewing teachers. This will appeal to the more beginning level sewist but I’m finding I want to move her along faster. (But instead I just keep knitting!) It was fun to watch how she uses the French curve where I would just sketch in the line by eye and also how she pokes holes with an awl to transfer pattern lines through the paper. I would either trace over it with a pencil or if the paper is too opaque, use my needle tracing wheel. Such a rebel, eh? Good to see different methods though. You never know when a particular technique will be worth knowing.

Kathleen is best known for her line of patterns, Petite Plus Patterns, and a book for Singer, Perfect Plus: Sew a Mix-and-Match Wardrobe for Plus and Petite-Plus Sizes. I find her garment styles pretty basic and conventional but I’m sure she has quite a large audience that would fit well into her shapes. Her other class available on Craftsy is Adjust the Bust which, along with something on sleeve caps, would cover the trickiest fitting issues for most people. Lengths and widths are easy-peasy once the critical sections are working ok.

I’m personally neither a regular size nor a plus-size but have parts of both! My neck, shoulders and arms are quite small but my bust is larger and waist and hips larger still. I’m also short enough at 5' 3-1/2" to be a petite but my torso is not. I have to shorten the arms and legs on patterns but not the body. Sounds pretty ghastly, doesn’t it? LOL!! I am what I am and there’s really no point wishing I was still a willow-slim 20-year-old. The old bod’ still works pretty well so I’m not really complaining! (Not too loudly anyhow.) However it hasn’t been easy learning how to fit this aging flesh so that I can dress in a way which pleases me. But I’m getting there. I’m quite pleased with the obvious advancements in my skills.

As an interesting aside I noticed that they have Kathleen as being from Sointula, BC. That’s a really fascinating little village on Malcolm Island, just off north-eastern Vancouver Island. The name means “place of harmony” and was settled by Finnish utopian socialists in the early 1900’s. There are still some descendants of the original Finns but recently more wealthy retirees are moving in. It’s also the head office of the Living Ocean Society, an NGO dedicated to marine conservation. I haven’t actually been there but we once drove by the ferry wharf in Port McNeill on our way to Port Hardy and the Inside Passage ferry. It would have been nice to have had time to explore. Maybe one day when we save up enough to afford the ever-increasing expense of BC Ferries! There’s quite a lot of interesting places to visit in that area.

Well, Thom was off at the crack of dawn this morning to attend a woodturning demo. I should go get a few things done before he returns sometime before supper. More anon!