The weather is lovely and sunny and we’ve been busy. Thom has been working diligently in his studio, cleaning, sorting, vacuuming up the spiders, washing walls and painting. He’s still not quite finished but the lure of the outdoors has been too much to resist. So after we took a nice long walk yesterday and a sushi lunch, he was out in the garden pruning the laurels (Prunus laurocerasus, not true laurel). Those things need constant hacking back or they tend to take over the world! Luckily you can chop them anywhere and they sprout new leaves and fill in the gaps practically overnight. They even root easily from a cutting so they can become a nuisance if not kept in check. I do love the almond-smell of the leaves when run through the chipper-shredder though. It makes great mulch under the blueberry bushes.

While he was doing that, I’ve been mini-gardening. These babies are still being brought indoors on cold nights: 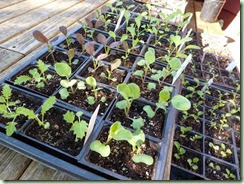 They’re growing quite nicely and hopefully will be able to be planted in the garden soon. They first have to be big enough so the slugs can’t immediately eat them off! That’s the biggest reason that I plant nearly everything (except peas and beans) in the house first. There’s just no point in direct sowing anything else. Here’s my handy grow-op: 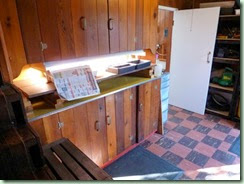 There’s tiny tomato plants, Japanese indigo, coreopsis, red alyssum, basil, cilantro, coleus and more under the lights. The newspaper is covering some sunflower seeds that I just planted. Next it will be the squashes and cucumbers but I’ll wait a week or two more first before planting them. I don’t like to hold them in pots for long and want the ground to be warm enough when they’re ready to go in. See the cupboards above and below the lights? I spent all afternoon yesterday cleaning those out. I got rid of all the junk and now have better storage for the stuff that’s left: seeds, pots and flats to plant them in, potting soil, netting for the garden, bird seed and suet. Also a few other odds and sods. Our house may be small but it does have a lot of storage spaces. Which tend to NOT get sorted out often enough. We’re trying to catch up.

That’s the door to Thom’s studio and in the course of cleaning it up he also cleaned up the shelves behind it and painted the outer concrete foundation. So now it’s my job to finish washing the floor. Those black and red vintage linoleum tiles might not be in perfect shape but they’re practical for an area that’s right inside the basement door and subject to a lot of mud and dirt, tools and equipment, and bicycles being dragged in and out. Yes, that’s the sunshine coming in the open basement door! Love it.

Best get on with my day. Moving right along…

You need a two foot high cold frame with an old waterbed heater pad in the bottom. Works like a charm!!! Styrofoam makes a good insulator too. Used to have one with old windows on the top. Worked a treat & no slugs could get in. I do miss it.