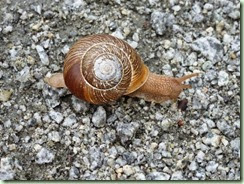 We survived the weekend with the Bigger Grandbeasties (ages 7 & 9) while their parents were away in New York but it was a near thing! I must be out of practice with the parenting thing. It was fun but also kind of exhausting. And we didn’t even have the main part of the child care – their maternal grandma stayed at their house during the week while they were in school. They live about a 1/2-hour away from us (if you take the freeway) so it’s not practical to keep them here and drive back and forth twice a day. Yesterday however we had to do the delivery and managed to get them to school just before the bell. Whew! Luckily their grandma took over again after school and stayed until today. Their parents didn’t get home until the wee small hours this morning. We only know because their car has disappeared from beside our house! They didn’t want to wake us so they slipped away quietly. Our house is quite near the Skytrain line to the airport so it makes a good place to begin a trip but it doesn’t run in the middle of the night so they had to take a cab back. Hope they had fun! They’re probably still trying to catch up on sleep.

After we dropped the kids off yesterday we decided to go for a walk on the trails in Colony Farm Regional Park. This former farm was once part of provincially owned Riverview Hospital and has been fallow since the 1980’s. Some enhancement has been done for fish and birds and there are several trails along the dyke and around the edges. The plants are fairly bursting out with new spring growth even though the weather has still been rather cool for this time of year. 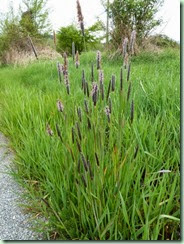 I love all the different grasses and the salmonberries are blooming: 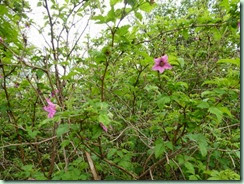 My favourite part of this park though is the Community Garden. (There’s a good article about it here.) I always love to check out how other people grow veggies! We have lots of community garden plots around the Lower Mainland, many of them here in Vancouver, but this one is just huge! It has a number of sections surrounded by grass pathways (very soggy right now) and the individual plots are a good size, not the usual postage stamp. 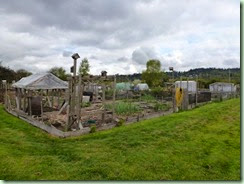 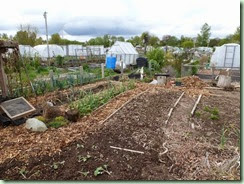 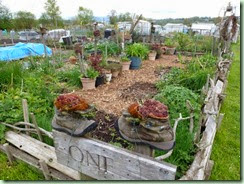 There are hoses set up to use for watering in summer and many plastic-covered greenhouses. Also lots of interesting garden decor and bird houses which the swallows were making good use of. We could hear peeping inside more than one of them! It’s pretty early still though so not much was actually planted yet. The garlic is all getting tall and there was rhubarb that could be picked. We even saw some nice kale buds but nobody had harvested them. No, we didn’t do it ourselves! Come summer this place will be bursting with produce, so much so that they have to have signs saying no picking! Can you imagine somebody waltzing in to somebody else’s garden and just helping themselves? How rude!

I did get a chuckle out of this sign though: 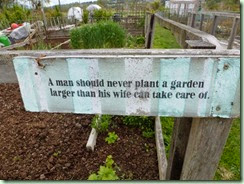 There’s potential fruit here too. The blueberries were in bloom: 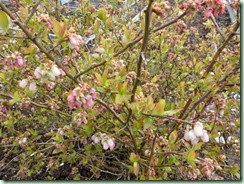 They grow very well in our climate and acidic soil. Ours are also blooming now much to the dismay of our grandkids who would prefer berries all year around! They just need a little patience. Heh.

These apple blossoms were pretty and smelled heavenly: 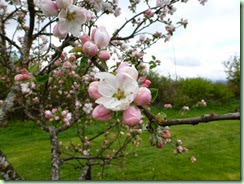 They have other fruit trees as well. We’ve tried to grow apples (and Italian plums) in the past but they didn’t do very well so we just stick with the berries in our garden now.

It was a very nice walk and luckily the rain held off until we got back in the car. I really needed to get out in the air.

Meanwhile, back in the studio I’m currently attempting to cut out a jacket from slippery squishy silk/rayon velvet. I’m supposed to be ready for a devoré (burnout) session with my Spectrum Study Group on Thursday. Finally we’ve hit on something that everyone is interested in doing! Amazing. I’ve had this fabric in deep stash for years (maybe 10?) and planned on learning how to do this ages ago but it’s taken a challenge from my friends to get me to actually follow through. I’ve yet to dig out my FiberEtch if I can find it which may not even be viable after all this time. Testing will ensue. Otherwise I’m sure we can share. I only plan to use the burnout on the sleeves and collar band and leave the rest of the body opaque. It will subsequently be dye-painted with Procion MX dyes and maybe even get an immersion bath in acid dyes to give more depth to the silk backing. We’ll see how it goes.

But first I need to cut the thing out ready to go. I’m using Katherine Tilton’s pattern B5891, view C/D: 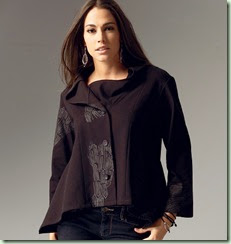 In the interests of time-saving I’ve already fitted this jacket for me though the fabric of the first one is quite different, a heavy brushed cotton twill. I wear it all the time so it was very successful. This time I’m making some modifications to the original and will probably wear it more like a very fancy sweater. I’ve overlapped the princess seam (which in the original is just a seamed section and doesn’t include shaping) and also put the back seamline on the fold and then gently curved the neckline eliminating the asymmetrical collar and button overlap. I’ll cut out a collar/front band that will finish off the fronts and neckline in (hopefully) one strip. Unfortunately I only have 2 metres of the velvet so I’m going to have to squeeze to get the pieces on it. It washed and dried to a little less than 45” (115cm) in width so it’s quite narrow. And of course I have to go with the nap, right? Some creative folding will be necessary methinks. More on this later.

Nothing much else to report. Plugging away alternately on knitting the gloves and the test sock. I have 1-1/2 gloves so far – only 2-1/2 more to go. Including 30 fingers. Ulp! What have I gotten myself into in my quest for new gloves?

The garden hasn’t come along much farther than last time. Things are still growing but mostly aren’t planted out yet. The weather has warmed up slightly, enough at least that I was able to leave many of the earliest flats out on the deck last night and only brought the tomatoes into the house to join the squash and cukes under the lights. This is progress of a sort. Ideally I’d like to see it warm up at to least 10C at night. I haven’t dared plant the beans yet either but then mid-May is the best time here so I’ve got a couple of weeks.

Moving right along. Go cut out the jacket, damselfly!