A Slight Glitch Or Two

After I smugly said that we were finished with the veggie and dye gardens and would be getting out to the front garden next. Best laid plans and such. Well, I had a wee accident, nothing serious but it has slowed me down a little. Silly me managed to bump my head while entering the low door on our garden shed. That didn’t hurt much at all but I was bent over at the time and caught my balance at an awkward angle. I ended up pulling a muscle (or maybe more than one) in my thigh. After gimping around for a couple of days it’s definitely been improving quickly. Thank goodness. I hate to be incapacitated in any way. It’s happened too many times in the past, usually to my hands, wrists or neck. I’ve finally gotten strong and reasonably fit! Don’t mess with this little old lady’s success, please.

So meanwhile I spun up some more of my Rainbow Dark yarn. Of course I’m not done all the hackling yet but it was nice to do something different for awhile. Yes, I used my good right leg while resting the gimpy left one. However, as I was happily ensconced out on the deck in the shade with my spinning wheel there was a loud snap! The connector that joins the footman to the treadle had finally given up the ghost: 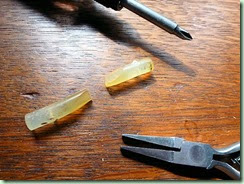 My Louet S90 wheel (aka Klaas) is a mere 22 years old so I can’t really understand why this nylon flex piece should get all brittle and break into 3 pieces, one of which we never did find. The horror! What to do? Firstly, I put out a plea to darling Jane at Jane Stafford Textiles who is our closest Louet dealer. I wasn’t sure whether or not the replacement part on her website was the correct one for my elderly S90. She got back to me to say it would work so I put in my order. However, in the meantime Thom & I got a cunning plan to at least get me up and running again while I wait for the part to come in the mail. Do you see how I’ve always thought it looked like mini hot-glue gun stick? Yep. We tried a glue stick in there and hey, it’s working so far! 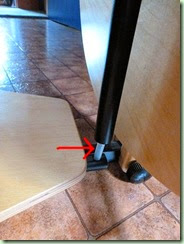 It’s a teeny bit more flexible and a little narrower in diameter but it fit and the holding screws went in easily. Don’t know about its longevity but I still have half of a package of these things so it could be replaced again if necessary. The new connectors from Louet are black and I don’t know if they’ve used a different quality nylon or not from the old version. Apparently this is quite a common breakage anyway – along with the stretchy drive band which I’ve already replaced recently.

I’ve been counting the number of lengths of hackled tops that I’m getting onto one bobbin so I can repeat the action with succeeding bobbins-full. So far this is 10 and I figure I can get 2 more on here: 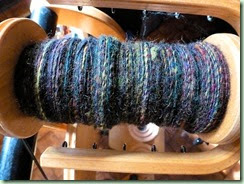 That will divide nicely so I should end up with 6 big skeins when I’m done. I love large skeins of yarn! So many less ends to work in. I’ve never understood the yarn industry’s insistence on dinky little 50g skeins when at least 100g is much better and more is better still. They could probably make them any size they liked! Hey I know, I’ve had it explained to me that knitters don’t like to have lots of leftovers. So they can buy 13 small balls of yarn for their sweater instead of 7 big skeins. It probably seems more economical but wouldn’t the larger skeins cost less to package up? Half as many labels and all. And don’t knitters buy an extra insurance ball or 2 anyhow? One thing for sure, when sock knitters were constantly buying two or even three 50g balls of sock yarn, manufacturers started packaging them in 100g balls! I can get a pair of socks out of one big ball for all but the largest guys’ socks. Or knee socks which need a ball plus just under a half of another and we’re back around the argument again, aren’t we? (I fixed that leftover though by making shortie socks from the remainder! Heh.)

As a spinner I tend to err on the side of way too much yarn for a given project. You can’t go out and buy more if you’ve spun up all that particular blend of dyed fibres. Matching again is very hard if not impossible to accomplish. You don’t want to run short or you will have to get creative which might not be what you had in mind. I’d rather get creative with the remainder after I’ve finished the project. But that’s just me. Spinning yarn might be work but it’s usually much cheaper than buying a similar yarn already spun up.

Heading out shortly to my weavers’ guild meeting and spring potluck with Thom in tow. He’s representing his woodturners’ guild as we start to put different craftspeople together for a big gallery show next year to celebrate the Year of Craft in Canada. He and I are already partnered up and starting to discuss some ideas for our collaboration. This is going to be fun! Well, life usually is. Unless you pull a muscle in your leg when you don’t expect it. Sigh. At least that’s just a temporary glitch.

Oh so sorry to hear about your gimp or glitch. Both your leg muscle and your spinning apparatus. At least one of them was an easy fix. And the other is temporary. Your spinning yarn is another one of those amazing fairy tale things. How cool is that to be collaborating with Thom for a craft extravaganza?!

Hope you are feeling better already. And the Year of Craft in Canada?! I had no idea! I'll have to get something going on Gabriola.

Sorry to hear about your 'glitch'. I know how you feel considering all my 'glitches' in the past three years!!! Have to say this warm weather is sure improving mine. Hope yours heals quickly. Love the yarn by the way.

hope you are back to full speed soon. marvelous temp. fix on the spinning wheel. Year of the craft sounds like a great idea.