This isn’t going to be a very long post because I’m expiring with a very nasty migraine today which my usual medication refuses to affect much. But since it’s been awhile and somebody might be wondering how yesterday’s Kumihimo Class #2 went, I thought I’d suck it up. Just for you. Besides what else do I have to do besides lie around and read and knit while Thom keeps serving me tea and the occasional ibuprophen? (He’s adorable.)

The weather was threatening to include some rain but it kindly held off so I could set up the outdoor classroom, otherwise known as the lower deck. Everyone showed up this time so I had 8 and luckily there were exactly enough equipment kits for all. With one small exception: I found out at the last minute that I was short 8 bobbins in each of 3 of them but luckily had the bolts and nuts which only had to be assembled. The threads of the bolt have to be wrapped with a strip of cling wrap to protect the threads, the nut screwed on and a leader string attached. I got most of them done before everyone showed up and the rest finished later while they were busy setting up but I needn’t have bothered since we never got past 8-strand braids anyhow. Unfortunately I didn’t sell any of the kits this time either. Perhaps they were reluctant because I still need 6 sets for yet another proposed class, not scheduled as to date yet. However I would eventually like to sell them all so I’ll have an excuse not to do this again more space in my attic. I can always put an ad in the guild newsletter next autumn and hope there’s still some interest.

Anyhow, I think a good time was had by all! We got quite a lot done. Everyone was making nice braids and, apart from a little frustration at one of the more difficult ones, I’d say they all learned at least the basics including preparing the warp, setting it up on the marudai, attaching and winding on the bobbins, how to read the diagrams and how to hold the threads and move them around the “mirror”. After that it’s just practice, practice, practice. One does need a marudai to practice on though. Just sayin’.

As we were winding down around 3:30pm we felt a small drip or two of the wet stuff. It never amounted to more but it encouraged everyone to pack up more quickly. I had lots of help getting all the books and yarns and paraphernalia back into the house. My dining room looked like this after the storm of kindly assistance: 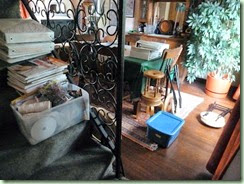 Well, I didn’t expect anyone to put it all away! That’s my job. Since Thom was off at his mom’s we also had to put the big folding table away in the shed by ourselves. It’s very heavy (thick particle board with metal legs) but we managed. Can’t leave it out because it’s definitely NOT outdoor grade particle board and I didn’t want it to dissolve into a pile of sawdust. And it did end up raining but not until sometime early this morning. It’s pretty nice out now. Even if I don’t care because it’s too bright for my poor eyes! At least it saved us some garden watering.

Now for the true confessions. I felt I was more relaxed the second time, at least once I knew the weather was going to hold off. But I made two mistakes: one was not taking any medication for the headache that was already starting when I woke up yesterday morning (obviously I was in denial) and the second was totally forgetting to put in my hearing aids. Doh. I seemed to manage OK because didn’t even realise I’d forgotten them until things were pretty much over. I was probably talking louder than normal! But I definitely should have taken an Advil or 2 before class started because if I had gotten it early perhaps it might not be so much worse today. Grrr…

In knitting news my Rainbow Dark sweater is coming along nicely. I’m cruising down toward the point where I need to divide for the sleeves. More later!