Time Got Away Again

So how did it get to be the second week of July already? We had the Grandbeastie Boy here for a couple of days while his dad was busy and mom and sister were in England. It was their Great-Grammy’s 100th birthday so it was decided that all four generations of females should celebrate! I wonder if she got a card from the Queen? Not that I’m any kind of Monarchist but that would be kind of cool.

Anyhow, we had fun with a 7-year-old on his own without Big Sister. Got ice-cream, took him to the water-play park, played computer games and Play-Doh, read stories – it was hard to say who wore whom out first!

Then, after delivering him back home we went camping for 3 days at EC Manning Provincial Park with Thom’s brother and sister-in-law. It was totally cute in our almost matching VW Westphalias! The 25-year-old vehicles drew a little attention from campground passersby. Now I’m wishing I’d thought of taking a photo of the vans, dark blue (ours) and light blue (theirs), with their awnings out and tops popped. So comfy.

The weather in Manning was mostly lovely, warm and alternating sunny, cloudy and an occasional tiny sprinkle of rain which evaporated almost immediately. We got lots of walking in: around Lightning Lake (both halves), up the Gibson’s Trail and on the last day to Shadow Falls: 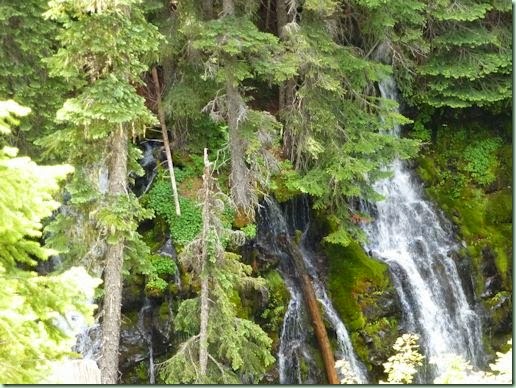 I think this is Red Mountain (below) but I’m not sure. It’s visible from the Three Falls Trail anyway: There’s still snow on the tops of a number of the mountains in the park. We saw bear scat and where they’d clawed off the tree bark in several places but not the bears themselves luckily. This pileated woodpecker entertained us for at least 15 minutes, only a short way away at the edge of our campsite on a fallen log: 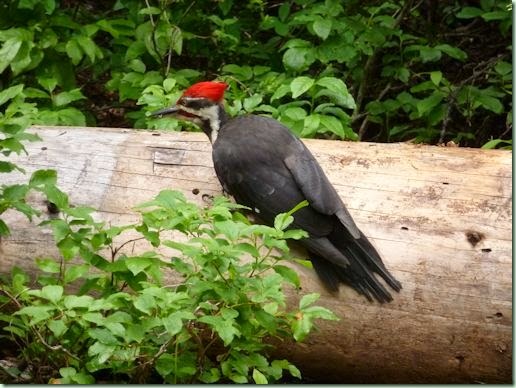 They are big birds and the inspiration for the old Woody Woodpecker cartoons! Their laugh is so silly. We also saw a pair of ospreys and this momma spruce grouse: 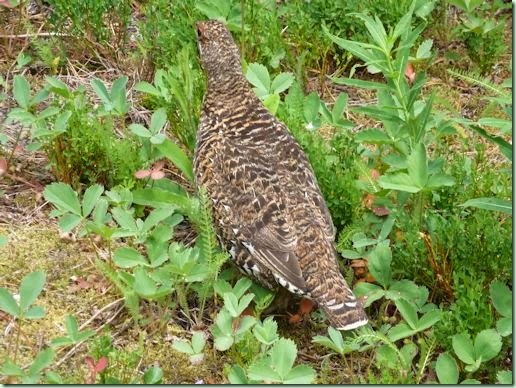 Her 3 babies flew into the bushes as soon as we came near but she stayed and slowly walked away toward her chicks. Left me plenty of time to get out the camera!

After we got home on Sunday evening we were happy to see that it had rained enough while we were gone to water the garden somewhat. It’s hard to leave it this time of year especially when it’s been so hot (currently 27C or 80F). Yes I know that’s not particularly hot for some places but it’s hot enough for us! My Japanese indigo is big enough now to do a dye vat – perhaps next week. Though I have my last Kumihimo Workshop to teach next Thursday too. Crossing fingers for good weather again.

Speaking of crafty things, my Rainbow Dark Cardi is done but I’m still waiting on a button from Thom before the final photo. Not happening yet. It’s too hot to wear it anyway or I would just pin it with one of my shawl sticks! In return, I am finished his Grey Tabby Socks but I’ll save the reveal for next post. What I did want to mention was the weaving. Sigh. I got the warp on the loom. Looks lovely from the back: 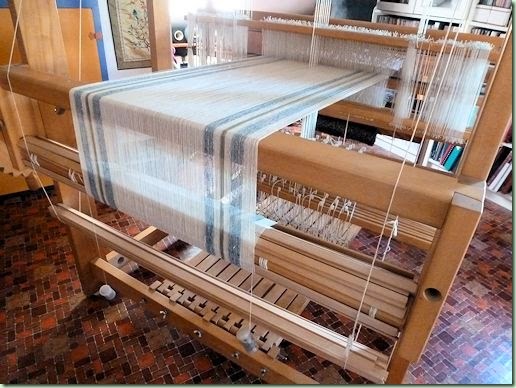 But I’m having trouble with the tension because of that handspun blue jeans/hemp which is far more stretchy and thicker than either the hemp or the green cotton. I carefully tied on to the front beam: 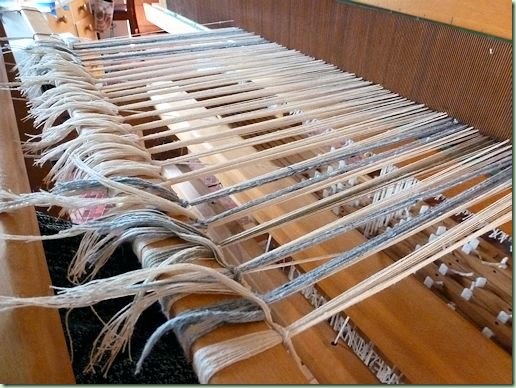 And then wove a little but it was making big “frowns” at the blue stripes. That means the weft wasn’t beating in properly at those areas. So now I’m trying to re-tie those sections to try to make them as tight as they can go. This may be futile. It’s all my own fault for not thinking it through. I should have known this would happen and just dyed some of the hemp yarn to get my stripes. Sadly I may still have to do that if I can’t fix it. Or re-sley those sections wider? That would be a lot of effort and it still might not work. Grrrr…

Why can’t this just be a simple straightforward project?

I know. Just because. Right now it’s too stinkin’ hot up in my studio for me to care about wrestling with an uncooperative warp. I’m knitting on the Ophicleide Cardi instead. And I’ve started a new pair of socks, toe-up. I was going to make another pair of short socks for wearing in my shoes (as opposed to my Blundstone boots) but the yarn is looking so nice I’m tempted to go taller. Not quite sure what I’ll do yet but I don’t have to decide until I get past the heel flap anyway. Maybe I can get 2 pairs of shorties? If I run out at the end of the second pair I can do something different for the cuffs. Decisions. Decisions.

More soon! Stay cool! Or warm, as the case may be.

30° here today, way to hot for me, and even warmer stuff in forecast. Yuck.

what a pain. can you put a dowel through just the misbehaving yarn at the back beam and weigh it at either end to take up the slack. just a thought. lovely photos of your camping.

I also thought of that dowel trick, Jean, and that might be an option to try too. I'm not going to throw this whole warp away! Something will work. Eventually.